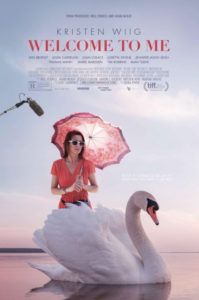 Welcome to Me straddles the line between careless insensitivity and truthful poignancy. Kristen Wiig stars as Alice Klieg, a woman who suffers from a scathing case of Borderline Personality Disorder, and has recently stopped taking her medication. After winning an $86 million lottery jackpot, Alice resolves to write a check for $15 million to an infomercial company in exchange for a television show in the vein of Oprah Winfrey, whose talk show Alice has studied on countless VHS tapes. Painfully awkward, self-obsessed, and potentially a danger to herself, Alice proceeds to deliver two-hour episodes of “Welcome to Me”—a program dedicated to herself. Whether she’s neutering dogs, reenacting painful memories from her childhood, or showcasing segments like “Smelling Things Before They Happen”, the result is both troubling and hilarious as an oddity.

Director Shira Piven (wife of Adam McKay, who co-produced alongside Will Ferrell) and screenwriter Eliot Laurence represent Alice’s situation as both funny and complex. At times, the audience is unsure if we’re supposed to be laughing at or crying for Alice, although the answer is probably both. Every moment is uncomfortable in some way or another, and the film overall proves just as amusing as it is sometimes disturbing. Consider her first appearance on television during the press conference for her lottery win. She reads from an oft-used “prepared statement” and begins to tell her life story, her later altered childhood diagnosis of bipolar depression, and her years of numbing the pain through masturbation. The moment is instantly funny for its shock value, but also quite sad because she’s telling the truth.

Wiig delivers a deceptively complex performance. She’s somewhere between one of her offbeat, deadpan roles in sketch comedy on Saturday Night Live and her achingly raw character from The Skeleton Twins. Indeed, this isn’t the audience-friendly Wiig from Bridesmaids. She’s stripped down (literally, in one vulnerable sequence) and singularly weird, yet as always fully committed to bringing her character to life. Wiig is a rare kind of actress, capable of real comedy and real drama. She achieves both at once in Welcome to Me, although figuring out which scenes are which lands on the viewer. When Alice recites dialogue worthy of an infomercial (“It’s not about luck, it about the power of the mind,” she says), she’s demonstrating the signs of someone who never, ever shuts off her television. But when her show features a dramatization of a traumatizing moment from her youth, she reveals an unbearably tender, sensitive side.

“You’re an emotional exhibitionist,” says Alice’s mother, just one of the guests Alice brings on the show via call-in. She also tricks her shrink (Tim Robbins) into making an appearance, though he’s more concerned about her well-being and tries to get her involuntarily committed. To be sure, every moment of Alice’s show could be called over-sharing. In the studio, her show’s director Dawn (Joan Cusack) feels just as conflicted about the experience as we do, while her greatest advocate is Rich (James Marsden), the show’s producer, who’s more than happy to keep Alice on the air if she keeps the checks coming. Rich’s brother Gabe (Wes Bentley), a sex addict and infomercial host for protein drinks, quickly finds Alice’s sexual directness appealing, though we’re forced to contemplate whether he’s using her, given his knowledge of her mental illness. Many of Alice’s relationships with people are never really resolved in the short runtime of 86 minutes, and in that respect, the film is much more a singular character study.

As the supporting characters in Welcome to Me ponder if Alice is dangerous or just weird, an artist or an exhibitionist, the viewer feels equally conflicted. Some of Alice’s behavior, particularly toward her best friend Gina (Linda Cardellini), proves insensitive and contemptible as Alice becomes a late-night sensation and students write term papers comparing her to Cindy Sherman. Inevitably, everything in the film comes to an emotional head and resolves itself in an artificially conceived telethon finale, but the dramatic underpinnings of Alice herself never wane. Wiig delivers a sensational performance in a film that deserves comparisons to uneasily funny titles like The King of Comedy and Being There, and perhaps like those films, it will only improve with age, reassessment, and time for clarity.