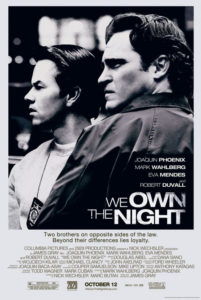 Hollywood is fascinated with fate. There’s an endless list of movies where two friends, family members, or seemingly unconnected people depart from each other on different moral paths. Take Michael Curtiz’s great Angels with Dirty Faces, where two young friends are chased by police and only one gets away; James Cagney’s character is caught and grows up in juvie schools until he’s bred into a criminal, while Pat O’Brien’s character escapes and becomes a priest. Martin Scorsese’s The Departed features two men, one a cop (Leonardo DiCaprio) and one a mole for the Boston mob (Matt Damon), both undercover in their other’s institution, both split between the police force and the mob. We Own the Night offers a similar setup. It’s about the Grusinsky family in 1988, Brooklyn, whose two sons, Bobby and Joseph, are on opposite sides of the law.

Bobby Grusinsky (Joaquin Phoenix) runs a nightclub that flows with drugs, Blondie music, and the kind of wild nightlife only New York City in the 1980s could offer. He turns a blind eye to the underhanded goings-on therein, such as the Russian drug dealer Vadim Nezhinski (Alex Veadov) using the club as his own personal base of operations. Bobby walks on the line bordering criminality and indifference, and he’s unconcerned with ideas of ethical responsibility, much to the chagrin of his family. Bobby’s father, Burt (Robert Duvall), is the police chief, and his brother Joseph (Mark Wahlberg) a skilled cop. They’re after Nezhinski, and they want Bobby to inform. Bobby doesn’t even go by the Grusinsky name; he goes by “Bobby Green” so as not to associate his cop family with the criminal underworld he shyly embraces, and certainly ignores. When he refuses to work with his family, he draws a line between them. That line is tested when Bobby learns that Joseph is in the hospital recovering from a gunshot wound, likely delivered by Nezhinski’s men.

Bobby holds loyalties to his club’s owner, Marat Bujayev (Moni Moshonov). We get a slim impression that Bujayev is something of a boss, but when comparing this Russian mob with the one David Cronenberg depicts in last month’s Eastern Promises, well, there’s simply no comparison. Cronenberg took his time in building real dread and danger in his Vory V Zakone family. We Own the Night draws attention away from the rather blatant criminal element, which isn’t described beyond a basic sketch of drug deals and automatic weapons. But then again, the bad guys aren’t the focus of this film.

The title refers to the credo of the NYPD in the 1980s. Their intent: to reclaim the streets overridden with drugs and crime. We hear “it’s falling apart out there” more than once. Cops get shot and killed every day, it seems. Any pre-Guliani New York cop movie shows a city polluted with crime and garbage in the streets. In one scene, children are shown laughing at an officer’s funeral procession. That’s the attitude these police officers are fighting: complete disdain for New York’s finest—an attitude less likely to occur in our post-9/11 world. And frankly, it’s a more interesting, dangerous, and dramatic period for a movie.

Phoenix gives another great performance, this one more dark and damaged than we’d expect. We Own the Night is not just a revenge story; it’s a morality tale. After his brother comes close to death, Bobby stops teeter-tottering about his principles. Phoenix typically shines when his characters are at all-time lows; the troubling aftermath scenes between Bobby and his girlfriend Amada, played by Eva Mendes, are superb. Amada is loyal and loving, and not your typically transparent crime movie bimbo. She has some real substance. Director James Gray is careful to include scenes that show all the turmoil of Bobby’s familial tragedies affecting her, making her more than just the protagonist’s female garnish.

Writer-director James Gray also made The Yards, another film starring Joaquin Phoenix and Mark Wahlberg, only that one had its eyes on Wahlberg. Here, we see where Wahlberg should stay, in stronger supporting roles, just where his Oscar-nominated performance in The Departed placed him. His role as Joseph makes way for Bobby’s central ups and downs, but he provides more than a one-note presence.

Where the film succeeds best is its action, namely intense sequences ranging from a deafeningly quiet car chase to a shootout in a drug warehouse. These are typical scenes for this type of movie, filmed with attention to their innovative delivery. Though we’ve seen this film before in various forms, Gray concocts a well-laid plan for a satisfying crime drama. He may not be Scorsese, and this certainly isn’t The Departed, but it’s pretty damned entertaining.