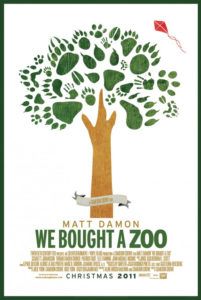 We Bought a Zoo is writer-director Cameron Crowe’s first fictional effort in six years, following his flop Elizabethtown and before that his misguided Vanilla Sky. It may not feel like a return to the glory days of Say Anything and Jerry Maguire for Crowe, but it’s a touching enough endeavor with the substantial emotional backing we’ve come to expect from his work. The screen story follows a Los Angeles-based writer, Benjamin (Matt Damon), who quits his job and buys a dilapidated zoo after his wife dies, all in an effort to start anew with his two children, the troubled teen Dylan (Colin Ford) and adorable 7-year-old Rosie (Maggie Elizabeth Jones). Distributors at Fox have gift wrapped their product as a family-friendly treat for the holiday season, complete with a poster campaign showing wild animals wrapped in Christmas bows. Following recent examples of why private zoos aren’t perhaps the greatest idea, PETA is not pleased about the film’s release.

Based on the memoir by British author Benjamin Mee, the screenplay by Crowe and Aline Brosh McKenna (The Devil Wears Prada) shifts the story from Devonshire, England, to Southern California for the purposes of American consumption. As Damon’s Benjamin so affirmably states, he wants his children to have “an authentic American experience.” Doubtful such dialogue could be uttered in Devonshire. At any rate, ignoring the guidance from his older accountant brother (Thomas Haden Church), Benjamin leaps into the zoo business on an 18-acre property housing 40-plus species of animals and an eclectic staff of underpaid zookeepers. Fortunately, none of them are Kevin James. The crux of the story follows Benjamin and the zoo’s close-nit personnel, headed by Kelly (Scarlett Johansson), working to get the facility up to standards for a pre-opening inspection, conducted by a snooty examiner (John Michael Higgins) with a dreaded tape measure.

If they don’t pass inspection, the zoo will be closed and the animals’ outlook is grim. A number of obligatory setbacks—including escaped animals, Benjamin’s monetary troubles, and a last-minute rainstorm—provide some contrived but effective obstacles, while the nuanced characters supply the film’s soul. A young love subplot involving Dylan and 12-year-old “country girl” Lily (Elle Fanning) has charm and sparks. Meanwhile, Benjamin cannot let go of his late wife’s memory, which strains his relationship with his son and plunges him into fixing the zoo. One particularly moving stroke considers Benjamin’s unwillingness to put a dying Bengal tiger out of mercy; his experience with his wife has taught him to hold on as long as possible. Kelly convinces him that sometimes not letting go is selfish; as a result, the two develop an inevitable romance.

Without an actor of Damon’s caliber, the film wouldn’t have worked on such a surprising emotional plane. He delivers Benjamin as a complex character writhing with sadness, loss, and anger, yet a powerful desire to provide his children with a good life. He shares intense arguments with Ford, and brings the viewer to the verge of tears during a moment lost in his memories. But there’s also a worthy supporting cast: Johansson fills her role nicely; Fanning gleams just as she did in Super 8; Jones is pure sweetness; and Ford captures teen angst in all its uncertainty and frustration. Also, Crowe’s Almost Famous star Patrick Fugit appears as a zoo staffer with a perpetual capuchin monkey on his shoulder, and the once-promising Angus Macfadyen is the resident expert-slash-drunkard. But Damon is the key here.

Before agreeing to star, Damon wanted Crowe’s assurance that this wouldn’t be “a Disney version” of the story. Crowe convinced the star by rewriting McKenna’s initial script, and then presenting it to Damon along with a CD, on which a carefully selected playlist evoked the mood Crowe sought for his film. Selections from Neil Young, Eddie Vedder, My Morning Jacket, Bob Dylan, and others did the convincing. We Bought a Zoo could have been what Damon feared by falling into a Marley & Me trap and relying too heartily on the cuteness of animals (thankfully, Crowe keeps animal reaction shots to a minimum) to tell a story about accepting loss. Crowe resists that very notion, but in doing so, he also undermines the animals’ themselves. It is possible, after all, to tell a story involving animals without representing them as cutesy, cuddly Disney creatures.

In a way, the story suggests that humans who have trouble communicating with humans choose to work with animals. Cliché plot elements and predictability aside, Crowe searches for a heartrending tale about finding the courage to overcome heartache, and in the end delivers a wholesome, decent, enjoyable film in a commercial package. Although he de-Disneys the story with rich characterizations and very real emotions, something that really bothered this critic, however, was how Crowe’s film doesn’t love animals the way it should, and never acknowledges that intangible way in which animals affect humans. Crowe makes it explicitly clear that he prefers humans over animals with a blatant statement in the end, and never bothers presenting a counterargument. More time attempting to understand Kelly and why she loves the zoo would have corrected this underdeveloped strand. And with this misstep, noted by an avid animal-lover, We Bought a Zoo is a film loaded with far too much humanity, as strange as that sounds.