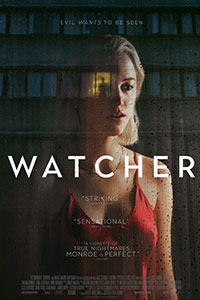 Note: This review was originally written for the 2022 Minneapolis St. Paul International Film Festival. IFC Midnight will release the film theatrically on June 3.

Watcher concocts a paranoid thriller from the disorientation and foreboding that, on the movie’s surface, comes with traveling to a foreign land. On a more universal level, it also explores how some women feel persistent alienation and powerlessness in their everyday lives, even though such anxieties often go discounted by others. Maika Monroe plays Julia, a former actress who moves to Romania with her husband Francis (Karl Glusman), a businessman who spends most days in meetings and most nights schmoozing clients. Although her husband hails from there, Julia doesn’t speak the local language yet, and she has nothing to occupy her time. Somewhere between melancholy and justified concern, she begins to suspect that a dark figure in an apartment across the street has been watching her, even following her. Is this shadowy man “The Spider,” the serial killer whose recent rash of decapitated women has dominated the headlines? Or perhaps the stress of uprooting her life and moving to another country has prompted a delusion? Then again, maybe she’s the voyeur obsessed with her neighbor?

What unfolds is a pastiche, inspired by true originals, that neither pays inspired homage nor subverts its antecedents in particularly novel ways. If Watcher offers too few surprises, director Chloe Okuno nonetheless handles the material confidently, evidenced by her command of form, mood, and tension throughout. Okuno adapted a screenplay by Zack Ford, and she was clearly inspired by the setup of Alfred Hitchcock’s Rear Window (1954), where a voyeur suspects their neighbor of something sinister. She also draws themes of isolation, gaslighting, and justified terror from Roman Polanski’s Repulsion (1965) and Rosemary’s Baby (1968)—especially the latter. To a lesser extent, Sofia Coppola’s Lost in Translation (2003) supplies the sense of solitude that Okuno builds around Julia, who explores a strange new world where the language barrier prevents meaningful connections, if not also basic communication.

Behind Monroe’s tired eyes and inward performance, Julia takes aimless walks on location in Bucharest. Okuno and Danish cinematographer Benjamin Kirk Nielsen focus their cold digital lensing on concrete buildings and drab façades, ignoring some of the more ornate examples in Romania’s diverse architecture to create an unwelcoming space. While wandering these grayed-out surroundings, Julia spies the film’s resident weirdo (Burn Gorman) following her into a movie theater, then into a grocery store. Monroe has played this sort of character before—most notably in It Follows (2014)—but that film interrupted her seemingly dour exterior with bursts of terror. She maintains a quiet uneasiness in Watcher, where her character remains oddly calm despite the potential for panic. Still, Julia doesn’t hesitate to tell Francis about her suspicions that she’s being watched and stalked. He even begrudgingly indulges Julia before finally dismissing her as “stressed” and claiming she has jumped “to the craziest conclusion.” (Where’s Kolchak: The Night Stalker when you need him?)

Okuno’s control of her craft sells Watcher, just as Monroe and Gorman inhabit their roles with compelling results. Okuno ratchets the suspense in a number of well-executed scenes that raise doubts about our protagonist’s suspicions. Not long after Julia’s neighbor, a dancer named Irina (Mădălina Anea), invites her over for a drink—and casually, if not conveniently mentioning she keeps a gun in a coffee table drawer, just in case—the woman disappears. Is Irina the latest victim, or does Julia have an overactive imagination? We never seriously doubt Julia, in part because Glusman’s character doesn’t give the actor much to do besides behaving like an inconsiderate jerk—such as inviting over dinner guests and speaking only in Romanian until Julia leaves the table. Unfortunately, Watcher doesn’t explore their marriage beyond its current state of poor communication and growing resentment. Nevertheless, the climactic scenes when we find out what happened to Irina prove gasp-inducing, though predictable in a satisfying way.

An AFI graduate, Okuno has directed a few short films and “Storm Drain,” the scariest segment from last year’s otherwise disappointing anthology horror sequel V/H/S/94. She has another feature in development, which details the true story of a woman who unknowingly picked a serial killer on The Dating Game. Along with Watcher, Okuno tells stories about women in danger, and the very real threats women face that lead to a pervasive sense of dread when simply walking down the street. But alas, Watcher has a few tricks up its sleeve. While becoming a cinematic translation of the “believe women” slogan, the scenario plays out in formulaic fashion. The experience hits every note it should at the precise moment intended, like a self-playing piano. We hear the melody and tap our toes, but afterward, there’s not much to distinguish it. Picked up at the Sundance Film Festival for distribution by IFC Midnight, this is late-night fare that will keep you rapt for 90 minutes and quickly fade from memory afterward, but leave you eager to see what Okuno does next.