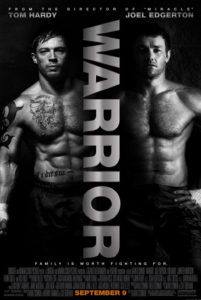 Heavy-handed sports movie clichés are washed over by the two richly defined performances at the center of Warrior, the new sports drama from Gavin O’Connor, the writer-director whose 2004 hockey effort Miracle still inspires admirers of the genre. This film is a fictional story where two brothers, played by Tom Hardy and Joel Edgerton, enter “the Superbowl of MMA tournaments” and end up fighting each other for the championship (O’Connor explored a similar theme in Pride and Glory, another tale of brothers, one cop, one crook). As titles like Raging Bull or last year’s The Fighter have proved, boxing, or in this case MMA fighting, have more potential for human drama than your average baseball or football movie, their stories more concentrated on an individual. Of course, here that’s doubly true. And these stars deliver the goods in abundance, even if audiences must suffer through some obligatory training montages to get it.

In Pittsburgh, recovering alcoholic Paddy Conlon (Nick Nolte) comes home to find his son Tommy (Hardy) waiting on his doorstep. After having disappeared for a number of years when he joined the marines, Tommy now refuses to talk to Paddy about their sordid family history, even though his repentant father has been sober near 1,000 days. Tommy insists his family means nothing to him and wants only that his father train him for an upcoming MMA bout in Atlantic City, known as ‘Sparta’, where the prize is $5 million. Elsewhere in Philadelphia is high school physics teacher Brendan Conlon (Edgerton), who also refuses to speak with his father Paddy but wants to reconnect with his brother Tommy. A former fighter who can’t make ends meet to support his wife (Jennifer Morrison) and two kids, Brendan begins fighting in parking lot matches to earn some extra cash. When his school finds out, he is suspended without pay pending a review; until then, he needs money or his house will foreclose. Brendan reteams with his former “alternative” trainer (Frank Grillo), who makes him listen to Beethoven while sparring, to prepare for the big tournament.

Much like Ultimate Fighting Championship contenders, the script by O’Connor, Anthony Tambakis, and Cliff Dorfman avoids nuance by laying down its punches in obvious, but nonetheless impactful ways. Post-Iraq war hero Tommy trains on the streets, lifting massive tires and roughing it with his craggy-faced father, driven by an intense inner rage that surfaces in his aggressive one-punch-and-you’re-out fighting style. Brendan trains to “Ode to Joy” and approaches his opponents with self-control, biding his time for the perfect takedown. Only in Rocky IV, where Sylvester Stallone’s meat-punching hero was up against the robotic Soviet Dolph Lundgren, was a training montage more obvious. And though they face a number of imposing contenders along the way, Tommy and Brendan end up face-to-face, where all their family troubles come pouring out in a melodramatic brawl, the slow-motion and cheesy score in full gear.

Both men trained vigorously for their fight scenes and had very little experience prior to the shoot, yet their physical performances in the cage look incredibly realistic. Hardy’s intense performance can only be compared to a toned-down version of his role in Bronson—a reactive, emotional brute carrying pounds of unchecked baggage. All but unknown after roles in Star Trek: Nemesis and RocknRolla, since Inception Hardy’s career has been growing. This may very well be the performance that elevates him to an A-lister; and if not, then certainly his role as Bane in next year’s The Dark Knight Rises should do the trick. Edgerton, having drawn attention with The Square and Animal Kingdom, also teeters on becoming a major star. His performance here shows him capable of delivering a satisfying everyman, an ability that often goes unappreciated. But the scene-stealer is Nolte, whose weathered face, grizzly voice, and eyes with untold pain behind them add so much to his performance. Nolte is to Warrior as Christian Bale was to The Fighter, bringing emotional depth to clear-cut boxing movie framework.

O’Connor captures stirring fights where blows are felt, and heard, with a force that sets you back in your seat. Much-deserved cheering will be heard in packed theaters. But there’s one major flaw that puts Warrior in the close-but-not-quite great realm. It’s the sudden ending that fails to wrap up numerous conflicts established earlier: Will Brendan get his job back? Will the sympathetic wreck Paddy ever be forgiven by his sons? Will Tommy’s sordid past land him in trouble, as the story suggests? How will Tommy and Brendan’s relationship progress after their in-ring resolution? We’ll never know since the end credits appear almost immediately after a winner in their match is declared. The complete absence of basic falling action leaves the viewer emotionally disgruntled by a movie that wanted to be much more than just a sports movie, and thus took more than two hours to build its dramatic turns—ones that, amazingly, worked in the face of their corniness. Another ten minutes of screentime to bring a satisfying conclusion would have made this truly one of the best sports movies, period. But its sudden, unsatisfying close brings a patchy end to an otherwise vastly enjoyable viewing.