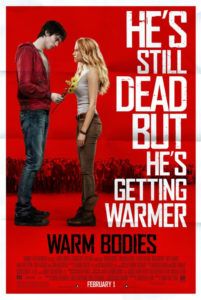 A fact not to be ignored: Warm Bodies was distributed by Summit Entertainment, the same company behind the Twilight franchise. Following the ploy of Stephenie Meyer’s popular vampire-human romance, Summit has exploited similar material with author Isaac Marion’s zombie-human love novel. Both stories draw heavily from Romeo & Juliet, each detailing forbidden romances between star-crossed lovers from two opposing families. In Marion’s zombie post-apocalypse, those “families” are humanity and the hordes of undead. The result is comparable to the little-seen Fido, a delightful satire in which a family discovers their pet zombie has more on his mind than eating flesh; he soon becomes a boy’s (and his mother’s) best friend. But that film was stylized and appropriately exaggerated, whereas the tone in Summit’s latest shifts gracelessly from romantic comedy to post-apocalyptic actioner and all the while expects the audience to stay emotionally involved. Never does the film have as much fun with the material as it should.

About a Boy and X-Men: First Class star Nicholas Hoult plays a wandering corpse known only as “R”. (We’ll assume the initial stands for Romeo.) In his narration, R ruminates and makes hipster observations about his hoodie and the “aw-kward” friendships with other zombies. One day in the herd, R and his fellow flesh-eaters spy human scouts collecting medical supplies outside the confines of their walled fortress. The zombies attack, ripping their meal to shreds, but then R stops in his tracks when he sees Teresa Palmer’s human character Julie. (Add a ‘t’ to the end of Julie and what do you get? Indeed, Shakespeare was tapped.) Just after consuming the brains of Julie’s boyfriend (Dave Franco, brother of James), R is zapped with an inflow of memories transferred from his victim’s yummy gray matter. He instantly falls in love with Julie and wants to protect her. Still, I’m left to wonder, if R hadn’t eaten Julie’s boyfriend’s brains, would he have ever fallen in love? Is love for R no more than some consumed electrical impulses? If that’s the case, it’s hardly authentic, no?

Anyway, when inevitably they do fall in love, something happens inside of R and his zombiism begins to digress; his heart pumps red and his complexion is a bit less pale. Love triumphs over the zombie plague. He’s now able to speak in throaty whispers, more than the mere grunts he could mutter before. Nevertheless, R is barely able to speak throughout the film; every word is laborious, and we’re struck with a look of patient anticipation as he struggles through sentence fragments. And so, R and Julie carry on dull small-talk about vinyl records and keeping safe in zombieland, and she seems to fall deeper into her Stockholm Syndrome ever time he saves her from other zombies. But soon their love inspires those other zombies to change their eating habits; although we’re never shown what their new diet consists of, we’re assured it’s not humans. This new zombieland is not without threats, though. Skinless, flesh-and-bone skeletons called “Bonies” are incapable of love and want to hunt down the recovering zombies like R. The finale involves convincing Julie’s inflexible father (John Malkovich, sleeping through his performance), the last human leader, to accept that zombies have changed for the better, so his forces can join the normal zombies in a battle against the Bonies.

At least in Meyer’s franchise, one can understand why someone (like a teenage girl) might fall for the author’s vampires, as they’re romanticized and tragic creatures capable of infinite sexuality and mystical allure. But there’s nothing sexy about flesh-eating zombies whose very being is tantamount to an unstoppable disease. They lurch and eat brains; they probably don’t smell the best; their bodies are walking rot. Even the most infinitesimal zombie fluid-exchange is bound to infect a human, and since most romantic activities involve some kind of bodily fluid, romance with a zombie seems like an instant metaphor for sexually transmitted disease. I’m reminded of 28 Days Later, when a droplet of blood falls in a character’s eye and within moments he’s a killing machine. Now consider the long, intimate kiss between R and Julie in Warm Bodies and tell me that the very notion doesn’t give you the willies. Has Julie learned nothing about why the zombie plague spread the world over?

Writer-director Jonathan Levine dealt skillfully with the subjects of death and romance in 50/50, but his handling of Warm Bodies lacks a zombie fanatic’s need for established rules. Whether the problem is with Levine’s adaptation or Marion’s source material, only those who’ve read the book can be sure. There’s no consistency behind the zombies themselves; same goes for the central romance. One moment, the zombies seem incapable of anything beyond a sluggish crawl, the next moment they’re sprinting. I was left with all kinds of questions: How do these zombies spread? What the hell is wrong with Julie that she even considers a zombie as a romantic possibility? She has daddy issues of course, but enough to warrant making out with a dead guy? Hoult’s performance has some charm behind his subtle expressions to be sure; however, a zombie would have to have more than just a cute face and a protective sensibility before I lock lips with it. No amount of Purel or disinfectant could convince me it’s safe.

As a long-time zombie fan who’s become bored with the popularization of the subgenre, seeing zombies de-cannibalized in the same way Meyer’s books defanged vampires represents a fundamental misuse of these monsters. Even the characters in Fido knew better than to completely trust zombies, but no one in the film, not even Malkovich’s resident skeptic, takes long to be convinced that zombies are harmless and only Bonies are bad. Maybe I’m opposed to this film because I’m a traditionalist and believe zombies were created in fiction as metaphors for mass societal problems—like racism, American capitalism, military dogmatism, and other such isms. Levine makes a brief hint that his zombies are a metaphor for the distance technology has placed between people nowadays, but it’s hardly what one would call the film’s theme. As I write about Bonies, zombies, and romance, I realize how silly all of this sounds and how completely Levine has failed to bring me into this world or convince me of the love between his Romeo and Juliet. Warm Bodies will appeal to teenagers; those in my screening applauded when the film was over. It will probably be a huge hit.