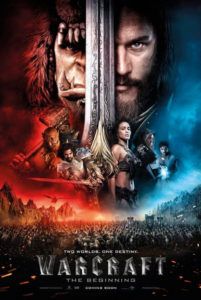 Readers looking for another heated bashing of Duncan Jones’ Warcraft should go elsewhere. The long-awaited screen adaptation of the popular video game franchise has stirred up ugly responses. Critics have used this moment as an opportunity to unleash hell upon the production, writing shallow assessments about a film that deserves to be recognized for its technical and narrative merits. Having no personal experience with the video games and no particular interest in seeing the film, I entered Jones’ world of Warcraft aware of the poor initial reception, but otherwise free of expectations. To my surprise, I was greeted by a character-driven fantasy about universal themes such as family, honor, and survival. And aside from a few dull moments and an overall unoriginal quality to the fantasy, Jones has made Warcraft into a film that kept my attention and left me hungry for more.

For the uninitiated, Warcraft consists of an extensive franchise, first created in 1994 by Blizzard and Interplay Entertainment as a home computer game. In the original game, Warcraft: Orcs & Humans, players could choose to play as either human or orc, and then build villages, command armies, and conquer enemies. After several video game sequels, Blizzard released World of Warcraft and revolutionized online gaming. Their 2004 online game established a virtual fantasy world in which more than 100 million international players built their various character types, sometimes spending real dollars for virtual items such as weapons, skills, and magical powers. What’s more, when you put the controller down, the game’s world keeps living on the internet without you. World of Warcraft’s legacy has long been ingrained into pop-culture, and even urban legend. (Surely you’ve heard stories about players who wear diapers so as not to disrupt gameplay with a pesky bathroom break; or worse, the tale about a player who killed himself after a concerned friend deleted the player’s character.)

When Blizzard Entertainment first began developing a live-action film version of their game in 2006, they followed the basic plot of the original game, in which warring humans fight giant, green-blooded Orcs. However, Charles Leavitt’s initial script was told from the humans’ perspective, a quality Jones was determined to change when he signed to direct in 2013. Jones rewrote Leavitt’s draft and stabilized the conflict, balancing it with sympathy on both sides—as opposed to human heroes against a monstrous, inhuman Other. Elsewhere, Jones paid close attention to how richly conceived motion-capture CGI could bring these creatures to life. The detail is such that I found myself appreciating fine touches in the Orcs’ porous skin, the hairs on their shoulders, or their expressive faces. In no small way, Warcraft breathes life into these characters visually and through its storytelling.

Of course, Warcraft isn’t revolutionary or new. We’ve seen tales of humans fighting an ancient evil or invading monsters before, to such a degree that Warcraft’s basic story is unquestionably derivative. And yet, Jones’ command of the material also remains unquestionable. The screen story tells the origins of the human-orc conflict, beginning with a number of Orc tribes, led by demonic sorcerer Gul’dan (Daniel Wu), searching for a new home. Using evil green magic drained from the life force of slaves, Gul’dan opens a portal into the human realm called Azeroth, planning an invasion. Fortunately, not all Orcs are so megalomaniacal. Tribe leader Durotan (Tony Kebbell) just wants to exist with his wife Draka (Anna Galvin) and their newborn child. Durotan follows Gul’dan’s orders at first but begins to question the sorcerer’s motivations when he sees how Gul’dan’s black magic, called Fel, begins to eat away at Azeroth land, just as it ruined the Orc realm called Draenor.

On the human side, brave army leader Lothar (Travis Fimmel) defends King Llane Wrynn (Dominic Cooper) and Queen Taria (Ruth Negga), his sister. When Lothar receives a warning of the Orc invasion from an apprentice mage, Khadgar (Ben Schnetzer), he seeks the guidance of the Guardian (Ben Foster), an all-powerful wizard tasked with protecting Azeroth. Before long, the humans learn of Gul’dan’s plot to open a portal and allow entry of all Orcs into Azeroth. As ground battles ensue, a thickening plot leads Khadgar to discover that someone on the Azeroth side of the portal must be working with Gul’dan. Meanwhile, fearsome half-breed Garona (Paula Patton) plays a central role after Lothar captures her. She understands both sides and sees the value humans place on their lives, but she also understands the Orcs’ ingrained sense of honor. And while these various plot strains may sound familiar, they play out in unexpected ways, resulting in a few unexpected deaths and room for a sequel.

Whether or not audiences ever get to see that sequel remains another matter. Countless failed sword-and-sorcery yarns have bombed at the box-office. Studios often adapt a known property and rush the first entry; and in their hopes for a long series of lucrative sequels, the filmmakers deliver a slapdash effort. The quality of the filmmaking and ruinous performance end up warranting their own failure. The examples of this are many (Eragon, Inkheart, Jack the Giant Killer, The Last Witch Hunter, The Spiderwick Chronicles, The Seeker: The Dark is Rising, and The Seventh Son come to mind). But Warcraft is not one of these. It’s a solid technical and dramatic effort that, like The Golden Compass before it, doesn’t merit such a harsh critical reception. And, unlike the others mentioned, it deserves a sequel.

Jones has made a solid film, despite the sometimes underwhelming, underdeveloped human cast, some run-of-the-mill setups, and a certain corniness about the character designs themselves (the Orcs’ distracting bottom tusks had me wondering how Orcs are able to talk, kiss, eat, etc.). The director cares about his characters and approaches the material like a craftsman or storyteller, instead of just adopting a bunch of commercial franchise formulas. After all, Jones began with a small, character-driven story on a shoestring budget; his debut Moon (2009) was an impressive science-fictioner boasting a tour de force performance by Sam Rockwell at the center. He followed Moon with Source Code (2011), another thought-provoking story, this one burdened by a frustratingly convoluted finale. Jones’ budgets have increased monumentally in seven years (as is often the case with many young filmmakers). He commands a $160 million price tag and an army of cast and crewmembers on Warcraft, and every cent appears onscreen, from the lifelike mo-cap animation to the immersive backdrops of Azeroth. And yet, Jones doesn’t lose sight of what draws an audience into this or any film: character, drama, and an engaging conflict.

Warcraft has all of those things and manages to impress with its technical and narrative cohesion. Editor Paul Hirsch delivers solid, easy to follow action sequences, and composer Ramin Djawadi sets them to a stirring theme. Best of all, Jones commits to this world and resists trying to make it relatable with annoying modern trends (his characters never say “I got this” or “I know, right?” or anything similar). In the realm of fantasy on film, Warcraft may not challenge Peter Jackson’s The Lord of the Rings trilogy, but it’s certainly more satisfying than the last entry in Jackson’s Hobbit trilogy. In the end, a viewer willing to accept material in which heavily-armored humans battle green-skinned Orcs, glowing-eyed sorcerers teleport from here to there, or an Orc child floating downriver to become Orc-Jesus, is the kind of viewer who will find Warcraft a worthy effort and an underrated entertainment.