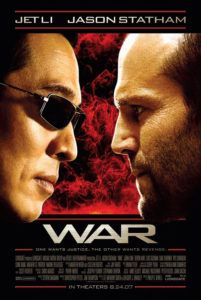 I’m not sure how the producers or writer(s) decided on the title War. Perhaps it suggests the mano-a-mano battle the film’s TV spots and movie posters so enthusiastically advertise. Perhaps it refers to the street war in the film, played out between the Yakuza and Triad gangs. The title suggests something greater than what’s depicted. “War is hell” as they say, but I don’t remember anyone ever saying that war is a below-average cop thriller.

Advertising for War sells audiences the idea of a head-to-head duke-out: Jet Li vs. Jason Statham  (typecast actor vs. typecast actor). I can envision it—some action nut out there excited about the prospect of both The Transporter and The One in a movie together! The film has more than a ninety-minute build-up to their showdown. The peak, an unsatisfactory thirty-second fight sequence, is wholly disappointing. When it was all finished, I wondered, That’s it? And then left the theater feeling empty inside. But I’m getting ahead of myself

The plot centers on FBI agent Jack Crawford (Statham) and his revenge-motivated pursuit of a mysterious Japanese assassin known only as Rogue (no, not the life-force-stealing mutant from X-Men, but Jet Li). Rogue killed Crawford’s partner, not to mention his partner’s wife and child, three years ago, leaving only a titanium bullet shell on the scene. Crawford has been following the assassin’s trail of titanium shells ever since, sacrificing his marriage and relationship with his child in the pursuit.

Rogue, or his bullet shell rather, shows up in San Francisco, at the scene of a Yakuza execution. Crawford examines the floor, finding Rogue’s shell; finally, revenge is in sight. Statham, an actor in primarily tough-guy roles, has been the same since I first saw him in Guy Richie’s Lock, Stock, and Two Smoking Barrels—short hair, whiskery face, gruff voice, and always a sour disposition. Here, his British Clint Eastwood impression backfires, as his crusty voice is barely audible. Not that it matters, really. We’re just waiting for him to sock someone in the jaw.

Crawford is the kind of action movie FBI agent who wears a black leather coat and drives around in a muscle car. I don’t remember Fox Mulder and Dana Scully having a muscle car, although it would have been nice had they needed to run down aliens or Cancer Man. Anyway, on the murder scene, Crawford pulls rank over the SFPD, since they don’t speak Japanese. He calls them “idiots” for churning racial slurs, and after interrogating a Japanese-speaking witness, he refers to the witness’s explanation as “Japanese mumbo-jumbo”.  So, just to be clear, understanding Japanese is vital, caring about Japanese culture is rubbish? Got it.

Jet Li’s performance as Rogue is an odd one. His character maintains the same creepy expression throughout, never showing emotion one way or another. In Unleashed (aka Danny the Dog), Li played a man raised since childhood to kill at the order of his master; we could see basic good-heartedness in Li’s eyes, even sadness when he’s forced to fight against his will—his performance was the best part of that almost-good action flick. Rogue, on the other hand, is an unsympathetic killing machine for 99% of this movie, seemingly unmotivated until the last scene, where we’re expected to suddenly care.

We realize Rogue is playing both sides of the Yakuza vs. Triad battle à la Akira Kurosawa’s great Yojimbo. Except Li has none of Toshiro Mifune’s incomparable talent for subtle nuances in facial and body language. Triad leader Chang (John Lone) wants his family’s few remaining relics, two priceless horse statues, preserved and not sold by Yakuza leader Shiro (Ryo Ishibashi). Shiro wants to finally move from Japan to San Francisco to control his empire from abroad; he sends his daughter Kira (Sin City’s Devon Aoki) first, but she seems too preoccupied with Chef Salads to sufficiently maintain a criminal empire (there’s an awkward scene where Kira threatens two of Shiro’s men because she desperately needs a Chef Salad (?!?)). Each gang’s boss lays down big bucks for Rogue’s loyalty. Meanwhile, he schemes for his own, unexplained motivations.

Li recently announced he was retiring from martial arts movies after last year’s Fearless (Huo Yuan Jia). My understanding was that Li wanted to become a dramatic actor, or at least take roles not dependent on elaborate fight sequences with CGI-enhanced moves. War isn’t exactly a martial arts-based action movie. It does contain several fight scenes, however, not to mention several shots of the pokerfaced Rogue unloading rounds into his victims’ heads. …Which begs the question: Jet Li came out of martial arts retirement for this? For all intents and purposes, the same genre?

I can understand if a legendary director called Li and begged him back from “retirement” for one last masterful script, but War is such garbled trash. The music is loud, women are virtually always bare-breasted, and action sequences are chopped up, mangled to almost incomprehensible confusion. And by the second or third “twist” at the end, we’ve stopped caring altogether.

I like Jason Statham, and Jet Li has done some good work too. Although when the only thing keeping us in the movie is hope that the final clash between these two action movie titans will satisfy, and the payoff is a mere flash of the film, the result disappoints more than a B-grade movie of this kind should. When we can’t even rely on mindless entertainment from a mindless entertainment vehicle, what’s the point?