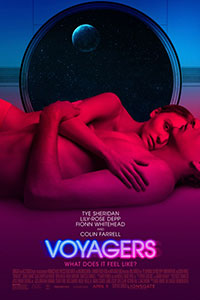 In Voyagers, someone had the bright idea of putting thirty teenagers into space with just one adult to supervise. This implausible recipe for disaster was conceived by writer-director Neil Burger, whose space-bound Lord of the Flies scenario plays out predictably enough. The teens, going where no one has gone before, run amok, just as they did in William Golding’s book. It’s not so much a journey into the unknown but well-trodden ground; it’s the YA version of recent lost in space arthouse gems like High Life (2019) or Aniara (2018). Burger is no stranger to sci-fi-infused teen fare, having directed the first in the defunct Divergent series. But his treatment reduces the material’s commentary to a surface-level exploration of otherwise weighty themes. And after all its pontificating about humanity’s emotional nature, violent impulses, and hunger for power, its incongruously optimistic ending feels out of place.

Over forty years from now, humanity faces extinction from global warming and depleted resources. Scientists come up with an awful last-ditch plan: raise test-tube children, genetically engineered from the best and brightest, and send them on an eighty-year journey toward a planet to colonize. The children are raised in a lab under the supervision of Richard (Colin Farrell), who tags along when the Humanitas spaceship launches to ensure the pre-adolescent crew adapts to their condition and mission ideals. But they’re the first of a planned three-generation trek, so they will probably die before seeing their destination. The trouble starts in their late teen years, when two boys, Christopher (Tye Sheridan) and Zac (Fionn Whitehead), discover their daily doses of “the blue”—the not-so-clever name for their blue sensory inhibitor drink—dulls their senses. Once they realize they’re being drugged to maintain order, the teens stop taking their medicine and experience their unrepressed selves for the first time.

Burger’s script is such that there’s almost no gradual buildup to disaster. Zac’s aggression and rapey vibes manifest in his roughhousing with Christopher and creepy gaze at chief medical officer Sela (Lily-Rose Depp). Soon enough, Richard dies and leaves the teens to self-implode. Although the rational Christopher is voted the new leader, the teens explore sex, play-fighting, and excessive feasting from their regulated stores. Zac starts to complain about their regimented workloads and schedules. “We’re just going to die in the end, so what difference does it make if we do what we want?” Then he stokes paranoia about an alien onboard, suggesting the alien has inhabited one or more of the crew—and in true McCarthyist form, anyone who crosses him gets accused. Following Goldman’s book, Burger’s characters break into two factions: the rational, to which Christopher and Sela belong, and the violent majority who follow Zac’s every word like mindless worker bees. It all comes to an obvious head, followed by a head-scratching coda. 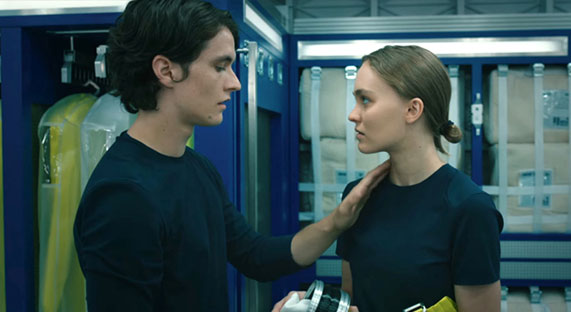 Voyagers is a handsome production, capably shot by cinematographer Enrique Chediak (28 Weeks Later, 2007) and coherently assembled by editor Naomi Geraghty. Design-wise, it’s somewhere between Star Trek and The Martian (2015), offering slick touch technology that doesn’t seem like it came out of humanity’s last days but rather, quite incongruously, from a utopia. Burger also uses CGI in ways similar to his 2011 film, Limitless, in which Bradley Cooper’s character experienced the full potential of his brain through a delirious continual zoom effect. Here, the teens go through a sensory awareness breakthrough when they all stop taking “the blue.” Burger visualizes this with their perpetual running through the ship’s corridors, sometimes using a time-lapse effect. Elsewhere, he uses banal hormone montages of flowers blooming, eyes dilating, bombs exploding, animals attacking, and people fighting to capture how the teens’ brains drown in an influx of neurochemical stimuli.

Although many of Burger’s visual techniques look neat enough, his screenplay proves unconvincing and overstated. Rather than allow the teens to play out their mutiny, Burger has them stop to utter dialogue that puts too fine a point on the film’s themes. Sheridan, a talented actor capable of commercial fare (Ready Player One, 2018) and more out-there performances (Entertainment, 2015), is saddled with dialogue like, “We have our rules. They keep us in line. But deep down, maybe this is our true nature.” Meanwhile, Whitehead’s sharp features and unhinged appearance, combined with his petulant-child complaints that their situation “isn’t fair,” are successful in creating a detestable character. But there’s no nuance to be found in the performances. Much of the young cast members (including an almost wordless performance by Viveik Kalra from 2019’s Blinded by the Light) appear only as dimensionless participants. One yearns for the inwardness of Kristen Stewart, Robert Pattinson, or Shailene Woodley in such material.

For those who didn’t read Goldman’s book as part of their middle school syllabi, Voyagers hits the basic story beats—yet somehow Burger avoids giving onscreen credit to the text. Its lofty and timeless themes about humanity’s short-sightedness, capacity for violence, and need to exploit available resources all resonate. The problem is how Voyagers makes them dopily unmistakable by telegraphing them into an inelegant message, and then contradicts them as well. The inadequate final scenes suggest that these teens somehow overcome thousands of years of humanity’s worst genetically predisposed behaviors. How did they do it? Their secret remains conveniently nestled off-screen, making it all the more implausible after having just watched 108 minutes of people at their worst. It smacks of something executives demanded after seeing negative feedback from test audiences who didn’t enjoy being confronted with the unsavory truth about human nature. The solution betrays not only Goldman’s book but Burger’s ham-fisted reduction of it.