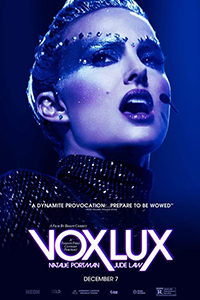 Vox Lux, with its illuminating title and allusive subtitle, “A Twenty-First Century Portrait,” finds writer-director Brady Corbet critiquing the dynamics of the entertainment industry as a symbol for our culture at large. Its subject, a pop diva named Celeste, emerges as a teen icon out of a tragedy, and she finds she’s able to sustain her celebrity because society hungers for a constant stream of mindless diversions, the grimmer the better. With his targets ranging from the vacuous pop music scene to the public’s obsessive attempts to buy the pain of others, Corbet doesn’t always deliver a cohesive argument against the commodification of tragedy. His methods are equally varied, from intimate moments with his characters to the film’s demarcated chapters, all of which end in an almost Brechtian concert performance. However superbly shot, acted, and well-intentioned its message, Vox Lux remains somewhat puzzling, if admirable for its commitment to unconventionality.

After she survives the opening sequence’s horrific school shooting in 2000, 14-year-old Celeste (Raffey Cassidy, from The Killing of a Sacred Deer) becomes a sensation with a hopeful pop tune, performed at her Staten Island hometown’s community mourning assembly. The song becomes a national hit, after 9/11 in particular, and her parents strike a deal to develop her evident talent and that of her songwriting older sister (Stacy Martin) by placing her with a manager (Jude Law), who helps them develop a contract with an executive (Jennifer Ehle) from a record label. “Her loss of innocence mirrored that of the nation,” observes Willem Dafoe’s omniscient narrator about Celeste. His voiceover makes dry, informative observations about Reaganomics and the Swedish classical music scene throughout, guiding the viewer through the young Celeste’s emergence as a star. This period occupies most of the film’s runtime in the opening act, called “Genesis”—fittingly, since the adult version of Celeste, played by Natalie Portman, later compares herself to the people’s messiah.

The second act, called “Regenesis,” opens 17 years later, following scandals and personal drama that have kept the public interested. Celeste now has a teenage daughter (Cassidy again), who she tries to protect while blaming the tabloids and fans for prying into her private life. Celeste might be a sympathetic victim of the sometimes aggressive attention paid to celebrities, except for how much the pop-icon seems to enjoy hating the constant presence of cameras and pressure from the fans in her life. Moreover, another gun-related tragedy with a vague connection to her has the media questioning how her story has shaped those who’ve bothered to listen. In one of the songs she performs in the finale’s huge arena concert for 30,000 screaming fans—which Corbet stages like a glittery, video-screened pyrotechnics show—she laments, “I’m a private girl in a public world.” The second part is true, anyway.

It’s perhaps revealing to note that while Vox Lux hasn’t performed well (it made less than a million dollars in domestic box-office receipts on its opening weekend), the buzz around the film involves the soundtrack. Scott Walker, himself a 1960s pop-star-turned-experimental-musician, provided the moody non-diegetic score, not that the mass viewership is interested. Rather, Sia, an Australian superstar, composed the empty, electropop songs that Portman performs onscreen—interchangeable with countless others of this genre (Lady Gaga, Katy Perry, Britney Spears, Madonna, etc.). It’s ironic that people have flocked to the faux songs meant to parody actual pop music, missing Corbet’s commentary entirely (think about the effect of The LEGO Movie’s hit “Everything is Awesome”). The phenomenon brings to mind Celeste’s line about why she feels compelled to make pop music: “I don’t want people to think too much. I just want them to feel good.”

Corbet’s sophomore effort, after 2015’s The Childhood of a Leader, demonstrates that he has an understanding of how to make a film look sharp and feel important. The cold, removed cinematography by Lol Crawley works perfectly to reflect the artifice of otherwise profound interpersonal moments, while the most grandiose displays of music videos, terrorism, concert performance, and emotional outbursts have an unwavering immediacy. There’s never a dull moment as Corbet tries a lot of various approaches, throwing everything at the screen to see what sticks. Some of it does, such as the opening school shooting or the scenes with young Celeste—Cassidy is excellent in both of her roles. Elsewhere, the final act’s concert finish is somewhat underwhelming, as though the production could only afford a cheap knock-off of an actual pop concert. Then again, maybe that’s the point. Or maybe it’s an unintended consequence, similar to how the last song of this year’s A Star is Born felt phony and hollow, though some read it as genuinely moving.

As for Portman, who executive produced Vox Lux alongside Law, one must assume she could relate to Celeste. After all, from her early teens into adulthood, Portman was cast in roles that sold an underage fantasy, epitomized by her presence in material like Beautiful Girls (1996). Having to maneuver through the sexualization and performative expectations set upon her as a young female talent, there’s undoubtedly a lot of Portman in Celeste. At times, that comes out in searing, pseudo-comic outbursts that play like a caricature; at other times, it’s a raw and sad performance. Portman is talented enough, especially in recent years with her breakthroughs in Jackie (2016) and this year’s Annihilation, that she’s able to make Celeste a character at once absurd and worthy of our empathy. Corbet’s actual intentions, however, remain more opaque, as the varying interpretations and readings of the film show. Then again, had Vox Lux been transparent in its messaging, it would have been far less compelling.