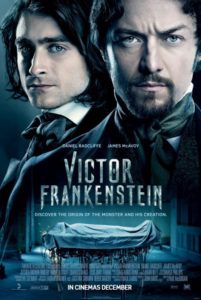 20th Century Fox’s Victor Frankenstein aims to revamp Mary Shelley’s classic horror novel on the screen in the same way Guy Ritchie’s Sherlock Holmes films rethought Sir Arthur Conan Doyle’s character as a wise-ass unopposed to fisticuffs. Director Paul McGuigan (Push) and scripter Max Landis (Chronicle) assemble a stew with stereotyped ideas from the book and a few fresh ingredients tossed in, stirring up chaotic and unnecessary reimagining. Announced in 2011, the long-delayed $40 million production features some impressively detailed setpieces by set decorator Michael Standish and production designer Eve Stewart. We also get two affable leading men in Daniel Radcliffe and James McAvoy. But the uneven pitch throughout proves offbeat and aggravating. It’s as if the filmmakers couldn’t decide whether to produce a classical retelling or a campy fun-fest, so then decided it might be clever to create a monstrous assemblage of both. Their plan didn’t work.

Tonally inconsistent, Victor Frankenstein doctors together outlandish action sequences, gothic drama, weirdly enthusiastic humor, and gristly physical horror in an ungainly patchwork. Landis’ post-modern, meta-humored writing style, evidenced on this year’s American Ultra, offers strange, period-inappropriate mannerisms that never find a happy balance. The film opens with its intermittent voiceover by Radcliffe. He plays a hunchbacked circus performer with a penchant for studying medicine on the side. The hunchback draws the attention of Dr. Frankenstein (McAvoy, dialing it up to 11) by demonstrating a unique ability they both share—to see humans and animals as if they’re subjects sketched in a medical textbook. This visual gimmick equates to Sherlock’s ability in Ritchie’s aforementioned films to seemingly slow down time and plan out his attack prior to a physical encounter.

Before long, Frankenstein has rescued his nameless new friend from the circus, quickly removed his signature hunch (in a gross display of practical FX), and renamed him Igor, after a former roommate. Together, they embark on Frankenstein’s mad plan to create life from death, first on an animal assembled from chimp parts stolen from the local zoo—it results in abomination, but Frankenstein isn’t deterred. This opening segment proceeds so quickly that there’s hardly time to get to know these characters. Not that it matters; both are one-dimensional constructions at best. Igor is the fish-out-of-water and audience entry point character, ever wide-eyed and eventually moralistic. Frankenstein is propelled by a shrug-worthy, wounded protagonist backstory that attempts to lend emotional heft to his reasons for reanimating dead flesh. Meanwhile, an obsessed Scotland Yard detective (Andrew Scott) investigates Frankenstein and Igor, believing theirs is the work of Satan. On the periphery, trapeze artist Lorelei (Jessica Brown Findlay) becomes Igor’s love interest and takes up space in the film.

As Victor Frankenstein builds to a predictable finale inside a castle—complete with lightning, wires, and an upset, block-headed monster with bolts protruding from his neck—the film’s structural familiarity proves its greatest weakness. Landis tries to liven up the material by making subtle references to Mel Brook’s Young Frankenstein (“Frankensteen”) and even the San Diego Comic Con’s Hall H, but these asides aren’t enough to keep even the geekiest viewers engaged. Landis’ writing includes no end of perfunctory characters and scenes, just as his earlier genre titles Chronicle and American Ultra did. But none of it feels novel, no matter how much the actors overcompensate with their performances. McAvoy’s showy turn and grandstanding momentarily distracts here and there, but the film can’t decide whether it wants to paint Frankenstein as a human monster or an incorrigible heroic figure. Radcliffe’s everyman Igor doesn’t work; the filmmaker should have gone full hunchback.

Early on, Igor tells us via voiceover, “You know this story.” Indeed, a few details and arbitrary backstories aside, Victor Frankenstein proves to be the same old story, if allowing itself room for a sequel (that will almost assuredly never come). In the end, Landis’ characters learn the same lessons about hubris that Shelley’s did. The adaptation doesn’t reinvigorate the material or make this version somehow essential viewing over James Whale’s 1931 classic Frankenstein, or even Kenneth Branagh’s overcooked 1994 version. In fact, the tone borders on Universal’s silly Van Helsing from 2004, where would-be degrees of fun and scares result in an absurd, laughably bad movie. The production’s occasionally impressive craftwork aside, add Victor Frankenstein to the seemingly endless list of failed attempts to reclaim the iconography of Universal Studios’ classic monster movies.