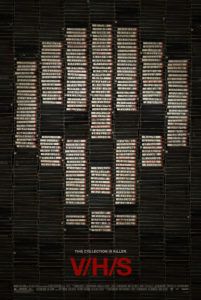 Assembled in the tradition of horror anthologies like Creepshow and Trick ‘r Treat, the collection of scary stories in V/H/S affords six directors the chance to explore the “found footage” subgenre, and they, in turn, employ no end of shaky-cam antics and jerky movements with all the video cassette grain and pixilated digital distortions suggested by the title. Six short stories filmed in a home movie POV-style adopt a varying range of aesthetics in their respective 20-minute segments, each made for cheap with amateur actors and minimal production values, and each restricted to the narrative limitations of the subgenre kept popular by the Paranormal Activity movies. And while the movie makes good use of its confines with a number of effective scares, gory kills, and some creepy twists, at two hours, it runs on far too long and never comes together as a whole.

The thin connective tissue between these six stories belongs to Adam Wingard’s “Tape 56”, wherein a foursome of hooligans (Kentucker Audley, Lane Hughes, Calvin Reeder, and Wingard) entertain themselves by playing sick pranks, vandalizing empty buildings, secretly recording sexual intercourse, and then putting their videos on the internet. They’re hired to break into an old guy’s house and steal a single VHS tape, described only as “You’ll know it when you see it.” What they find, however, is the old man seemingly dead in a recliner, sitting before several buzzing TV monitors and a pile of videotapes. As the others search the house for this special VHS, one lout sits down to check the old man’s tapes. As the movie progresses, each member of their gang watches a new tape and disappears afterward.

After two ho-hum vids in a row, the show ends on a high note with the two best. Joe Swanberg changes the POV style for a series of webcam chats in “The Sick Thing that Happened to Emily When She Was Younger”. Here, long-distance lovers Emily (Helen Rogers) and med-student James (Daniel Kaufmann) discuss a lump in her arm and possible ghosts in her apartment, leading to some freaky if unexplained turns. Then, the trio directing as Radio Silence helm “10/31/98”, another hidden cam tale tracking a group of friends on a Halloween night outing. Lost on their way to a costume bash, they enter what they believe to be a haunted funhouse, but it’s hardly the staged show they were expecting. After this, we return for the conclusion of “Tape 56,” a low note that fails to bring any purpose to what we’ve just endured.

With a varying range of quality and execution, this horror anthology offers some shorts that are better than others, with a couple of obvious standouts and a couple of apparent missteps. Swanberg’s entry is the best of the lot, if only because it doesn’t resort to that tired “found footage” staple of the POV camera falling to the floor when the subject suddenly dies. It’s also one of the only shorts not reliant on a gang of obnoxious youngsters acting like idiots, as the majority are filled with these annoying, disposable character types. The blunder entries might have been overlooked if “Tape 56” had brought some connectivity or meaning to V/H/S overall, but instead, we’re left questioning why the old man had so many morbid tapes in his empty, dark house. Our questions go unanswered, and this procession of sudden endings concludes with just as much haste, leaving us feeling unsatisfied and empty. For a certain section of horror aficionados, the prevalence of cheap, momentary thrills will justify this handheld camera experience. But for all its tension and shock value, the experience is uneven.