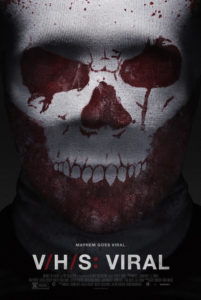 Young, creative, independent filmmakers like Ti West (The Sacrament), Joe Swanberg (Silver Bullets), and Adam Wingard (You’re Next) have contributed to Bloody Disgusting and Magnolia Pictures’ co-productions V/H/S (2012) and its sequel V/H/S 2 (2013). Both horror anthologies were shaped around the concept of watching “found footage” snuff material on VHS tapes, and despite the ups and downs of their various episodes in the anthology format, their filmmakers delivered engaging and certainly memorable contributions to the subgenre. Less successful is the latest iteration, V/H/S: Viral, which all but abandons the loose conceptual logic holding the previous entries together in favor of an almost abstract, notably digital outcome. The result is an unwatchable mess.

While the framing device of the earlier films each involved someone stumbling onto a stack of VHS tapes and watching their disturbing content, the structure for V/H/S: Viral is less coherent. Marcel Sarmiento (Deadgirl) directs the connective tissue “Vicious Circles,” about a teenager obsessed with recording his life on his camera phone and becoming the next internet sensation. Interspersed between patchy, intimate footage of his girlfriend, the main teen begins chasing after a rogue ice cream truck barreling down Los Angeles highways and followed by a squad of police cars. Sarmiento latches onto several teens trailing along with their shaky, handheld cameras, while signals from the truck seemingly cause bystanders to enter a trancelike state and bleed from the nose. It’s all so shoddily assembled and disorganized that one can hardly follow how it’s meant to represent any form of structure. And since V/H/S: Viral keeps revisiting this story throughout, it makes the overall experience downright confusing.

The first of the stories is called “Dante the Great,” and rather than a “found footage” film, it’s a faux documentary blended with spectator footage, security cameras, and police interrogation video. Already this doesn’t feel like another V/H/S sequel, in a bad way, because of the variety of footage sources—it’s more like Redacted. Writer-director Greg Bishop (Dance of the Dead) tosses out the entire formal concept and tells the story of the titular magician (Justin Welborn), an extremely popular stage illusionist with an extreme ego to match. After receiving a cloak once owned by Houdini, Dante finds he can perform magic for real, but the demon living in his cloak demands regular human sacrifices to keep the magic flowing. Who better than a magician’s assistant for demonic cloak chow? Things degrade into a silly duel of magical powers by way of Harry Potter when Dante’s assistant Scarlett (Emmy Argo) fights back.

Timecrimes director Nacho Vigalondo handles the second and best segment, familiar territory for him, called “Parallel Monsters,” and delves into the theory of alternate universes. Inventor Alfonso (Gustavo Salmeron) builds a doorway to another dimension, where he agrees to change places with an alternate version of himself for a brief 15-minute exploration. And though the alternate world appears to be identical, things get weird once he sees vaguely Satanistic imagery, witnesses human faces glowing like the robots in The World’s End, and experiences the monstrous version of this universe’s sexual reproduction. For the final video, Resolution co-directors Justin Benson and Aaron Moorhead deliver “Bonestorm,” about a gang of obnoxious skateboarders with head-mounted cameras who voyage to Tijuana for prime skating grounds. They quickly realize they’ve interrupted some kind of daylight occult séance involving undead skeletons, and the outcome is bloody chaos.

Besides feeling far removed from the anthologies before it, the majority of segments in V/H/S: Viral play as if assembled by teenagers, scattershot and confused, the video itself annoyingly slapdash—as if 90 minutes of YouTube videos had been lined up one after another. But internet video culture is already deplorable enough without making movies in that style. By distancing itself from the original, nostalgic premise of the V/H/S series, something is lost in translation. Perhaps it’s because anyone can grab a phone and press record nowadays, whereas, to put something on tape, and then label and catalog it, is a very deliberate act that itself is rather creepy. Without that undercurrent pervading beneath the proceedings, the V/H/S series might as well go the way of the dodo and, like the home videotape format, disappear as a distant memory.