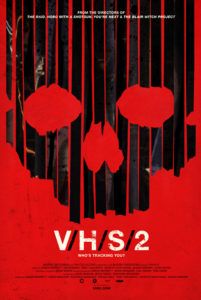 Less than a year after 2012’s independent horror anthology V/H/S found a cult audience at midnight screenings and video-on-demand markets, the producers unveil a superior sequel aimed at the same crowds. V/H/S 2 (also called S-VHS) contains just four shorts, one less than the original, each encased by a fifth story serving as loose connective tissue. The offerings in this compilation play as if we’ve just discovered a horrific series of snuff films of ranging quality and technique, each written and directed by its own filmmakers and presented in grainy “found footage” style. Some appear to be shot with professional video equipment, while others use traditional home video cameras and mounts to create the illusion of realism. But unlike the original, almost every short here proves involving, scary, and occasionally inventive, whereas only small fractions of the original were worth the viewer’s time.

Mirroring the original, the first short “Tape 49″ acts as a lead-in to the other segments. Larry (Lawrence Michael Levine) and Ayesha (Kelsey Abbot) are private investigators searching for a missing college student, all the while recording their findings for their client, the boy’s mother. They enter the ramshackle house where he’s been hiding and come upon a familiar pile of VHS tapes and old television monitors blaring static screens and white noise in the dark. As Larry searches the house for the missing boy, Ayesha watches the tapes for clues. As V/H/S 2 proceeds, we realize writer-director Simon Barrett has tapped into David Cronenberg’s Videodrome for inspiration. Soon we observe video logs by the missing student, who remarks how his tape collection has had a strange effect on him. Sadly, “Tape 49” remains the least interesting of the bunch and the overall film suffers for it.

This is not the case with “Phase I Clinical Trials”, written and directed by Adam Wingard, who helmed the original’s “Tape 56” and the upcoming shocker You’re Next. If you remember John Carpenter’s 1993 horror anthology Body Bags, and in it a segment called “Eye” starring Mark Hamill, you know the basic scenario here too. Wingard himself plays Herman, a car accident victim who regains his sight with a newly implanted cybernetic replacement. In this clever exercise in POV filmmaking, Herman quickly learns his new eye allows him to see ghosts of the going-to-kill-you variety. Next comes the film’s highlight: “A Ride in the Park”, which was shot all but entirely with a GoPro camera mounted on a bike helmet. The Blair Witch Project co-director Eduardo Sánchez and that film’s producer Gregg Hale teamed for this intensely gory, but also grotesquely hilarious foray into zombie horror with the amusing notion of a “zombie cam”.

Any levity that “A Ride in the Park” might’ve brought—with its silly sounds of a zombie who recognizes a good meal when he sees one—are completely obliterated by “Safe Haven”, a disturbing, tense short film, and easily V/H/S 2’s scariest. Indonesia-based Welshman Gareth Evans (The Raid: Redemption) and Timo Tjahjanto wrote and directed this ambitious, multi-cameraed short which could easily make a longer feature. Their segment follows a documentary film crew as they investigate an Indonesian cult headed by a resident “Father”, who’s suspected of “purifying” his young female students as part of their path to immortality. Increasingly shocking and bloody, “Safe Haven” veers from Rosemary’s Baby territory into something far more disturbing. Finally, the self-explanatory title of “Slumber Party Alien Abduction” should suggest what Hobo with a Shotgun director Jason Eisener was going for. In it, a group of preteens wage a prank war on their older teen siblings, until aliens arrive and ruin all their fun. A dog-mounted camera seems like a cute idea, until it isn’t.

With three out of four shorts rising above the rest, “Slumber Party Alien Abduction” is the obvious black sheep of the bunch and seems underwhelming when compared to the ingenuity and jump-in-your-seat scares found in the others. Nevertheless, the overarching “Tape 49” feels almost pointless and fails to give a purpose to the film as a whole, an unresolved problem carrying over from the original. Perhaps for the inevitable third go-round, the filmmakers could get together and discuss their plans beforehand and attempt to give each short a puzzle-piece quality that, in the end, would give meaning to the bigger picture. At least the filmmakers have found new and dare I say artistic ways of using their limited runtime and resources to scare us, no matter how unsatisfying the complete package may be. At times a fascinating display of indie horror creativity, at other times a merely serviceable display of “found footage” tropes, V/H/S 2 is admirable but uneven, as is often the case with such anthologies.