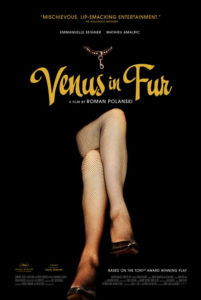 On a vacant Parisian boulevard in the rain, a force of nature finds her way to a modest, unnamed playhouse, and enters the auditorium. Inside, she finds playwright Tomas Novachek, who, directing his first production, has auditioned unskilled actresses all day for his adaptation of Leopold von Sacher-Masoch’s Venus in Furs, the salacious Austrian novella from 1870. In both the text and Tomas’ play, bookish sophisticate Severin Kushemski forms a relationship with Vanda von Dunajev, a forthright aristocrat, and becomes an obedient slave to her maîtresse (and therein founds the term “masochist”). Curiously, the force of nature whose perspective we occupy in the opening sequence also goes by the name Vanda. She’s strapped with a dog collar, cakes on trashy makeup, wears black leathery lingerie and says “like” too much. At first glance, she seems to be another one of those “stupid fucking actresses” Tomas complains about on his cell phone when we first see him. And yet, despite all appearances, this Vanda soon embodies the role in so much that she might just be a goddess in disguise, having arrived on Tomas’ set to exact carnal revenge for his embrace of misogynistic art crimes.

Roman Polanski’s Venus in Fur (La Vénus à la fourrure), an adaptation of David Ives’ 2010 Broadway play, demands that an audience ponder its many intellectualized, psychosexual, intertextual, and subtextual meanings. At any moment, the film works on multiple levels, such as, but not limited to, a book-within-a-play or play-within-a-film. At the same time, its literate, self-aware characters work out concurrent analyses of their ever-shifting gender roles, from the flighty auditioning actress who yields to her domineering director’s every command, to the subservient male and his female master. All the while, the film’s off-screen parallels—that Polanski has, to some degree, put himself in the film—never escape the viewer. Indeed, the film, set entirely in an empty theater, is pure Polanski in that it contains themes of claustrophobia, paranoia, power plays, and tables turned throughout—qualities applicable to nearly all films to his name. However, Venus in Fur has the most in common with Carnage (2011) and Death and the Maiden (1994), his other expertly shot and just as confined play-to-film chamber dramas.

On a theater stage littered with the last production’s remnants, including towering phallic cacti from a musical version of John Ford’s Stagecoach, Tomas (Mathieu Amalric) grants the late arrival of Vanda (Emmanuelle Seigner) an audition, albeit reluctantly. All at once, she drapes herself in a period-appropriate dress and seems to know the piece back-and-forth; either she’s a quick study, as she claims, or she’s more deliberate and practiced than she wants him to know—which begs the question: Why would she hide it? Fascinated by her expert performance, Tomas agrees to read lines with her and plays Kushemski behind a nineteenth-century smoking jacket Vanda just-so-happened to have with her. From here, the two alternate roles between Tomas and Kushemski, between the aspiring actress Vanda and the dominatrix, between positions of control and subjugation, and this cat-and-mouse game persists with incredible wit and implication. Constantly bordering on lurid kink, submission, and domination, they make scheming passes at one another, though with increasing sexual humiliation for Tomas, as it gradually becomes evident why he identifies with the material.

And how can we ignore Polanski’s role in this two-person show? Seigner married and had two children with the director after appearing in his 1988 thriller Frantic, and here she plays a role pregnant with implication opposite Amalric. These two actors appeared together once before in 2007 for The Diving Bell and the Butterfly, where Amalric played a conscious man locked inside his unmoving body and Seigner his wife, and gave rich performances each. But the loaded material of Venus in Fur presents a new challenge. Each actor plays multiple roles at once: their outward character, their onstage role during the audition process, and the role hidden underneath their pretenses. Amalric resembles a younger Polanski, with mopish hair and mousy features, and plays a self-absorbed writer whose sexual perversities result in a kind of karmic retribution upon him. Seigner, who also appeared in Polanski’s disappointing The Ninth Gate (1999), is wildly entertaining in her most confident performance to date, jumping from the reality of her character to its many illusions in a split second with an intangible magnetism. As a viewer, we cannot help but speculate about the nature of power between the real-life actress and director.

Given how Seigner and Polanski explored a sordid, sadomasochistic love story together in Bitter Moon (1992), the material in Venus in Fur feels like a more elemental, comical take on the dark sexual relationships often explored in Polanski’s works. By extension, Polanski has correlated himself not only with Tomas but Kushemski, opening the film up to any number of autobiographical interpretations for the controversial filmmaker. But what does it all mean? Vanda suggests to her director that his play’s meaning is “ambivalent”. He corrects her, “Ambiguous.” Which is it, ambivalent or ambiguous? Arguments could be made that Polanski has made a film about reassigning gender roles or sexual desire as a social power; or perhaps, as the actress suggests, it’s just “S&M porn” rooted in degradation and humiliation as a fetish. Certainly, sexual power, sadomasochism, and sexism are all interrelating in unique ways throughout the film. Then again, perhaps the film is about the liberty of art and the freedom of expression without the necessity of meaning.

But then, early on, Tomas blasts Vanda for trying to assign meaning to his play, deriding critics who define art with grand sociological and political labels that limit its reach. Unquestionably, Venus in Fur has an ominous, elusive quality until the final, shocking moments that are both hilariously outlandish and, in another way, almost frightening. Composer Alexandre Desplat, who also wrote the subtle music for Carnage, booms in the opening but maintains an appropriately teasing menace throughout the interplay. Aurally, Polanski also injects sound FX onto pantomimed actions; as a result, we hear a teacup rattle on its plate or a pen scratching paper during enacted scenes, immersing us in the situation further. Shot in a brief 27 days with a masterful sense of craft, Venus in Fur is another dazzling accomplishment by Polanski, filled with fluid camerawork by cinematographer Pawel Edelman and endlessly provocative notions embedded into the proceedings. Charming, thought-provoking, and bound to incite conversation, Venus in Fur‘s greatest quality is that, through all of its devilish joys, Seigner and Amalric infuse the film with an unexpected depth of feeling. What it means, well, you decide.