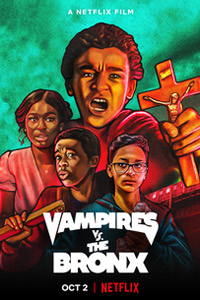 A horror-comedy that feels inspired by a half-dozen other movies that came before, Vampires vs. the Bronx is a serviceable treat whose familiar genre trappings will please late-night viewers. The setup recalls Fright Night (1985), since it follows a teenager who suspects that his new neighbors are vampires. But it also brings to mind Attack the Block (2011), given that the movie reframes a familiar genre scenario in a multicultural setting, far removed from the predominant white suburbia where its predecessors took place. By the time our young heroes throw balloons filled with holy water at the vamps, The Lost Boys (1987) becomes an apparent influence as well. Sure enough, the Netflix release will probably seem like run-of-the-mill stuff to viewers experienced in the genre. Still, its personality remains individual enough to distract from its resemblance to earlier (and admittedly better) movies with similar plotting. What’s more, a refreshing theme that reveals the racially charged motives of gentrification promises to give the movie an obvious if cheer-worthy commentary.

The story centers on Miguel (Jaden Michael), who earns the nickname “‘Lil Mayor” because he jealously protects his neighborhood in the Bronx. Many local storefronts have closed to make way for yuppie businesses, from coffee shops to butter stores, introducing an unsavory element of “white people with canvas bags.” But Miguel plans to throw a fundraising block party to save his friend Tony’s (The Kid Mero) bodega from succumbing to recent rent hikes. At the same time, a spree of missing persons has raised alarm bells, and Miguel finally realizes what he’s up against when he witnesses a vamp draining a local gang member. No adult will believe his stories about the fanged baddies who are buying up real estate and feeding on people “where no one cares when people disappear.” So he enlists his two friends, Bobby (Gerald W. Jones III) and Luis (Gregory Diaz IV), to fight back. After taking notes from a DVD of Blade, the trio sets out to investigate Murnau Properties (a nod to Nosferatu director F.W. Murnau)—whose logo of Vlad The Impaler, the inspiration for Dracula, does not bode well.

Horror movies have given vampires a wide range of metaphorical significance. Whether they represent symbols of forbidden desire (Near Dark, 1987), the spread of disease (The Last Man on Earth, 1964), or the suppression of women (Byzantium, 2012), filmmakers use them to embody any number of social anxieties. In Vampires vs. the Bronx, director Oz Rodriguez and his co-writer Blaise Hemingway use bloodsuckers to represent the white gentrification of culturally diverse neighborhoods. Rodriguez, mostly known for directing digital shorts on Saturday Night Live, gives the proceedings a surprisingly weighty commentary about gentrification as a form of white supremacy. As corporations buy people out of their homes and storefronts, using capitalism to exploit people who want to escape violence compelled by poverty, the process becomes an act of cultural assimilation and destruction. The message becomes unmistakable when one of the pale vamps grabs a person of color and threatens, “We are going to wipe you out like the vermin you are!”

But the metaphor about gentrification never becomes oppressive or distractingly preachy; rather, it imbues Vampires vs. the Bronx with enough substance to make the lighter, teen-friendly antics more palatable. Rodriguez delivers a boilerplate experience, with rambunctious kids riding around on bikes, following a schematic that leads them into a dark basement filled with coffins. The vampires, who look like rejects from the Underworld franchise, wear black garb, and each has bleach-blonde hair and blue eyes—except for the resident familiar (Shea Whigham, under a tall, Elvis-like coif). When they’re angry, they adopt prominent brows, yellow eyes, and fangs, and they’re destroyed with some mild PG-13 gore. More interesting are Miguel and his fellow humans, characterized by their Latinx and African American households already teeming with crucifixes and garlic adobo seasoning, which will be weaponized by our young vampire hunters.

When the children prove victorious and declare “Don’t mess with the Bronx,” it may all seem a tad corny and on the nose. But Rodriguez directs with energy to spare, making the dialogue quippy and the aesthetic inspired by Edgard Wright or Sam Raimi’s brand of kinetic editing. Vampires vs. the Bronx also boasts a notable supporting cast, including a brief appearance by Zoe Saldana, followed by Method Man as the local priest, and Sarah Gadon as the resident vampire leader. Breezing along with an 86-minute runtime, some of its characters feel underdeveloped, especially the girls—including the amusing live-streaming addict Gloria (Imani Lewis), or Miguel’s romantic interest Rita (Coco Jones). However, the whole thing races by with a few laughs and a few scares, and a worthy gentrification theme, making it easy to recommend for genre fans.