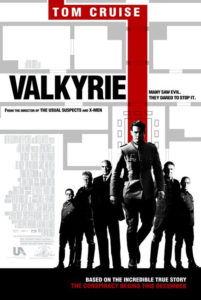 Everyone’s asked the hypothetical question: What would the world be like today if someone had assassinated Adolf Hilter in 1944? Several attempts were made on Hitler’s life, but obviously, none achieved success. The fact remains, he lived to create the most appalling legacy of any historical figure. And so how does Valkyrie, Bryan Singer’s new film about the greatest failed plot to assassinate Hitler, expect to absorb its audience in thrills and suspense when we already know the outcome?

The plot begins when Colonel Claus von Stauffenberg (Tom Cruise) returns from a lost campaign in northern Africa to join and lead an enduring group scheming behind closed doors to reclaim “Sacred Germany” back from Hitler’s Nazis. The plan includes reformatting an existing military contingency plan called “Valkyrie” to manipulate the reserve army into detaining Hitler’s SS, while Stauffenberg takes out the Fuehrer, and Stauffenberg’s men replace the Nazi government. After they’ve assumed power, they’ll surrender to the rest of Europe and pray for mercy.

Cruise’s career receives some much-needed rejuvenation in his heroic role, as Germany’s one-eyed, one-handed near savior, so put your doubts about his presence aside. Beyond servicing Cruise’s maligned public image, however, the film showcases an impressive roster of actors, few of whom are allowed to express their talent in this otherwise emotionally hollow story: Kenneth Branagh (Dead Again) is Major-General Tresckow, who disappears too early into the film; Tom Wilkinson (Michael Clayton) is the petty and stubborn General Fromm; Bill Nighy (Notes on a Scandal) is the twitchy General Olbricht; Carice Van Houten (Black Book) plays Stauffenberg’s loving wife; and Terence Stamp (Get Smart) is coup organizer Ludwig Beck. The cast of noteworthy names goes on, so you should stay for the credits.

Singer, directing the screenplay by Christopher McQuarrie, his writer from The Usual Suspects, doesn’t explore why the conspiracy has gained momentum, rather underlines the details of the event without considering its motivations. The audience knows why Hitler deserves a dirt nap, but what about the German officers? What changed in them between conforming to Hitler’s Nazi-ruled Germany to suddenly wanting him dead? To keep from pointing fingers or diving into political discussions, the answers are left simple: Stauffenberg’s choice is vaguely moral, never more complicated than a black and white distinction between good and evil. By not asking these questions, Singer and McQuarrie miss an opportunity to add emotional realism to the already impressive production design and grave circumstances of the story.

Valkyrie doesn’t thrill in the manner expected nor live up to the promise of its exquisite trailer. How can it? Of course, Stauffenberg fails, and everyone involved is executed for treason. Singer’s exploration of the scenario proceeds without the daring and trickery of a great suspense yarn, preferring a plainly straightforward tone, and yet avoids designation as “dramatic reenactment.” Presented in a quaintly uncomplicated manner, his film unfolds as expected, involving the audience on inexpressive dramatic terms.

In terms of craftsmanship, however, Singer’s film appears labored-over, details given glorious attention and each angle of every shot composition perfectly calculated: His camera rises above the gray courtyard of the SS Headquarters laden with red Nazi flags, he follows a single drop of blood that streams down Cruise’s hand, or he rests bird’s-eye view above a swimmer in a pool whose swastika mosaic lines the floor. Such powerful images, though meticulously detailed, are rarely dwelled upon in this film; an auteur might have held those shots and allowed the audience to soak them up. Instead, Singer cuts perhaps too quickly, allowing the intriguing imagery to pass by at a pace that retains the drama but was edited without an appreciation of artistry.

Completely serviceable, Valkyrie relates an important historical event without testing its audience. The film “gets the job done” by clearly communicating the plot, but doesn’t bind us with suspense or the inherent emotional potential a story of this magnitude should incorporate. If Singer’s goal was to wrap audiences in a tightly-wound thriller and pull the ripcord, and I think it was, he’s unfortunately failed. And though his intentions and results may deviate, the end product provides an interesting account worthy of attention, lacking the anticipated edge-of-your-seat experience, but grasping the events with a cool ease and admirable eye for detail.