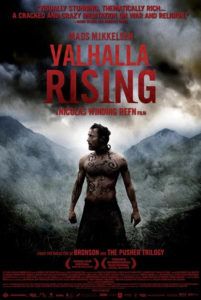 Stylishly poetic and weighty to exasperating extremes, Danish director Nicolas Winding Refn’s existential, primeval epic Valhalla Rising examines the combative relationship between the honor-bound pagans and the fanatical Christians in the world of Vikings. It’s a slow-moving combination of ridiculously gory violence, heavy metal music, and dreamy imagery set to no more than one or two handfuls of dialogue. Landscapes are beautiful but spare, and the tone is methodical and unforgiving. But the result is difficult to enjoy, as the whole picture resolves to be an obvious allegory for an alternate Christ tale where the holy martyr is replaced by a primordial, one-eyed Viking with an ax.

In a completely mute performance, Mads Mikkelsen (Casino Royale) plays the slave-warrior called One Eye, because, as you might suspect, he has only one eye. Shackled and kept imprisoned, he’s released to fight in muddy one-on-one bouts to the death. His opponents are taken down with speed and bloody precision, and after making a kill, One Eye holds out his wrists, ready to be shackled again. Hypnotic, red-hued dreams fill his head, but it’s no wonder, with all of the carnage he purveys. This is an incredibly bloody film: Brains are bashed in with a rock, there’s a disembowelment in grisly detail, axes penetrate various victims, and splattery blood sounds echo through it all.

One Eye eventually escapes his captors and spares the life of a young boy, Are (Maarten Stevenson), who becomes his companion and voice. Are speaks for One Eye, who seems to communicate to the child through penetrating glances. When they come about a band of Christians headed to the Kingdom of Heaven, they’re invited along on a crusade, and on the way, the troupe becomes lost in a mist at sea. Believing themselves cursed for having One Eye and the boy on their boat, the nonetheless Christians find land, but discover it’s not where they intended to go. Surrounded by thick forests, they’re plagued by an unseen people who attack them with stone arrowheads rather than iron. Slowly, their displacement drives them all to madness. Is this hell? They’re ancient Christians, so of course, they believe as much.

Refn seems ever-inspired by Stanley Kubrick’s A Clockwork Orange, as he’s evidently thrilled by surreal, ultra-violent imagery with the pretense of purpose behind it. As with his Pusher films and last year’s Bronson, the writer-director journeys into the realm of aggression with overt symbolic and savagely masculine imagery. But Refn’s uses of symbolism are apparent here, unlike his earlier films. Delving into common iconographic pagan and Christian representations, Refn’s attempts at grand purpose become transparent and haughty, even slightly insulting. Especially when paired with the film’s pervasive violence and laughable chapter titles. One can’t help but think of the corny and overbearing chapters to Lars Von Trier’s Antichrist when Refn flashes “Chapter I: Wrath” and “Chapter V: Hell” across the screen.

Though gorgeously shot in Scotland to capture hazy and bleak landscapes of green mountains and dense forests, the film’s beauty hardly compensates for its inaccessible tone. Somewhere between a Werner Herzog-esque voyage into madness, a Ridley Scott epic, and a Terrence Malick quest of poetic searching, Refn’s film becomes hard to take seriously when the heavy metal guitars of Peter Kyed and Peter Peter’s soundtrack strike in the finale. Is it possible to have a period epic without rock music anymore? Movies like 300 and this should take a lesson from this year’s Robin Hood, which approached the material in a classic-yet-realist sense. But then again, Valhalla Rising is anything but classical; rather, its obvious post-modern descriptions and omnipresent self-importance leaves the film in a limbo of indifference.