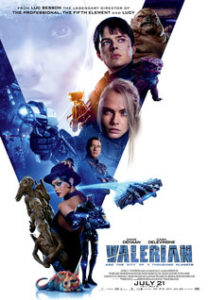 Luc Besson’s Valerian and the City of a Thousand Planets opens with a marvelous prologue that explains how the title’s massive construct went from the International Space Station to the twenty-eighth century’s largest known spatial metropolis, called Alpha. Set to David Bowie’s “Space Oddity,” the sequence shows Russian and Chinese modules docking with their U.S. counterparts in the twentieth and twenty-first century. Eventually, a group of aliens makes first contact, attaching their modules to the station orbiting Earth. Over the years, countless alien species dock onto the growing heap, until its mass and gravity threaten to outweigh the planet below. Four hundred years later, the station has been moved into a deep space current, where it houses millions of aliens from thousands of solar systems around the “four corners of the universe.” And while this account of Alpha’s growth into the largest intergalactic space station proves elegant, it remains the most subtle, measured sequence in a scattered, overstuffed, but also a rather fun hunk of sci-fi escapism.

Besson’s dream project was based on a twenty-plus volume French comic book series that he read as a child. In fact, the director has already made a feature based, at least in spirit, on the comic Valérian and Laureline; it was called The Fifth Element (1997), and it captured the wildly imaginative, sexy, and multi-species appeal of the book, started in 1967 by writer Pierre Christin and artist Jean-Claude Mézières. The technological and budgetary limitations of creating the film earlier than now presented a logistical challenge for Besson. How does a film bring countless species of aliens to life in an economical way, but also make them look convincing? Gone are the days of the original Star Wars trilogy, when crowds of aliens would be comprised of practical makeup and costumes; and subsequent attempts to render believable aliens with CGI have proved less than successful (see the Star Wars prequels). But then along came James Cameron’s Avatar (2009), which brought its Na’vi to life with revolutionary technology. Only after that landmark release did Besson consider making his cherished comic into a feature film. Produced by Besson’s independent French studio EuropaCorp, the film’s reported budget soars over $200 million, plus marketing costs, making it the most expensive non-studio film ever made, and certainly the most expensive French film ever made.

The exuberant, brightly colored, and zippy result looks like candy and tastes like junk food. Even so, it contains an infectious sense of imagination and energy. The story follows Major Valerian and his partner (and also would-be lover) Sergeant Laureline, two government soldiers carrying out top-secret missions in whatever dimension their orders take them. The former is played by Dane DeHaan (Chronicle, The Cure for Wellness) with a surfer dude accent, under a distracting mop of dyed hair, and looking like a teen playing in an adult space suit. Model-turned-actress Cara Delevingne (Suicide Squad) plays the latter with expressive eyes, spontaneity, and moxie galore. Besson’s female characters are usually more independent and empowered than his male characters, whom by contrast, are often bound by duty or some personal code. Such is the case here, with Valerian devoted to his rank and Laureline motivated by her heart, which remains their supremely conventional dynamic throughout the film—until, of course, he realizes that to win her love, he’ll have to demonstrate his willingness to set aside his professional obligations. 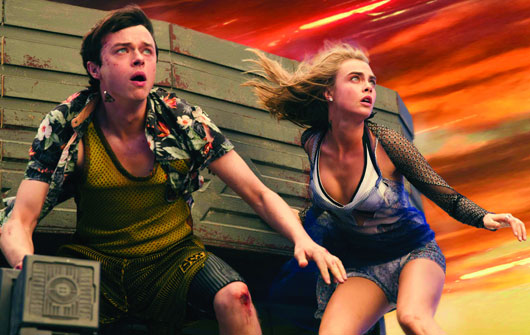 Early in the film, an inter-dimensional shopping mall called Big Market provides the incredible setting for the recovery of an artifact—a cute animal called a Mül Converter, a living relic of the Mül species whose home planet was destroyed in a government coverup. The mission leads our heroes back to Alpha, where they report to their commander (Clive Owen), only for him to be kidnapped by the last remnants of the Mül people who want their converter back. The story thrusts Valerian and Laureline from one set piece to the next in a series of escapes, shootouts, chases, and encounters with all manner of strange alien species. The two leads maintain a romantic, unconsummated flirtation, with Valerian a less interesting, two-dimensional hero, and Laureline a much more compelling and vibrant example of two dimensionality. After showcasing former model Milla Jovovich in The Fifth Element, Besson likewise offers Delevingne a fine showcase for her acting chops.

Some of the film seems very familiar, like the bulbous crimelord (voiced by John Goodman) who resembles Jabba the Hut. Some of it is thrillingly assembled, like the Big Market sequence, which recalls the layered heists in Inception (2009). But then, some of it is downright cringeworthy: Consider an interlude in which Valerian must disguise himself to rescue Laureline from a group of tribal aliens. He acquires the help of a shape-shifting stripper named Bubble, played by Rihanna, whose sole presence in the film is to supply audiences with a multi-costumed striptease. In Bubble’s globulous natural state, the character looks like a bad cartoon inserted into the proceedings, while Rihanna’s line readings sound wooden and removed from the onscreen action. Worse, Ethan Hawke appears in eyeliner, a goatee, and nose piercings as Bubble’s pimp, and it seems as though Hawke wandered onto the set one day, and Besson haphazardly allowed him to play the role. Several scenes in the film feel superfluous, like excuses to introduce another neat alien species or gizmo. It’s all very diverting, if inconsequential.

Much like The Fifth Element, the kinetic pace of Valerian and the City of a Thousand Planets does much to distract viewers from the messy plotting. Unfortunately, several scenes, including a climactic encounter saturated in several minutes of clunky exposition and flashbacks, stop the momentum dead. The special FX throughout the two-hour-and-seventeen-minute feature are impressive, with only a few exceptions (Bubble comes to mind)—the standouts being the Mül people, who look like the lovechildren of the Na’vi and the Engineers from Prometheus (2012). Visually, it’s difficult to give cinematographer Thierry Arbogast much credit when the film is mostly CG-animation, but the outcome is an eye-popping sensory overload nonetheless. Besson’s film ultimately suffers from the same affliction as the Wachowski siblings’ Jupiter Ascending (2015), the problem being too much plot and not enough substance or chemistry between its two leads. Cramming every frame with visual stimuli can work wonders when paired with narrative simplicity or characters that live and breathe. But the outcome here is uneven: admirable for its ambition and mindless entertainment value, unable to hold up under close scrutiny, and often dazzlingly beautiful.