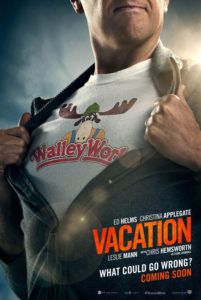 Within the first minutes of Vacation, during the opening titles in fact, moviegoers are meant to laugh at two penises, one butt crack, morbidly large breasts, and snot running down a child’s face—among many other unpleasant sights. Granted, these images seem to be embarrassing real-life vacation photos, and by comparison prove immeasurably funnier than the badly Photoshopped selection that plays against the end credits. (Note: Why must Hollywood insist on Photoshopping family photos in movies? Would it be too much to ask to have their actors slip into various outfits at a few locales for actual photos, instead of that awful, takes-you-out-of-the-experience Photoshop look? But I digress.) This sequence in the opening credits serves a purpose, however: to prepare the audience for what comes next, which is over 90 minutes of juvenile, unrelatable, and occasionally mean-spirited humor. Worse, the movie sets out to stand on its own, away from the franchise it’s attempting to restart and fails miserably.

A reboot of the National Lampoon’s Vacation series popular in the eighties and nineties, writer-director team John Francis Daley and Jonathan M. Goldstein (writers of Horrible Bosses) seem to have missed the relatable and daresay subtle quality of the originals. In each entry, Chevy Chase’s idealistic and impractical father Clark W. Griswold tried to force an authentic vacation experience on his long-suffering wife (Beverly D’Angelo) and two children, Rusty and Audrey (played by various actors over the years). The originals were always absurd and broad, yet rarely too far over-the-top, because you could always relate to the generally pleasant characters—after all, they were John Hughes creations. Daley and Goldstein’s movie is unique in that it has none of those qualities. Much of the humor in Vacation could be described as “just-plain-wrong”, but not in the good way. Shock and gross-out humor has its limits, and these filmmakers go out of their way to explore those limits.

However, Daley and Goldstein’s screenplay pays homage to Hughes in another, less direct way. Their movie follows Ed Helms as Rusty Griswold, the son of Clark, an airline pilot for a cheap regional airline. Like many a Hughes family, Russ and his wife Debbie (Christina Applegate) live in an upper-middle-class suburb of Chicago. Despite living in what many of us would consider a small mansion, as the movie’s road trip scenario carries on, we’re perplexed as to why this family can afford such an immaculate home and yet must stay in dank motels, where the bathtubs have mushrooms growing out of the drain and dried blood on the walls. No matter. Russ, who always seemed level-headed in the originals and aware that his quixotic father was trying too hard, inexplicably repeats his father’s mistakes when he vows to take his own family to Walley World, the fictional theme park destination of the first Vacation in 1983. Rather than fly (say, on his airline), Russ wants his family to bond over the road trip experience.

Along the way, the audience must suffer any number of borderline atrocities. Debbie relives her college days with some excessive drinking and vomiting at her former sorority. Thinking they’ve found a hot springs, the Griswolds bathe as a family in a pool of raw sewage filled with needles and human body parts. They visit Rusty’s sister Audrey (Leslie Mann) and her macho weatherman hubby (Chris Hemsworth, proving comedy isn’t his game) for some more penis jokes, followed by the bloody massacre of a steer. And then there’s the movie’s inexplicable obsession with Seal’s song “Kiss from a Rose”, which I cannot even begin to explain. But it’s not all unpleasant. Charlie Day appears as an emotionally ruined Grand Canyon rapids tour guide for a slice of humorous darkness. There’s also a funny ongoing bit about the sensitive older son (Skyler Gisondo) being bullied by his foul-mouthed, much younger brother (Steele Stebbins)—a dynamic that represents the movie’s most memorable moments. More offensive is the Griswolds’ voice navigator, which Russ accidentally sets to speak Korean; the result is an abrasive, excessively angry voice that seems to create a stereotype all its own.

As for the actors, Helms is perfect for this material, because he’s no friend to subtlety. Despite growing up with a father like Clark and watching him fail from the sidelines, Rusty seems to have grown up into a hapless schmuck. Applegate fares better and proves quite likable in her role, as do Gisondo and Stebbins. But regardless of several hearty laughs, the material is rooted in lowbrow humor devoid of the sweetness that made the originals so enduring. Early in Vacation, in a sly but ultimately failed attempt to be meta, Rusty talks about his experiences going to Walley World as a child. The children remark, “I’ve never even heard of the original vacation.” Rusty, and thus the filmmakers, proclaim, “It doesn’t matter that you haven’t heard of it. This vacation will stand on its own.” Except it doesn’t. It only makes one want to revisit National Lampoon’s Vacation, embrace its nostalgic joys, and ponder how low comedy has become, compared to thirty years ago.