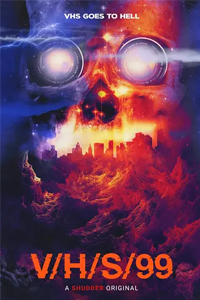 More significant than the sum of its parts, the V/H/S series has been around for a decade and produced five entries of wavering quality. But that’s to be expected from anthologies of found-footage horror. Anthologies often prove uneven because, invariably, some stories are better than others. As a result, they tend to feel like a mixed bag, offering one or two unforgettable segments scattered amid others of mediocre quality. V/H/S (2012) and its sequels have even more challenging circumstances to overcome, given that they’re comprised of several found footage shorts made to look like tape recordings, which by design, end badly. Launched by mumblegore filmmakers such as Ti West, Adam Wingard, and Joe Swanberg, the movies deploy grainy images and sometimes rudimentary cameras to create an intended low-fi appearance, delivering what ultimately amounts to a mock snuff film. Although I tend to feel unsatisfied when they’re over and write about them from a mostly disappointed perspective, I reflect on them fondly, if only because the individual segments that worked for me have a place in my memory banks while everything else has been deleted. Fortunately, V/H/S/99 delivers a higher-than-average number of worthwhile segments.