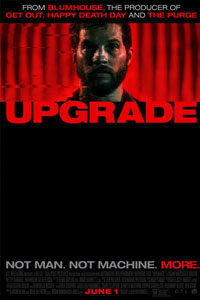 Leigh Whannell has been a fixture in low-budget horror over the last fifteen years, having written several entries in the Saw and Insidious franchises. He branched out of the torturous serial killer and supernatural arena with rare exceptions like Cooties (2014), and he occasionally does some acting, but he’s typically a screenwriter and executive producer of genre fare. After directing his debut feature with the lackluster Insidious: Chapter 3 (2015), Whannell applies his talent to a mashup of technological paranoia and revenge story with Upgrade. Making superb use of his modest budget under BH Tilt—the Blumhouse Production offshoot that distributes non-supernatural movies such as The Green Inferno (2015) and The Belko Experiment (2017)—the writer-director supplies a modestly entertaining tale of bloody vengeance under a science-fiction façade.

In the convincingly conceived not-too-distant future, automation operates our vehicles and homes, while computer monitoring systems and tracking drones record almost everything. The winkingly named Grey Trace (Logan Marshall-Green) remains stubbornly analog despite the world’s digital saturation. The future has been embraced by his wife, Asha (Melanie Vallejo), a technophile who loves her self-driving solar-powered electric car. Grey prefers to listen to classic rock and fix antiquated, gas-powered muscle cars. (Your guess is as good as mine why these two are together.) After a horrific car accident in Asha’s automated vehicle, several goons approach the wreckage and, for reasons explained later in the story, they kill Asha and leave Grey a quadriplegic. The following scenes show Grey wallowing in a self-pity that descends into a suicide attempt, until he’s given a rare chance to walk again.

Enter Eron Keen (Harrison Gilbertson), a blend of Dane DeHaan, Dr. Frankenstein, Steve Jobs, and Jared Leto from Blade Runner 2049 (2017). This is an absurd and nonsensical character. A gazillionaire, Eron lives in an underground, futuristic abode, away from other people, devoted to his digital inventions. Behind bleach-blond hair and a laughably self-serious wardrobe (think J.P. from Grandma’s Boy, 2006), Eron says more than once that he spends so much time away from people that he doesn’t understand how normal humans behave and emote. He even wears a protective mask in public, as his solitude has made him more susceptible to everyday diseases. And yet, early on, we’re made to believe that Eron hired Grey to fix up a vintage sports car, despite Eron looking like the only car he’s ever driven exists in virtual reality. Any discerning viewer knows something’s strange about Eron, besides the spelling of his name.

In any case, Eron specializes in robotics technology, and his latest project, called Stem, is a top-secret computer chip that will provide a connection to the otherwise severed link between Grey’s brain and body. Once installed, however, Grey realizes that Stem is an artificial intelligence that sees what he sees, hears what he hears, and so forth. It also turns out that Stem can speak to Grey in his head, which is something Eron didn’t anticipate, supposedly. Voiced by Simon Maiden, the computer talks with the mellow yet eerie tone of the malevolent computer from 2001: A Space Odyssey (1968) and, what’s more, can take control of Grey’s body if the situation calls for it. Better still, when Stem controls Grey’s body, he becomes a super-soldier who moves with the efficiency and exactitude of a computer. It’s a promising setup, to be sure.

Of course, given Upgrade’s use of the “fridging” trope, Grey uses his newfound abilities to get revenge on the men who killed Asha in a series of visceral confrontations—shot with a meaningless, albeit neat-looking body-mounted camera technique by cinematographer Stefan Duscio. These scenes prove fascinating, as Grey discovers the limits of Stem’s functionality. Take how Stem will notice details in a room that Grey could not, or how it can quickly hack into other computer systems. It’s self-preservation instincts, however, are more concerning. Meanwhile, because the advanced tech is supposed to be a secret, Grey must pretend to be paralyzed when in public, which makes for some dark humor when he confronts goons in his wheelchair, and then he makes short, gory work of them. But Grey isn’t the only bioengineered person, and he eventually faces off against some baddies of equal, if not superior cyborg ability. At the same time, the snooping Detective Cortez (Betty Gabriel) stops investigating Asha’s killing and starts to suspect that Grey can walk.

Whannell, using HAL 9000 as the basis for Stem, inevitably turns the movie away from a revenge plot and into what becomes, predictably, an actioner about corporate espionage and the dangers of artificial intelligence. Upgrade’s plot has been strung together in a series of loose ties and sometimes nonsensical clichés, but Whannell confidently handles even the most absurd twists and turns. He directs some thrilling action, and the repartee between Grey and Stem provides plenty of laughs, but the tired trope of a male hero avenging the death of his murdered significant other doesn’t give the material enough emotional heft or Grey enough distinction. Regardless of its plotting, much of Upgrade remains engaging for its imaginative ideas about the mind-body integration of technology. Even though it plays like a 90-minute episode of Black Mirror, it would be a pretty good episode.