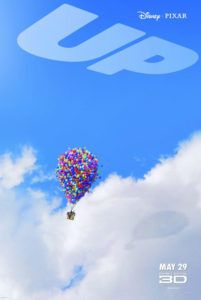 The Spirit of Adventure. Pixar Animation Studios has captured it before, but never so precisely as in Up. The themes throughout the picture address life’s immeasurable potential to take a journey or explore the unknown. Through the studio’s gloriously bright and colorful animation, tangible and beautiful and alive all at once, they inhabit an emotional complexity that is conveyed with the utmost ease. There are layers to this picture; however, each is clearly described for children and adults alike, rendering a universal entertainment that wisps the viewer away into an escapist fantasy remarkably devoted to its very real characters.

As a boy, Carl Fredricksen (voice of Ed Asner) aspired for adventure with his playmate, and future soul mate, Ellie. The two children dreamed of visiting South America, to a faraway land called Paradise Falls, discovered by daring explorer Charles Muntz (voice of Christopher Plummer), containing unusual creatures never before seen by human eyes. The children kept an “Adventure Book” to log their fanciful wish of someday living in Muntz’s forgotten wonderland. But their dreams, like many of us, were slowly consumed by reality. Carl and Ellie were married, but they could not have children, which made their bond even stronger. Years pass, and in time, Carl, a 78-year-old balloon vendor, finds himself alone. Ellie has passed on and his life of adventure with her. This is all shown in a beautiful, wordless opening sequence that establishes the entire picture’s emotional substance.

Carl has become a cantankerous old man living alone in the rickety home he and Ellie built, a city growing all around him. He speaks to his absent wife, aching for her company. When he finally must resign himself to a retirement home, he instead launches the house from the city with countless helium-filled balloons and takes off for Paradise Falls. Accidentally stowed-away on his porch, however, is Russell (voice of Jordan Nagai), the young Wilderness Explorer desperate to earn his “Assist an Elderly Person” badge. Russell’s sweet virtuousness recalls the young Carl, though the grumbling senior doesn’t realize it.

When they arrive at their destination, the world they find is best discovered for yourself. Among the mysteries are misty mountains, a chocolate-loving exotic bird, and a talking dog named Dug (voice of Bob Peterson). The reject of a small army of talking canines, Dug, and those like him, speak via electronic collars. If you’ve ever questioned what dogs would say if they could talk, this film captures it, in all their loving, naïve, desperate-to-please splendor. Who created these collars? Carl doesn’t care. He just wants to set his house down by the falls, as he promised Ellie he would do long ago. But as Carl quickly learns, there’s more at risk than his own desires.

Arguably the funniest of the Pixar films, the laughs are only matched by the thrills. Carl’s crankiness and Russell’s hilarious innocence keep the audience laughing, while dog humor is prevalent and twisted slightly by their ability to speak. Take the hench-pooch, Alpha, a Doberman Pinscher who stands with a threatening glare until his falsetto voice, raised by his broken collar, squeaks as if he was sucking the helium from some of Carl’s balloons. Near-constant humor helps ease some of the film’s later, more gripping suspense that might otherwise frighten youngsters.

As with every Pixar film, the stakes are set from the beginning. But these aren’t mindless conflicts cleared away by equally mindless animated antics. These characters are tangible, the turns of their stories occasionally heartbreaking. Pixar’s animators illustrate the characters through mild stylizations that don’t detach from their humanness. Of course, they’re cartoons, but they have depth and sheen and the faultless illusion of flesh. Cute animals are present not merely to elicit awww reactions from the audience; rather, they have fully conceived personalities, even while remaining true to their nature. Dogs are just dogs. People are just people. How they react in this amazing situation is what’s extraordinary. And the imagery used within the story captures a kind of vintage iconography, employing objects rooted in the simplicity of their design, such as balloons and blimps, bringing to mind an immediate classicism.

Director Pete Docter, who helmed Monsters, Inc. and conceived Toy Story and WALL•E, works alongside co-director and writer Bob Peterson, himself the writer of Finding Nemo. Together, they create a world where the impossible is just a step passed intention, where adventure arrives by your own making, and where escapism doesn’t necessarily mean escape. Once again, Pixar shows audiences that the potential for animated features is boundless in the right hands. In contrast, competing studios like Dreamworks and Fox prove time and again just the opposite.

How appropriate then that the film speaks with awe about the pure concept of Adventure, about the romantic possibility of unexplored nature and newfound technology colliding in a grand discovery. Pixar finds wondrous ways of touching on this theme on and offscreen, through their story and by way of their breakthrough animation techniques, while also acknowledging that the need for adventure and exploration have tragically become characteristics of the past. And so, Pixar films are contemporary cinema’s abundant fountain where our thirsty imaginations are quenched, as they can realize the most spectacular story, infuse it with the most sincere of human emotions, and render it with the most visionary narrative scope.

Up is the kind of film where even critics find themselves incapable of putting into words just how cheerful and entertaining it is, ever at a loss to explain how everything is just right. Each line of dialogue and the accompanying gestures extract the precise emotion intended. As always, from Toy Story to WALL•E, Pixar’s clarity of purpose astounds. Flawlessly evocative, the film’s joys are so very joyful and the saddening moments ever so tender. Miraculously transporting us up and away through means by which only Pixar can, this is Movie Magic at its purest, realized with all the infinite possibilities of the cinema, animated or otherwise.