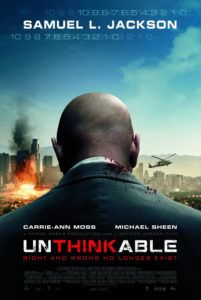 Chances are you haven’t heard of Unthinkable, the new movie starring Samuel L. Jackson, Michael Sheen, and Carrie-Anne Moss. It’s a conversation-starter that questions the justifiable lengths our country should go in a time-sensitive terrorist scenario. But, for reasons best attributable to Hollywood’s lack of daring, the movie never saw theaters and made its debut on home video. Except, this isn’t the usual direct-to-video dribble you’ll find occupying the shelves of Blockbuster or clogging the instant streaming selection on Netflix. In addition to the stars, whose performances are dead-on, production values are high, and the script by Peter Woodward contains some intriguing questions.

So what happened? Why was this $11 million production, which would have made a reasonable profit in theaters—if released in lazy months of August, September, or January to March—reduced to a home video debut? It seems the financial backers at Senator Films went out of business before securing a theatrical distributor. And because Hollywood generally fears any politically testy material, no one would step up to release the movie. Senator signed over the home video rights to Sony before closing its doors, and Sony refused to take any more risk than that. The result isn’t a movie that would’ve won awards, but it certainly deserves to be seen by a mass audience.

The story begins when an American, identifying himself as Steven Arthur Younger (Michael Sheen), sends out a video in which he claims to have placed three nuclear weapons in three U.S. cities. The authorities quickly catch the wanted terrorist, but only because Younger, for reasons unexplained, wants to be caught. The government calls in the local Los Angeles FBI anti-terrorist unit, led by Agent Brody (Moss), to supervise the questioning. But they also summon a mysterious figure known only as ‘H’ (Samuel L. Jackson)—one of those independent contractor types who says he’s not affiliated with any government agency because he “doesn’t exist”—to conduct the interrogation. Meanwhile, Younger hasn’t even announced his demands yet.

When ‘H’ walks into the room, most of the military and FBI honchos have never seen him before. He’s dressed plainly in civilian clothes, and he’s escorted by CIA operative Thompson (Stephen Root), who had been keeping ‘H’ in hiding because he has “enemies”. Everyone but a few select players is asked to leave the Top Secret location, and the remaining few quickly begin to question the methods of this ‘H’ figure. He begins his interrogation by chopping off one of Younger’s fingers with a small fire ax, and from there, moves on to various forms of torture that the others continuously try to prevent. Younger eventually reveals his rather American-favored demands: he wants no more U.S. funding of rebel regimes and he wants to bring home the troops from all Muslim nations. Agent Brody refuses to take part in the torture at first, but as the deadline to Younger’s deadline approaches, the situation becomes desperate, and she second-guesses her convictions.

Australian director Gregor Jordan (Ned Kelly, Buffalo Soldiers) lays out a complicated moral scenario, which, despite ending on an unsatisfying dramatic note, can’t help but leave the audience questioning what they believe to be right. Should ‘H’ have been allowed to do whatever’s necessary to find the bombs? Should one life (or two or three) be sacrificed for millions? Does ‘H’ have a point when he suggests that evil should be fought with evil, and if so, what’s the limit that we can use and remain just? Or, as he suggests, is it simply a matter of keeping torture out of the public eye, as the general populace likes results but doesn’t like seeing the means? It’s difficult to say not to use torture when the alternative is millions dying. But then Agent Brody, with her high ethical standards, also has a point, in that such lows set a criminally brutal precedent and render the torturers just as barbaric as the terrorists. Then again, why deny it? We’re human. We’re all barbaric. Though these questions are never answered in any satisfying way, it’s more important that as the plot plays out, the story remains focused on the morality of it all, and never reduces itself to “torture porn” glorification of violence for entertainment value.

The trio of actors at the movie’s center gives impressive, intense performances, particularly Sheen, whose work on prestigious films like Frost/Nixon and B-movies like Underworld make him an interesting presence onscreen. In the role of Younger, he’s just vulnerable enough to make his character worthy of our empathy, but then, later on, becomes a shocking monster. Jackson has the same dynamic, in that he’s capable of grossly inhuman torture, but he’s also a family man who believes in a black-and-white logic of numbers that justifies his actions. Moss represents the good in each of us, the person who wants to do the right thing but, deep down, knows that torture probably works.

The 2007 film Rendition posits many of the same questions asked here, and that film was likewise unsatisfying because it failed to explore its subject in any confronting way. Unthinkable avoids that mistake by placing the audience in an uncomfortable situation—where truly there is no correct answer—and forcing a resolution. The finale, however, proves unsettled because there’s no way any ending could meet the demands of its various moral perspectives. In that sense, the movie ends on a downer, with a scene that was originally cut from what would’ve been the theatrical release. And though the movie leaves a bad taste in one’s mouth, the experience is worthwhile, if only for the ensuing conversation with your fellow movie-watchers.