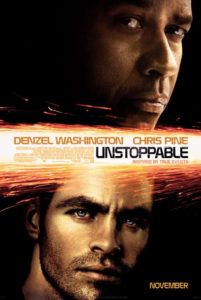 Like most of his films, Tony Scott’s Unstoppable assaults the senses. All manner of cinematic loudness and flashiness is presented onscreen with a concentration on momentum more than pesky notions of character development or authenticity, leaving the cast to pick up the pieces. Thankfully, Scott has a strong director-actor relationship with Denzel Washington (this is their fifth collaboration), who stars alongside Star Trek’s Chris Pine. Given his stars and the rather straightforward disaster-aversion scenario, not to mention the PG-13 rating, and this is Scott’s most accessible film in over a decade.

Inspired by actual events that took place in Ohio in 2001, the film changes the facts around. The story involves a series of mishaps that send an unmanned, half-mile-long freight train carrying dangerous chemicals rolling through Pennsylvania at high speeds. The train company’s yard supervisor (Rosario Dawson) performs for the movie trailer and sums up: “It’s like a missile the size of the Chrysler Building!” Details about the situation are relayed via news footage, and not even authentic news footage at that. Reporters, primarily from Fox news affiliates (it is a Twentieth Century Fox release, after all), inform the viewer of the potential dangers of the train crashing, complete with digital diagrams and demonstrations. Much of the movie feels like we’re watching Fox News, which is not a feeling most moviegoers want in the theater.

As authorities scramble to devise ways of preventing the Worst Case Scenario—the train derailing when it reaches the heavily populated Stanton, PA—two blue collar workers, seasoned engineer Frank (Washington) and trainee conductor Will (Pine), realize they’re on the same track as the runaway. Do they have time to get off the track and avoid a head-on collision? Of course they do; they’re the heroes. Frank and Will both have incredible egos, which allows for plenty of jocular banter along the way, and an equal amount of disobedience when The Man tells them not to carry out their own solution. Putting his experience to good use, Frank realizes the company’s attempts to derail the runaway won’t work, so he opts to chase the runaway in reverse and pull it the opposite direction. The execution of his plan provides admitted “edge of your seat” thrills.

This is a comparatively restrained version of a Tony Scott film, at least next to his last few over-the-top releases (Domino and Man on Fire come to mind). After his heyday between Top Gun and Crimson Tide, Scott’s action movies have become absurdly scattershot with manic editing and bloated running times. But Unstoppable tones down the flickery light show and keeps the runtime just over 90 minutes, returning a mid-1990s version of Scott’s direction to the screen. After Scott’s train-themed flop last year (The Taking of Pelham 1 2 3), Fox opted to contain the director some by cutting his budget, including his salary and that of star Denzel Washington by more than half each. Good idea, given that Scott hasn’t had a film that’s earned its budget back at the box office since 2004.

Nevertheless, employed are all the usual directorial weapons in Scott’s arsenal. Those swooshing exterior camera movements captured by helicopter establish the scene’s layout, and rotating cameras circle interiors for particularly effective control room scenes—both tricks that Scott has used since Enemy of the State. As always, the editing is choppy, but not in the unintelligible way of Man on Fire; audiences will always know what’s happening onscreen. Scott also plays with the film speed (something he’s been doing since Spy Game), where he amps up and slows down the image. Later filmmakers, like 300’s Zack Snyder, have adopted this trick and claimed it as their own.

The screenplay, by Live Free or Die Hard scribe Mark Bomback, has no end of clichés. Bureaucratic train company executive Kevin Dunn refuses to listen to reason, calculating the cost of “the right thing to do” and deciding it’s too expensive. Frank and Will share their family stories near the end because they must, the train’s cabin acting as confessional. Frank recounts how his daughters work at Hooters (the filmmakers had to find some way of injecting sex into the scenario), while Will sets up how he’s going to save his crumbling marriage by stopping the runaway. The characters are by no means three-dimensional, but it helps that they’re played by such genial actors. Washington and Pine could hardly be more likeable, with the former withdrawing to the ‘old guy’ role so new talent can assume the ‘young hotshot’ role. (It wasn’t so long ago that Washington was the ‘young hotshot’ positioned alongside Gene Hackman’s ‘old guy’ in Scott’s Crimson Tide.)

Of course, Unstoppable robs audiences of the usual disaster movie explosion in the finale, resulting in an anticlimactic finish as the runaway slows to a gradual halt. But at least the filmmakers can say they stuck somewhat to the true story, even though nearly every other detail about the actual event was Hollywoodized for the sake of entertainment value. Despite that, Scott delivers an exciting and fast-paced ride that audiences will enjoy, largely due to the affability of his two leading men. Had two other actors been cast, no doubt the film wouldn’t have worked in the contrived-yet-effortless way that it sort of does.