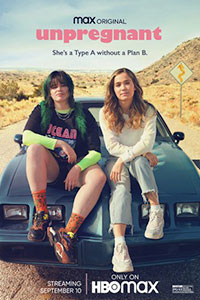 Unpregnant, the second film in 2020 to confront the realities of a teen trying to get an abortion in the United States without parental consent, makes a lighthearted comedy out of potentially taboo subject matter. The cultural war’s battle over women’s reproductive rights continues to rage, so a road trip movie about two teenagers driving nearly 1,000 miles to terminate a pregnancy might, on the surface, appear to be unlikely material for accessible entertainment. Films like Eliza Hittman’s beautiful and realist Never Rarely Sometimes Always from earlier this year serve their purpose by portraying the human reality of such situations. Films like Unpregnant, however, serve another, equally important purpose by normalizing abortion as a reality many women face. To be sure, this is conventional filmmaking, not an arthouse release whose reach may be limited to film enthusiasts. Mainstream audiences will recognize a familiar set of tropes and devices, making Unpregnant look and feel like any number of teen comedies or road trip movies, much to its credit.

Hittman’s film focuses on a working-class protagonist who struggles to make the journey to receive her abortion. She comes from a dysfunctional home and doesn’t always have enough money to eat or find shelter along the way. For those who tend to read films as emblematic of the groups they portray, Never Rarely Sometimes Always may have inadvertently made a false association between abortion and a particular class or economic status. By contrast, Unpregnant feels like a John Hughes movie about upper-middle-class suburbia. Based on the young adult novel by Jenni Hendriks and Ted Caplan, the film follows a Missouri teen, Veronica (Haley Lu Richardson), who discovers she’s pregnant in a high-school bathroom. She’s an overachiever, near the top of her class, and comes from what your grandmother would call a “good home,” complete with crucifixes and a portrait of Pope Francis on the wall. Bright and popular in school, no one would think Veronica would ever get pregnant, much less want an abortion.

The problem is that Missouri calls for parental consent before minors of 17 years or younger can obtain an abortion, and Veronica’s parents, who are opposed to the idea, would never give her permission. The nearest clinic that doesn’t require Veronica to obtain her parents’ consent resides in Albuquerque, over 900 miles away. As a teenager with few resources, she’s forced to scrape together some cash and supplies, and then try to secure a ride for a tightly budgeted trip. Enter Bailey (Barbie Ferreira), a punkish loner and Veronica’s former best friend from childhood. Bailey learns about the pregnancy in the hilarious and awkward first scene, and she also helps Veronica keep it a secret from the school. Eventually, she agrees to drive her ex-friend to the clinic, which gives way to a prototypical road movie scenario, coupled with a heartwarming tale of sisterhood unfolding over miles of highway.

The five credited screenwriters pack the film with various detours and pit stops, some more developed than others. Veronica’s boyfriend Kevin (Alex MacNicoll) might seem like a dopey romantic at first, until Veronica learns that he knew about his condom breaking and said nothing. When he starts following Veronica and Bailey, he mistakes his stalking as persistence driven by love. But Bailey has some genuinely romantic moments with a monster truck driver played by Australian pop star Betty Who, a dead ringer for Furiosa’s sister. And speaking of Mad Max: Fury Road (2015), a disturbing encounter with a couple of pro-life kidnappers (Sugar Lyn Beard and Breckin Meyer), who work for a crisis pregnancy center and want to force Veronica to keep her baby, ends with a high-speed chase reminiscent of a George Miller action extravaganza. Unfortunately, Giancarlo Esposito’s curious presence as a paranoid limo driver feels like his backstory was trimmed, leaving the character’s motivations underdeveloped and somewhat baffling.

Director Rachel Lee Goldenberg, best known for her Lifetime original A Deadly Adoption starring Will Ferrell and Kristen Wiig, creates a blend of teen romp and Thelma & Louise (1991) self-actualization. Richardson and Ferreira have plenty of chemistry to that end, making their friendship feel natural and quirky from their extended secret handshake to their shared ability to speak Klingon. The rekindling of their bond is not without conflict to overcome, of course, including Veronica’s role in a Mean Girl clique and Bailey’s issues with her estranged father. But Goldenberg and editor Julia Wong rely too much on long road trip montages of billboards, countryside, and the occasional landmark—often set to country or pop music that, admittedly, was not to this critic’s taste. Although requisite to show progress in their journey, the montage sequences drag on, and by the third or fourth, the viewer begins to wonder if the 104-minute runtime couldn’t have been reduced to 90 minutes by avoiding this standard road trip device.

Unpregnant is often riotously funny and affecting in its portrait of young women defying several forces trying to keep them from making their own choices. It also supplies a welcome catharsis. Consider the satisfying moment Veronica finally snaps. She shouts to the world, “I should not be here! I should be able to just walk down the street” to have an abortion. And then she asks, “Why in the hell do you have to have parental consent to get an abortion, but not to give birth to a child?” The entire film, Veronica tiptoes around saying the stigmatized word “abortion,” and when she finally releases her frustrations, inhibited by the lack of positive social discourse about the subject, it feels like a personal victory. The ongoing battle for reproductive rights is exhausting and frustrating, and it was refreshing to see someone screaming about that frustration using plain words and humor. Though, proclaiming the obvious unfairness and hypocrisy of this system probably won’t convince a staunch pro-lifer to change their mind. Still, Unpregnant offers a PG-13 comedy that also doubles as food for thought for young women who might be weighing their options or are simply outraged by their lack of access to reproductive healthcare.