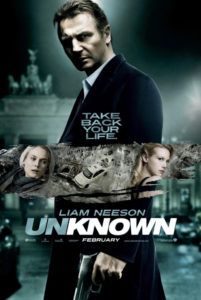 In Unknown, director Jaume Collet-Serra flips the conventions of archetypal Alfred Hitchcock films on their head with a kind of reverse-Wrong Man thriller. But, in due course, the film’s inventive updates on established material serve the same escapist, entertaining purpose. The Master of Suspense often framed his leading man for murder, sending him on a mission through impossible adventures at landmark locales to clear his good name and rescue the blonde damsel. From The 39 Steps to Saboteur to North by Northwest, this was Hitchcock’s most recurring story structure. And while modern nods, such as Spielberg’s Minority Report, have paid homage astonishingly well, few have turned the basic plot elements of Wrong Man thrillers inside-out like this.

Liam Neeson plays Dr. Martin Harris, a botanist traveling to Germany with his wife (January Jones) for a scientific conference. After a car wreck in a taxi, he awakens from a coma to find someone has stolen his life. He has no identification or friends to prove who he is, and everyone around him, even his wife, insists that another man, played by Aidan Quinn, is the real Dr. Martin Harris. After all, Quinn’s Harris has all the necessary supporting documentation. At first, Neeson’s Harris thinks he might be traumatized from the crash. Then he hires an aged investigator (Bruno Ganz) to verify his identity and seeks out the taxicab driver (Diane Kruger) for help. But when he attempts to disprove Quinn’s impostor role, Neeson’s character quickly discovers something more sinister in the works as goons come to silence his rather loud inquiries.

Based on the novel Out of My Head by Didier Van Cauwelaert, screenwriters Oliver Butcher and Stephen Cornwell miss a major opportunity to inject some much-needed humor and personality into the presentation. A plot so convoluted, as this one turns out to be, requires humor to bond the audience with the hero, rather than leave us questioning the Whys and Hows of the plot (and there are many). Characters and charismatic performances are what audiences remember most with such thrillers, and here the descriptions are thin. Instead, the humorless film proceeds almost as pure exposition, following Neeson’s character as he discovers what happened in this increasingly ridiculous yarn. Twists and turns—and there are one or two clever ones—seem to occur every few minutes as the mystery unfolds, yet the Spanish-born Collet-Serra (Orphan) captures it all with impressive clarity.

Implausible though the plot details may be, it’s enough that Neeson appears onscreen, no matter how poorly the script builds his character. His presence alone makes the material more entertaining than it has any right to be, his heavy brow and imposing tone instantly commanding. Comparisons are, curiously, being made to Taken, although aside from Neeson once again playing a protagonist on a hard-headed mission, there’s little similarity between the two films or performances. That film was an all-out actioner, whereas this one is more about mystery and suspense. That being said, Collet-Serra directs one of the best car chases in recent memory, a sequence that stands out more than any other in the film.

Some of the supporting performances have Neeson’s same effortlessness thanks to the strong casting, such as those filled by Ganz and an appearance by Frank Langella. Their characters hold more weight in their handful of scenes than the others combined. Take the wife as portrayed by Jones—there’s not a moment of emotion in her entire performance, nor even a memorable trait about her. The same can be said for Quinn, whose impostor is little more than a well-dressed thug. Kruger holds her own, however, playing what should have been an alternate love interest. Alas, there’s simply too much intrigue here for the writers to bother with pithy notions of well-drawn characters or romantic subplots.

In a way, the film combines a typical Hitchcockian Wrong Man thriller with elements of Roman Polanski’s Frantic, as both feature a disorientated American struggling to reconnect with his wife via the help of a sexy local. But the filmmakers are blind to the lofty possibilities of this scenario. Polanski (vis-à-vis Hitchcock) knew that the suspense is enhanced when romance, even forbidden romance, becomes part of the stakes. Yet, there’s not a moment of sexual tension between Neeson and Kruger, and the film suffers for it. Along with wanting humor, Unknown’s lacking sense of romance leaves the audience with nothing to root for except the promise that, by the end, Neeson will deliver some knockout blows to the bad guys. For some, that’s enough. Audiences hoping for more will want to seek out some Hitchcock and Polanski to see how it’s done.