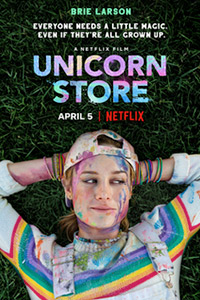 There’s a curious sense of humor that propels Unicorn Store, the directorial debut of Oscar-winning actress Brie Larson that debuted on Netflix last week. Her film, written by Samantha McIntyre, has a quality best compared to Drop Dead Fred, the 1991 comedy in which Phoebe Cates is revisited by her imaginary friend from childhood. Except, Larson’s work is at times darker, more self-serious, and less certain of the message it wants to communicate. It’s easy to admire its oddball sense of humor, as it has a fancifully frantic quality reminiscent of Michel Gondry’s The Science of Sleep (2006) or Be Kind Rewind (2008), but it’s too often inconsistent to fully recommend.

Larson plays Kit, a twentysomething art school dropout whose particular brand of creativity involves fluorescent colors, rainbows, and glitter. She seems highly influenced by the imagery in Care Bears and Strawberry Shortcake cartoons, despite being a decade too young for such franchises. Also, she might suffer from undiagnosed arrested development, as she behaves like an 8-year-old girl who’s still interested in childish things. Watching the film, you’re never quite sure if Kit belongs in an asylum or just suffers from self-infantilization.

Feeling rejected for her childish ways, she moves back in with her parents (Bradley Whitford, Joan Cusack) and resolves to become a grown-up. She gets a job in an office, and while there, she receives a mysterious, glittery invitations to “The Store”—a showy facade in a run-down building. When she goes, she meets a shimmering salesman (Samuel L. Jackson) who promises to give her a unicorn, her favorite childhood animal, if she can ready a loving and responsible home for the creature. Kit is invigorated by the possibility. But preparing for the unicorn ultimately requires her to work out her life issues that, predictably, make her fanciful dream of a unicorn unnecessary.

Larson doesn’t quite capture the whimsy needed to pull off this story, which recalls something like what Terry Gilliam did on The Fisher King (1991). There’s a wild degree of tone-shifting throughout the film that even the most skilled directors couldn’t manage, and Larson isn’t up to the task. It’s far too situated in the real, which makes the more absurd and exaggerated elements of the story feel sort of disturbing. Even so, that very same quality produces a number of hearty laughs, especially after Kit befriends a hardware store worker (Mamoudou Athie) who looks at her life from the outsider’s perspective.

Somewhere in here is a message about following your dreams and pursuing what you like, no matter what the critics or cynics might say. It’s a positive lesson, to be sure. There might also be an acknowledgment that Millennials tend to avoid growing up, but the film hardly censures that notion—quite the opposite. Unicorn Store ultimately rewards Kit’s behavior, and in doing so, never settles on whether young Millennial women should grow up or embrace their inner 8-year-old. Larson seems to suggest that you can have both. It’s an optimistic point of view, but it’s not one reflected by the filmmaker’s ability to balance girlish fantasy and grown-up reality on film.

(Note: This review was originally posted on Patreon and moved to Deep Focus Review in February 2020.)