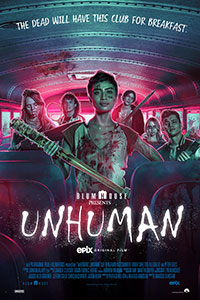 Unhuman combines a zombie horror splatterfest with a coming-of-age teen comedy, about ten years or so after such a concept would have been trendy. Although the twenty-first century started with an inspired resurgence of zombie movies ranging from 28 Days Later (2002) to Shaun of the Dead (2004), overexposure has led to the undead falling out of fashion in recent years. Somewhere between AMC’s The Walking Dead, currently in its final season after twelve years; the show’s various spin-offs with uneven results; and the countless other shows and movies about brain-eaters in the last twenty years, zombies have run their course. That didn’t stop director Marcus Dunstan (a Project Greenlight winner), along with his screenwriting partner Patrick Melton, from offering this playful mix-n-match. But if the setup feels too much like the lovechild of John Hughes and George A. Romero, the movie proves worth a casual viewing thanks to a few well-honed performances and a genuinely surprising plot twist. To be sure, Unhuman is proof that even the most well-worn material can still be effective with the right amount of genre subversion.

The movie’s tagline (“The dead will have this club for breakfast”) says it all. Set in a suburban community that may as well be Shermer, Illinois, the local school is populated by the usual array of sportos, motorheads, geeks, sluts, bloods, wastoids, dweebies, and dickheads. A cross-section of these cliques takes a field trip that descends into conventional zombie chaos. Our hero is Ever, played by Brianne Tju (Amazon’s I Know What You Did Last Summer), a socially awkward teen from a less fortunate home. Alongside her friend Tamra (Ali Gallo), Ever boards a bus with sporty bullies (Uriah Shelton, C.J. LeBlanc) and loners Randal (Benjamin Wadsworth) and Steven (Drew Scheid), plus a representative from every social subset in-between. Overseen by a belligerent teacher (Peter Giles), the trip sets out for an extra-credit wilderness expedition. But on the way there, the bus slams into something that sprays blood on the windshield and causes the driver to swerve down a woodland hill.

All at once, an emergency broadcast directs people to the nearest fallout shelter due to a nationwide chemical attack. Cue the undead biker who bangs on the bus door. The teens panic and the zombie gets some of them. The others race toward an old ramshackle building for shelter. Everyone screams and shouts, and one of them pukes on the camera lens. Dunstan, no stranger to gory effects for the sake of shock (see his 2009 feature, The Collector), adopts the abrasive comedic tone of The Return of the Living Dead (1985). Accordingly, the acting becomes larger than life—both in their comic delivery and their screams—and the visuals match the exaggerated tone. Cinematographer Lyn Moncrief employs herky-jerky camera movements accompanied by whooshing sounds. Editor Andrew Wesman uses prepping-for-battle montages occasionally reminiscent of Sam Raimi’s work, plus an array of split-screen effects, jittery cuts, and Snyder-esque slow-motion for emphasis—effective for heightening tension, less so for creating drama when a thinly drawn character dies. 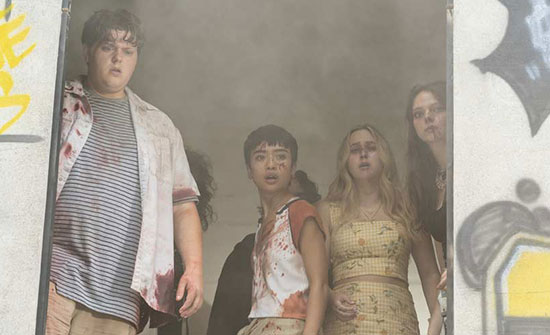 As Unhuman carries on, the survivors realize that the building they’ve chosen seems to be engineered to guide them down a certain path illuminated by ultraviolet lights and eerily familiar mannequins. Although everyone should be in survival mode given the accelerated chaos (“Like World War Z on fucking bath salts!” as one character describes), the teens find time to deal with their hormonal, interpersonal high-school bullshit in the middle of the zombie apocalypse. As a zombie movie, there’s not much going on here. And gradually, the characters learn to stop bickering, discriminating by social stereotypes, and underestimating each other. They even start working together to protect each other from their frenzied attackers, occasionally revealing that there’s more to them than their social standing.

Except—and here’s the twist, so skip over this paragraph if you want to remain unspoiled—it’s not a zombie apocalypse at all. Instead, it’s an elaborate ruse concocted by some bullied lunatics who were inspired by the Scared Straight program, wherein troubled students spent time with convicts as a deterrent for future bad behavior. Using psychedelic drugs and zombie masks, the culprits of Unhuman hope to shatter social boundaries and bring the cliquey teens together, all while teaching them a lesson against bullying. Just when the movie started to feel stale, and I started to check out, the twist turned Unhuman into something different altogether: an active discussion about the lasting consequences of bullying. It’s also the point where the actors (especially Tju, Wadsworth, and Scheid) can finally reveal that there’s more dimension to their characters. However, the transition may have come far too late in the proceedings to justify the conventional first two-thirds. Will the average viewer tired of zombie fare stick around long enough to discover the movie-saving twist? I hope so.

The opening credits describe Unhuman as an “Afterschool Special” presented by Blumhouse Television and EPIX, winking at the ABC series that ran from 1972 to 1997. If the reference is missed by younger viewers unfamiliar with the original show, the moral of the story may still resonate. By the end, the movie features several anti-bullying speeches, leaving the lessons unmistakable. Here’s a reality check, reminding teen and adult viewers that the misery of high school stays with you and might even materialize later in prolonged anger, anxiety, and sadness. If you’re a teen, try to be decent to your fellow students; and if you’re an adult, get the help you need to work through any lingering issues. Unfortunately, the curious blend of “The More You Know” message and bloody mayhem doesn’t congeal until the last half-hour, making the second act feel aimless and conventional. Still, if you can endure the middle section, Unhuman, which debuts on VOD, justifies its 91-minute runtime with some unexpected character growth and dimension before the finish.