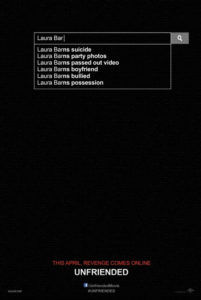 Has humanity become so integrated with social media that when we die, our ghosts will haunt cyberspace? That’s the question in Unfriended, a familiar mash-up of Paranormal Activity and I Know What You Did Last Summer, where a vengeful supernatural force taunts a group of teens on Skype and other platforms. Originally titled “Cybernatural,” director Levan Gabriadze’s horror flick premiered in 2014 at the Fantasia genre film festival, and Universal Studios purchased the rights before renaming it. Meant as an attack on cyberbullying, this body count movie loses any hope of a meaningful social commentary just around the time a possessed blender frappés a teen. Some may give it credit for trying something new with the genre, but the novel concept is just a superficial gimmick slapped onto a familiar scenario and shoddy script.

The action takes place on the MacBook screen of high-schooler Blaire (Shelley Hennig), and consists of watching her activities on Skype, Facebook, YouTube, Google, etc. The audience watches as her cursor moves about, selecting this or that feature, such as setting the mood of a given scene by picking a song on Pandora. Joining her via video chats and instant messages are several friends, including her boyfriend Mitch (Moses Jacob Storm), their slutty pal Jess (Renee Olstead), the aggressive rich-boy Adam (Will Peltz), and their unlikely friend Ken (Jacob Wysocki), a chubby computer wiz. As they blather on about nothing at all (“You guyz, like seriously!”), they realize their chat has been intruded upon by an anonymous hacker claiming to be Laura Barns, a former classmate who committed suicide after a nasty cyberbullying campaign.

With seemingly limitless control over their computers and various profiles, the hacker reveals incriminating secrets, pictures, and betrayals among the group of so-called friends. They try hanging up and calling each other back, but Laura’s profile remains open and connected. While they scramble to stop the digital intruder to no avail, the teens make a leap when they question whether the hacker is actually Laura returned from beyond the grave. Blaire plants the suspicion by visiting a forum dedicated to web-based spirits, which explains that online apparitions can take control of a user’s tech, mind, and body. Only oversexed and borderline alcoholic teens could find something in a random forum about ghosts to be cause for legitimate concern.

Sure enough, the teens start killing themselves one by one. But these are nasty, obnoxious teens—none of them redeemable, nor even particularly likable. Worse, the presentation doesn’t even allow us to enjoy their deserved deaths. Indeed, their computers seem to have a lousy connection. As they shout at one another and talk over each other, or die in a Skype window, viewers are subject to intermittent audio and pixilated video freeze-ups. We attempt to make out what’s happening, and who’s saying what to whom, but we always seem to be waiting for their delayed reactions. It’s an aggravating experience, like every conference call or webcast you’ve attended where there’s a momentary delay.

Gabriadze and his screenwriter Nelson Greaves rely on their presentation to involve their audience. Our familiarity with web sounds and notification prompts helps bond us to the experience; however, the concept and execution cannot help but put the material at a distance. Moreover, the delivery is inconsistent with the storytelling. More than once, Blaire steps away from the group to have a private chat or watch a video, and then all at once, the momentum with the other members of the group halts, as if they’re just waiting for her to return for their part in the story to continue. Unfriended is akin to watching someone else surf the web or talk to their friends online. What could be more boring? That these characters are uninteresting, often pixilated, and experience computer performance delays only make it worse. Waiting for a busy pinwheel to stop spinning at home is maddening enough. Unfriended wants us to pay for that experience with the cost of a movie ticket.