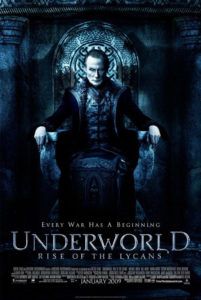 After two entries in the Underworld franchise, producers had nowhere to go but backward into prequel territory to complete Underworld: Rise of the Lycans, a pointless-if-entertaining film that improves on the basic conflict of the series by simplifying it. It’s pointless because we already know how it will end since the first two movies describe the events of this one in detailed flashbacks. But it’s entertaining because the story isn’t muddled by Goth trendy-ness, slow-motion bullets, and bad rock music.

Hundreds of years before the silly and hyper-stylized events in Underworld and Underworld: Evolution, before Selene (Kate Beckinsale) broke free of the vampire clan to bed a dreamy hybrid vampire-werewolf (Scott Speedman), a medieval kingdom flourished because on high sat Viktor (Bill Nighy), at least during the nighttime hours. Bloodsucker that he is, Viktor gets the bright idea to breed lycans as slaves, using his werewolf brother William’s seed as stock. Soon his castle walls are guarded by a slave race of beasties during the day, allowing the vamps to sleep soundly. The first of William’s children is Lucian (Michael Sheen), who is stronger and faster than those like him, because if he wasn’t he wouldn’t be so cool, and if he wasn’t so cool, he wouldn’t be the hero. Well, if you recall, Lucian dies in Underworld, so don’t get too excited when he eventually decides to lead a rebellion against his vampire masters. And of course there’s good reason to revolt—Lucian loves Sonja (Rhona Mitra, from Doomsday), Viktor’s daughter. We already know her fate too, and it’s none too pleasant.

What we have here is your basic melodrama, complete with a corrupt and flawed aristocrat family trying to suppress the little guy, who eventually proves that money and power can be brought down like any other establishment. There’s love, inner family conflict, soapy dialogue, and plenty of tragedy. Granted, there are also decapitations galore and CGI creatures howling in the moonlight, which won’t be found in your standard Douglas Sirk film, but the fundamental melodramatic arc is present. At least it’s more involving, more aligned with an audience’s primary sympathies than its morally ambiguous forerunners.

Unfortunately, there are plenty of nods to those forerunners, including some stolen narration and a flash-forward scene or two. Don’t bother counting how many times the movie seems to say, Remember when this happened in the first movie? Well, this is why! Telling its origin story without a shred of surprise, we’re even subjected to a moment where Lucian is asked if the battle is over and he replies, “No, this is just beginning.” That cringe-inducing moment is followed by the first scene from Underworld, replayed for us just in case we wanted to feel self-loathing for now wasting about six hours of our lives on this second-rate franchise.

Nevertheless, audiences can relish in the fine performances from two of Britain’s best contemporary actors. Nighy’s zealous and nervy acting as Viktor, the pale leader of the overdressed vampire coven, gives the character the same conflicted villain appeal as his Davy Jones in the latter two Pirates of the Caribbean films. Sheen, meanwhile, might be accused of split personalities, as his talent seems divided into two distinct categories: He appears regularly in lauded roles for top-notch productions, like playing David Frost in Frost/Nixon and Tony Blair in Stephen Frears’ The Deal and The Queen. But then he’s the genre figure of sloppy junk like Timeline and the Underworld franchise. As Lucian he elevates the role with some fierce yelling, and he betters the film’s formulaic dialogue with his convincing performance. But even the presence of these credible actors can’t save us from the movie’s reliance on building up to the events in the previous entries.

Though produced and written by the same people as the others, this film was directed by Patrick Tatopoulos, as opposed to Len Wiseman (Live Free or Die Hard) who helmed the first two. Shot through the same dark blue filter, the visuals are gloomy and barely lit by fire. Only when blood splatters across the screen does the color palette change. Tatopoulos avoids self-conscious choices like pervasive slow-motion and a superfluous industrial score in exchange for an enjoyably straightforward direction. Where Rise of the Lycans succeeds best is in the basics of the revolt story, which avoids complex power plays, backstabbing, and centuries-old flashbacks of things long-since-passed. Instead, the plot offers an efficient yarn about an uprising that, though we know the grim outcome, makes for a watchable diversion, even if it leaves a bad taste in your mouth.