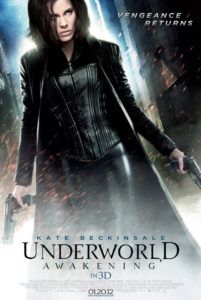 Underworld: Awakening makes the fourth entry in Screen Gems’ bafflingly successful franchise, and it’s easily the worst of the lot. Unsure where to go after Rise of the Lycans entered prequel territory, the filmmakers push the series into a future where the warring vampire and werewolf factions are hunted by humanity. This over-plotted effort involves various sides trying to destroy each other as Kate Beckinsale, who returns after sitting out the last one, struts about the screen in skin-tight vinyl while firing a gun in each hand. And since thesps Bill Nighy and Michael Sheen—who both had significant roles in the first three—made a smart move and opted not to return for this go-round, there’s little reason for anyone outside of blindly devoted fans to seek out this drivel.

The movie opens like a television show, with a preface that’s preceded by an unnecessary recap of what’s happened in the series thus far. (For those counting, that means two prologues.) Beckinsale’s “death dealer” Selene plays narrator and all but announces “Previously on Underworld” as she summarizes the events of the original movies, beginning with the first shot from the original Underworld with Selene on her perch—an image this franchise won’t let us forget; they’ve referenced it with a flashback in every sequel so far. Whereas the last film took place in the thirteenth century, here the story proceeds twelve years in the future. In doing this, the filmmakers make it clear that they’re re-launching their own franchise in the same way Resident Evil: Afterlife has done, all in hopes of hooking a new, younger audience into their never-ending series. As such, they introduce new characters (none of them interesting) and dramatically rearrange the setting.

News reports tell us that humans have discovered a mass-monster-infection spreading throughout the human populace, which leaves its victims turned into vampires and werewolves. Governmental forces align and together wipe out the majority of vamp covens and Lycan clans, with only a few survivors left to hide underground. Selene attempts to escape with her werewolf-vampire hybrid lover, Michael (Scott Speedman), but they’re suddenly attacked and frozen Demolition Man-style. When Selene wakes, she’s been unfrozen by a little girl, Eve (India Eisley), who is a hybrid like Michael, but was engineered in a lab for some nefarious purpose by the mad Dr. Lane (Stephen Rea, slumming it). For all intents and purposes, Michael is dead, but he’s not really dead. Meanwhile, Selene adopts Eve as her own, allowing for a silly scene or two where Beckinsale, in a performance devoid of soul, grows teary-eyed behind those pale blue color contact lenses.

Disoriented and no longer in her own time, Selene hopes to make sense of out of the plot, and she has just as much trouble connecting the dots as the audience does: at the same time she tries to reconnect with her vamp friends, she fights off the human threat, avoids a band of mutant under-dweller Lycans, and finds a human comrade  in Det. Sebastian (Michael Ealy). None of these elements come together in a satisfying way; rather, they converge in a parking garage battle sequence, which is just as underwhelming as it sounds. With four screenplay credits and two story credits making a grand total of six writers, the plot is convoluted at best and certainly overcomplicated. Conflicts are resolved only when a badly rendered CGI creature—a nine-foot-tall werewolf thing that looks lifted from Van Helsing—appears onscreen, causes all sorts of trouble, but also evokes unintentional laughter. Whenever it’s around, lights flicker with a strobe effect, even in underground dwellings. For the life of me, I can’t explain how or why.

It might be conceivable that the franchise’s previous director, Len Wiseman, who’s a producer here, hired on the two co-directors Måns Mårlind and Björn Stein because there was so much plot to contend with. But the extra body behind the camera seems to have confused matters more. Mårlind and Stein show their complete lack of style and originality in trying to recreate or improve upon what Wiseman had done on the earlier movies. As a result, Awakening looks very similar to the previous entries, complete with blue-saturated visuals and characters garbed in Euro-trash costumes. But the further downer of a 3D presentation, which darkens the already poorly lit scenes, makes the viewing experience difficult to endure. Add to this a plot that drags even in the movie’s 88-minute runtime, and you have yourself a franchise-killer. Let’s just hope it stays dead.