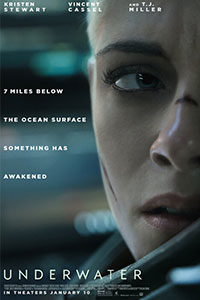 “We drilled to the bottom of the ocean,” reflects a character in Underwater, “and we took too much. Now she’s taking back.” These lines, which sound like a marketing department wrote them, synopsize a familiar subgenre wherein ocean explorers discover a sea monster at unfathomable depths, and with it, they unleash sci-fi terror. Underwater follows in the tradition started with Jules Verne’s classic Twenty Thousand Leagues Under the Sea and carried on by countless other examples, most of them released in 1989 strangely enough: DeepStar Six, a C-grade creature-feature about a giant sea scorpion that attacks the Navy’s undersea base; Leviathan, an entertaining yarn about a deep-sea organism that mutates its prey into grotesque aquatic creatures; and the granddaddy of all seafaring thrillers, James Cameron’s The Abyss, about drillers who uncover another form of intelligent life inside the Cayman Trough. Each of them implants a justifiable fear about what lurks at the bottom of the ocean. Oddly enough, each of them borrows elements from Alien (1979), sharing its roster of relatable blue-collar workers, use of claustrophobia, and fear of unearthly monsters.

Underwater has much in common with Alien as well, not that the screenplay by Brian Duffield and Adam Cozad gives the viewer much time to recognize the similarities. From the initial moments until the final few minutes, the movie plunges its audience into an ever-developing series of disasters and scares whose momentum doesn’t let up until the final, underwhelming frames. It’s as though director William Eubank resolved to start his movie in the second act, just as things were getting interesting. After a brief introduction to our protagonist, Norah (Kristen Stewart), the computer technician on a drilling rig in the Mariana Trench, seven miles beneath the surface, things begin to fall apart. There’s no time for lengthy exposition or backstories. We’ll pick that up along the way. For now, an apparent earthquake has rocked the station; the walls collapse around Norah, and she must escape before her entire section of the massive base implodes.

If a crumbling station at the bottom of the ocean, complete with desperate scenes in which survivors must push themselves through narrow, dripping passages, wasn’t enough to alert your inner claustrophobic, then perhaps a countdown to an explosion will. The survivors can’t wait for help because the station’s power core may rupture at any moment, requiring Norah and the other survivors—the noble captain (Vincent Cassel), the comic relief (T.J. Miller), the couple (John Gallagher Jr. and Jessica Henwick), and the disposable nice guy (Mamoudou Athie)—to strap on bulky underwater suits and walk a mile on the ocean floor. Their destination, a nearby site equipped with escape pods. But their perilous retreat from a crumbling station transitions from a desperate race against time to a frantic escape from sea monsters unleashed by drilling—hideous things with teeth and tentacles that have been living dormant in a warm pocket beneath the ancient seabed.

What works best about Underwater is the unyielding pace that subjects our survivors to one obstruction after another, both in the form of a crumbling structure and monsters hungry for humans. The pacing recalls another ocean-bound disaster movie, the underrated Deep Rising (1998), about slimy creatures that emerge from the briny deep to attack a cruise liner, and its hero who repeatedly asks “Now what?!” with each new setback. Miller’s character has a few lines like that here, but mostly Eubank preserves the tension without humor. Stewart’s nervy performance as the resident Ellen Ripley further enhances our experience. She’s a performer capable of great strength and vulnerability, and her committed physical performance legitimizes the otherwise silly material. The whole cast is better than expected for this sort of thing, and along with the convincing special FX, the actors manage to make us forget that we’re watching a January horror movie—a designation that usually spells doom.

It’s not all so immersive and better-than-expected. News clipping montages over the opening and closing credits provide unnecessary exposition, whereas the characters’ lack of intricate backstories actually helps the movie succeed. Likewise, the screenwriters employ a tired device of bookend narration, which is easily forgotten on the front end but sours the terrifying, Lovecraftian finale. This suddenly-serious voiceover only accentuates Underwater’s overly convenient climax, and it might even derail the visceral, lasting impression of the movie for some. Still, Eubank, cinematographer Bojan Bazelli, and a trio of editors maintain a breakneck pace and competent visual presentation that makes the most of the deep ocean’s pitch-blackness and the creatures’ eerie, reflecting eyes lurking just beyond the flashlight’s reach. Though Underwater barely makes time for character development, the purely situational nature of the movie and distinct actors, Stewart above all, keep us engaged for 90 minutes of B-movie pleasure.