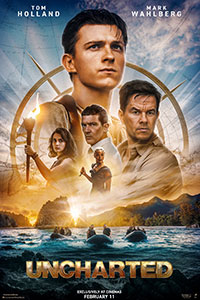 Even when based on a video game, naming an adventure movie Uncharted is a bold move. There’s not much left to discover in the genre of historically inclined adventurers who face impossible danger to uncover buried treasure. But that doesn’t mean a journey into familiar surroundings can’t still be fun. For instance, I admired the reboot of Tomb Raider from 2018 starring Alicia Vikander and still hope for a follow-up, even though the Angelina Jolie versions remain an embarrassment. As for Naughty Dog’s Uncharted game franchise and its various sequels, they were bound to become Hollywood movies. Similar to the Lara Croft games, they represent another in a long line of Indiana Jones knock-offs that blend archeology and mythology with globe-trotting exploits and the occasional supernatural force. But they’re exciting games, usually well-written, epic in scale, and unabashedly cinematic. So it goes without saying that Hollywood would want to turn that intellectual property into a major motion picture.

However cynical one could become toward the prospect of another breed of Romancing the Stone (1984), The Goonies (1985), or National Treasure (2004), Uncharted defies all odds, despite its gaming origins. Indeed, the history of movies based on video games is a sad chronicle of Uwe Boll disasters, Milla Jovovich starrers, and animated blue hedgehogs. Only last year did two movies, Werewolves Within and Resident Evil: Welcome to Raccoon City, manage to upend expectations and deliver on their potential. With few exceptions, video game source material usually results in a mess, disappointing fans and underwhelming the casual viewer. But Uncharted is a movie that understands the link between the franchise’s movie and game origins—all the more impressive given how long producer Avi Arad and Sony have been trying to get this made. A half-dozen directors, ranging from David O. Russell to Shawn Levy, tried to nail down the adaptation. The job finally landed in Ruben Fleischer’s hands, and the director of Zombieland (2009) and Venom (2018) delivers serviceable escapism.

After playing through the Uncharted games over the years, I expected to see cutthroat treasure seekers, chummy banter, underground tombs, elaborate puzzles, a loose sense of history, double-crosses, some parkour, and high-flying action. And the movie makes good on all fronts to varying degrees. Tom Holland plays the young Nathan Drake, who, years earlier, was separated from his brother Sam (Rudy Pankow). Orphans both, the Drake brothers hail from legendary pirate Sir Francis Drake, so adventure is in their blood. While on his own, Nathan, serving as a bartender straight out of Cocktail (1988), is recruited by his long-lost brother’s former partner, the duplicitous Sully (Mark Wahlberg). They’re both after a treasure lost since Magellan’s expedition in the sixteenth century, putting them on the hunt for two golden keys and a map that leads to billions in gold. The trail takes our heroes from the US to Barcelona to the Philippines. And from the midair physics-defying opener to the swashbuckling climax, the movie doesn’t disappoint in its video game logistics, which are only slightly more cartoonish than the average Hollywood blockbuster. 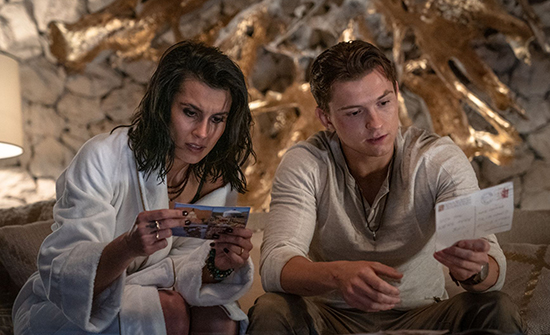 Investigating priceless antiquities with all the subtlety of a sledgehammer, our heroes have enough star power to overcome their miscasting. Wahlberg looks about 10-20 years too young for the usually grisled Sully, and Holland’s boyish appearance, while fodder for the pair’s banter, underlines the movie’s origin story quality (not to mention Sony wanting to invest in their Spider-Man star). There’s even a conspicuous montage of Holland exercising, which establishes that he’s somewhat more buff than Peter Parker and thus capable of Nathan Drake’s acrobatics—and without the help of a radioactive spider. Of course, he’ll need every well-honed muscle against the resident villain Santiago Moncada, played by Antonio Banderas. The latter delivers each line from the back of his throat and seems to enjoy playing the heavy. The supporting cast of characters includes Braddock (Tati Gabrielle), Moncada’s ruthless right hand, and competing fortune hunter Chloe Frazer (Sophia Ali). And while Gabrielle and Ali steal the show, Holland and Wahlberg fill their roles sufficiently.

On visual terms, Fleischer delivers a clear-eyed production. Cinematographer Chung-hoon Chung (a regular collaborator with South Korean master Park Chan-wook) and the editors render the action with a coherence that has become less and less common in Hollywood tentpoles. It doesn’t match the visual luster of Steven Spielberg’s Raiders of the Lost Ark (1980) nor the slapdash lows of Paul W.S. Anderson’s The Three Musketeers (2011), but it gets the job done. The movie’s scope feels relatively grounded for the first two-thirds, rooted in unflashy set pieces, such as an auction house and a tomb filled with spider webs and booby traps. Then the silly final act takes over, complete with a CGI chase between two helicopters transporting Renaissance-era ships filled with gold. But that’s just the sort of thing the viewer should expect from the Uncharted series.

As a franchise fan, I found Uncharted to be a mostly fun and faithful movie, minus my quibbles about the somewhat miscast leads. Mind you, my enjoyment stems from lowered expectations and a better-than-average video game adaptation. The movie’s moderate pleasures won’t invite fervent rewatches or convert those unfamiliar with the source material—unless they’re rampant Holland or Wahlberg fans—but it keeps the viewer rapt in the unfolding plot. At least one of the twists and turns along the way brought a genuine shock, while the inorganic cameo by Nolan North (the game’s mo-cap actor who plays Nathan Drake) may seem confounding to the unfamiliar. Even though I had more of an emotional response to the last game, Uncharted 4: A Thief’s End from 2016, and I’d rather be playing the game, Sony’s production kept my attention for two hours. That’s more than I can say for most movies based on video games.