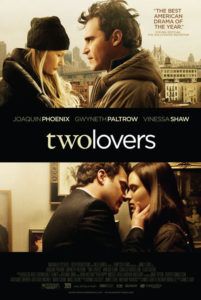 What is it about damaged goods that are so appealing? Some people just gravitate toward disaster, I suppose. Whether their inclinations are based on self-destructive instinct or cruel twists of fate, their decisions are subjective. But certainly there are those select few individuals—everybody knows at least one—who recurrently find themselves falling for the wrong person. Such romance yarns are formula, beaten into the ground even: Person A loves Person B, but Person B does not love Person A, and then there’s a Person C who’s perfect for Person A, but Person A isn’t interested in Person C.

James Gray’s new film Two Lovers follows this very structure, encapsulating it within a dreary casing of quiet characters, somber tone, and grave temperament. This is Gray’s third collaboration with actor Joaquin Phoenix after The Yards and We Own the Night, and much of his style carries over. By that I mean his formal choices are dark and brooding, but harbor modest substance. Viewers might be inclined to swallow it based on Gray’s technical control, except few of the characters presented in his film are engaging on any level except pity.

Set in Gray’s common filmic territory of Brighton Beach, Brooklyn, his Russian-Jewish characters are lucky they have wonderful actors lending them depth, because the roles themselves require someone to breathe life into them. Phoenix plays the insecure Leonard Kraditor, a manchild living with his parents Reuben and Ruth (Moni Moshonov and Isabella Rossellini). His former fiancée was forced to leave him when they discovered their potential children would be at great risk of disease, and so Leonard recovers from multiple subsequent suicide attempts under the watchful eye of mom and dad.

The first scene features Leonard jumping into Sheepshead Bay, and then immediately calling for help. In his state, his parents are desperate to keep him safe, and given the nature of his melancholy, they set him up with a friend’s daughter Sandra (Vinessa Shaw)—partly because she’s an available young woman of Leonard’s age, and partly because her father and Reuben are looking to merge their family businesses. Easygoing and attractive, Sandra makes an effortless romance for Leonard, awkward though he may be.

Meanwhile, troubled neighbor Michelle (Gwyneth Paltrow) catches Leonard’s gaze one day in the hallways of their apartment building. They quickly become friends, though plainly she’s not someone to pursue. In the bed of a married lover (Elias Koteas), semi-recovering from a nasty addiction to drugs, and emotionally broken, she’s the opposite of the stability Leonard needs. Nevertheless he follows her and pretends to meet her by chance, projecting great feelings onto a woman that has her own issues to resolve. But like the man said, the grass is always greener on the other side.

Unfortunately, which woman Leonard ultimately chooses has little meaning, since the film heralds a message about the defeatist momentum of desire. Not that his choice would matter anyway, considering both women are shown as pathetic or just plain strange for falling in love with Leonard, a nerdy, sorrowful, and quite useless wannabe photographer. Gray gives us nothing to cling to emotionally, and so he leaves the audience floating in the indifference of open space, hoping for something worthwhile to happen that might make us care. And aside from some fine presence-based performances from the entire cast, rarely is the audience involved.

However much the critics (specifically those at Cannes) praise Gray for translating his cinematic New Yorker identity onto the screen so clearly, however frequently they compare the narrative approach of his small oeuvre to that of Martin Scorsese’s, the emotional detachment of his work speaks volumes over his evident presence behind the camera. Unlike Scorsese, Gray’s vision of New York comes undersold by his muted palette of blues and airs of aloof sentiment. His isolating treatment of his characters and unappetizing tone serve only to distance his audience from the material… And that doesn’t sound like Scorsese to me.