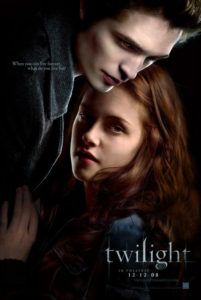 Bound to Victorian classicism, vampires surrender their appeal in a contemporary setting. They’re no longer their romantic or tragic selves in present-day clothing, and their alluring qualities dissipate when they start dishing out pop-culture references. Modernized vampires never fare well on film. Usually clad in lots of black or lots of white, they parade around with their pale skin, soaked in hair product, a Zoolander-like gaze fixed on their mug, looking like rejects from the latest Calvin Klein ad. They lack ambiance and atmosphere—everything that made Dracula so bewitching. Anne Rice learned the hard way that placing vampires in today’s setting empties them of their effectiveness.  Then she became a born-again Christian. Twilight contains a pack of vampires posing as a family, most of them fitting the above description. Based on the novel by Stephenie Meyer, who has not yet renounced her horror-themed work in favor of religion, the film luckily treats its modern blood-suckers as supplementary to the convincing central romance.

The story centers on Bella (Kristen Stewart), an intelligent and tangible teenage girl no doubt named after Bela Lugosi (And if you don’t know who Bela Lugosi is, why are you watching a vampire movie?). She moves to Washington state to live with her affable-but-quiet father (Billy Burke), and there she meets Edward Cullen (Robert Pattinson). At their first encounter, Edward represses what appears to be a gag-reflex, but later, we learn he struggled to suppress his bloodlust, which, of course, forecasts his love. Edward’s brand of vampirism is fiction’s least distressing (or interesting) sort. He lives in quiet anonymity, but plenty of threats exist in the sleepy town of Forks. For instance, a rival vamp gang is murdering local folk for chow, threatening the secrecy of Edward’s group. Elsewhere, lycanthropic Native Americans raise their eyebrows at Edward’s kind, pointing toward trouble on the horizon.

None of this has much to do with Bella and Edward finally embracing one another, however. That’s the story we’re interested in, since the characters are believable and empathetic. Stewart has an immediate onscreen magnetism that has followed her throughout her career. Pattinson gives appropriately intense glares, some penetrating, some unintentionally humorous. Bella and Edward’s romance has vast potential, but it’s squandered by Meyer’s gimmicky horror device.

The film has been made into fodder for teenage girls, and though the potential to elevate the material for a wider audience exists, it wasn’t explored. Meyer’s vamps are the girliest they could be: They’re fangless vegetarians, who, instead of burning up in sunlight, sparkle as if dusted with glitter. It doesn’t hurt that they look like models, either. And yeah, so like, have you seen how cute Robert Pattinson is? Oh my god, like seriously. I needed to chillax after seeing the movie because he was like so hot! I mean, like, everybody’s talking about him. And when he like, looks at Bella, his eyes are like totally dreamy. Totally.

Admittedly, I have not read Meyer’s novels, though everyone says I just have to. What bothers me most about films like Twilight is when fans will tell me, “You really have to read the book to get the movie.” So let me get this straight: In order to appreciate a movie, I have to read the book first? Doesn’t that defeat the purpose of the movie? Shouldn’t the book’s appeal be communicated by the movie without requiring audiences to emotionally recollect the same story on the printed page? Regardless of whether I’ve read the book or not, the movie should convey its characters and storyline within its running time. If it fails to capture those qualities, the adaptation is unsuccessful.

Though director Catherine Hardwicke’s movie shouldn’t be labeled unsuccessful, it’s certainly uneven. Scenes between Stewart and Pattinson include undeniable chemistry; the performers are superbly cast, and their sexual tension shakily visible. Meanwhile, the vampire effects and subplots about clan wars are contrived, more attuned to the triteness of the Blade or Underworld franchises. And by the allusions made throughout the film, that’s the direction this franchise is headed—another vampire vs. werewolf franchise. Perhaps Interview with the Vampire, Buffy the Vampire Slayer, and those like them have exhausted the genre, making any attempt at “freshness” or revival redundant.