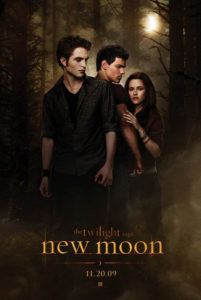 In the opening scenes of The Twilight Saga: New Moon, none-too-subtle hints to Romeo and Juliet foreshadow the movie’s romantic angst. The story involves the separation of the human Bella (Kristen Stewart) from and her veggie-vamp boyfriend Edward (Robert Pattinson), their mutual woe while apart, and contains themes of suicide. Some might think this Shakespearian parallel is clever, mostly the teen girls in the audience who sigh in ecstasy whenever Pattinson appears onscreen. But this pretentious reference only infers how desperately the movie uses every power in its bag of emo tricks to seem meaningful, though it isn’t.

The second book-to-film adaptation of the popular Stephenie Meyer novels, New Moon comes in the same paper-thin treatment as its predecessor. This is a movie that fans will defend by saying, “But you have to read the book to really appreciate it.” Bad argument. No movie should require a read-along novel to make the experience complete. The characters should come alive through the actors and the script and the direction, not from our memory of them in the books. Incidentally, I have never read the books and have no intention of ever doing so. Anne Rice filled my lifelong quota of vampire novels. But I’ve been told the movie takes some considerable liberties with the book’s plot to include more of everyone’s favorite heartthrob, Pattinson.

Abandoned by Edward because he claims they weren’t meant to be, Bella, who still lives with her father Charlie (Billy Burke), is left to continue her teenage life. She takes to self-destructive behavior, though she doesn’t do anything realistic, like drinking or taking drugs—she cliff-dives and rides around town on a dirtbike, because that’s the only way she feels close to Edward. But mostly she stands around and scowls. That’s the favorite pastime of everyone in this movie—loafing and droning about their problems, and looking stylish in the process. Maybe that’s why Charlie is my favorite character, because he’s the only one not depressed enough to spend his days pouting and looking like a reject from “Goth Talk”. It’s funny when you consider that these are just teenagers. Sure, Edward is more than 100 years old, but he’s been pretending to be a teenager the entire time. They all behave so solemnly, not a wink of humor between them. Maybe being humorless and inexpressive is a side-effect of being undead. So what’s Bella’s excuse?

Meanwhile, moving in to mark his territory, Bella’s now-buff Native American friend Jake (Taylor Lautner) confesses his love for her by frequently appearing with his shirt off. It’s always raining, and they’re in the chilly state of Washington, but Jake is a werewolf (it’s not a spoiler if it’s in the trailer), so cold doesn’t penetrate him. Plus, the rain glistens on his six-pack, which can’t hurt your chances when you’re trying to woo someone. Anyway, Jake and his clan of lycanthropes are hunted by locals who think they’re killer wild animals, while he also tries to defend Bella from the town’s band of blood-sucking vampires. So now Bella becomes the sole human to know the secret of yet another pack of monsters. Eventually, there’s a showdown between Jake and Edward for Bella’s hand. Can you guess who she chooses?

They are about five minutes of the movie that are entertaining and well-acted, and those are the scenes containing the Volturi, the vampire equivalent of the Vatican. Michael Sheen, whose career mixes roles in The Queen and Frost/Nixon with appearances in the Underworld movies, plays the vampire leader Aro. When Edward hears of Bella’s behavior and learns that she may be dead, he plans to expose himself to the world and earn a death sentence from Aro, because he’s just that depressed. The Volturi coven is even paler and more inexpressive than the Cullen family, if that’s possible. But the actors therein are much better; besides Sheen, Dakota Fanning makes an appearance as the cruel vamp Jane.

Catherine Hardwicke, director of Twilight, was blamed for a poor translation by fans of the books, so her replacement, The Golden Compass helmer Chris Weitz, comes as something of a relief. The biggest improvement between the films is the creature action. Hardwicke seemed incapable of making super-speedy vampire running and climbing look believable, whereas Weitz improves those errors, barely. Still, watching werewolves and vamps do battle in computer-animated fight sequences is boring, especially when the animation is just so-so. At least the Underworld series, another franchise dedicated to the world of vampires vs. werewolves, used gun battles to avoid CGI-ing their entire movie.

New Moon misses the mark like its predecessor, largely because the monster aspects of the story are the least interesting part, even though they play such a significant role. At the center is an interesting romance, even if it is adolescent and preoccupied with surfaces (namely chiseled abs and ever-perfect slacker hair). But the tone remains so serious and self-important that identifying with these characters, or perhaps elevating them to the level of Shakespeare, is a joke. My criticisms, I realize, will do little to influence the crowds who will be attending this movie and defending it’s every flaw. The target audience has read the books and they probably all have Robert Pattinson posters on their walls. If that’s what it takes to appreciate the Twilight series, understanding its popularity is something that will continue to elude me.