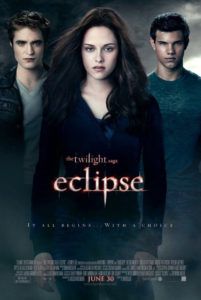 The human-vampire-werewolf love triangle of author Stephenie Meyer’s Twilight book series continues in movie form with Eclipse, a sequel that marginally improves upon the unreserved awfulness of its immediate predecessor, New Moon, but doesn’t quite match the watchable mediocrity of the saga’s first entry, Twilight. Through the course of the movie, what you may have suspected all along becomes apparent, that this melodrama of monsters doubles as a metaphor about the characters’ sometimes supernatural ability to control their sexual desires. The rest of the plot is just filler.

The filler this time around involves Victoria (originally played by Rachelle Lefevre, here replaced by Bryce Dallas Howard), the red-headed vampiress whose mate was killed at the end of the first film. She’s determined to get revenge on Bella (Kristen Stewart) and the vampire clan the Cullens. So she dupes vamp lackey Riley (Xavier Samuel) into building an army of savage “newborn” vampires to exact her retribution. But the Cullens opt to make a pact with the local Native American shape-shifting werewolves to fend off the bloodsucking army’s attack. On the sidelines, the Volturi, the gothic vampire police, seem to have silently approved (by vampire law) of Victoria’s criminal actions, if only to rid themselves of the unconventional relationship between human Bella and vampire Edward Cullen (Robert Pattinson).

Meanwhile, Bella finds herself in-between the ever-shirtless werewolf Jacob (Taylor Lautner) and the ever-emotional Edward. Bella wants to “go all the way” with Edward, but Edward wants to wait until after they’re married. Jacob wants to express his love for Bella, but she claims she doesn’t like-like Jacob, she only likes him, you know, as a friend. Then, on a cold night when all three are forced to be together in a tent, Bella is cold. Edward can’t warm her because his undead body has no life. But Jacob can warm her, “Because I’m hotter,” he explains, which invites giddy laughter from every female in the audience cheering for “Team Jacob”. The next morning, she invites Jacob to plant one on her lips, confirming our suspicions that Bella wants to tempt the boys around her (at least, those who happen to be monsters).

Strip away all talk of Volturi law and all the detail-ridden lore involving the rules of vampire and lycanthrope societies. Ignore the pointless ploys of the plot building up to the climax’s shoddy looking battle scenes. If you consider the roots of the story—of Bella wanting to become a vampire but Edward resisting her, of Bella wanting to make love but Edward wanting to wait until they’re married, of Bella coming ever-so-close to sex with either Edward or Jacob—there’s a worthwhile morality tale about abstinence at the core of Meyer’s books and hence these movies. Do the teenage Twihards realize this, or are they flocking to theaters in hordes just to see Taylor Lautner with his shirt off and Robert Pattison act too-cool-for-school? If by chance the Twihards are picking up on this undercurrent, maybe the Twilight series is helping to cut down on teen pregnancies. If not, maybe the opposite is true and this movie might serve as a filmic aphrodisiac.

Whatever its moral influence on moviegoers behind closed doors or under the sheets, there’s no debating that the teenage audience had made this series a wild success, enough to assure the studio doesn’t miss an opportunity to strike while the iron’s hot. In other words, since the breakout blockbuster Twilight, Summit Entertainment has made sure the sequels’ productions commence quickly, so as not to lose their target audience (before they outgrow this brand of teen romance). Released one-per-year, the movies are produced so rapidly that the filmmakers have barely had a chance to develop solid scripts or improve upon the franchise’s notably substandard computer special effects. And the evidence of the rushed production is apparent up there on the screen in nearly every moment.

Director David Slade returns to vampire territory after 30 Days of Night, which contained some nasty vampires who supplied oodles of gore. Of course, given Eclipse’s PG-13 rating, there’s no horrific bloodshed in the movie, although two or three vamps lose their heads or various limbs. Not to worry; thanks to Meyer’s simultaneous toning-down and dolling-up of the vampire legend, though several bloodsuckers are decapitated, their heads are removed to reveal a (ridiculous) diamond-encrusted center. Meanwhile, the slapdash werewolf animation from New Moon hasn’t improved any here, neither has the blurry, absurd looking vampire sprinting that is sure to generate chuckles amid moviegoers. Had the talented Slade been given more than seven months to complete this film (New Moon was just released in November 2009), perhaps the outcome would have been superior.

The criticisms in this review, however, will hold little bearing to the books’ fans, a mass of apologists willing to forgive every fault of the movies in favor of their own fandom. Virgins to the material certainly won’t find themselves dedicated to any of the characters by this sequel alone. And for the rest of us, Eclipse contains more of the admittedly engaging love story that so easily drew audiences in with Twilight, yet it meanders about by building on the unnecessary mythos of the absurdly constructed vampire-werewolf world. But if the filmmakers only took the time to breathe in-between sequels, and perhaps wrote a script that smartens up Meyer’s wobbly writing, maybe the future entries in this franchise could be more than merely shallow monster movies posing as love stories, but rather affecting love stories with monster elements—which is what Meyer no doubt intended.