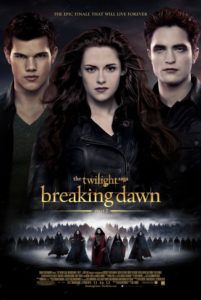 After consummating their love in The Twilight Saga: Breaking Dawn Part 1, Kristen Stewart’s mopey Bella and her sparkly husband, Edward Cullen (Robert Pattinson) finally come to realize the real advantages of vampirism in Breaking Dawn Part 2. Newly turned undead to save her from a dangerous pregnancy, the now-vamped Bella discovers her bloodsucker powers afford her bedroom perks beyond imagination—namely unlimited stamina, no need for sleep, and seemingly continuous passion. ”I’m never going to get enough of this. We don’t have to rest or eat,” she observes. “I mean, how are we going to stop?” Once again, author Stephenie Meyer’s Twilight series proves itself to be about adolescence passing into sexual maturity, all the while setting unrealistic expectations for inexperienced young readers and moviegoers. There ought to be a disclaimer after the movie—“Individual results may vary”—just so teenagers don’t get their hopes up when their own first sexual experiences prove disappointing by comparison.

This fifth and last filmic entry, shot back-to-back with Part 1 by director Bill Condon, marks the couldn’t-come-soon-enough end to a series that began in 2008 and, like the books, has sustained a blindly devoted fanbase. Screaming and swooning hordes of “Twihards” have given well over $2 billion to Summit Entertainment over the years, confirming that quality matters not when an intellectual property maintains this kind of zealous popularity. To be sure, none of the movies have been particularly enjoyable, and fewer still demonstrate any cinematic flair. Still, they’re huge moneymakers, so the filmmakers see no point in trying to make a better movie. Taking a cue from Harry Potter and the Deathly Hallows Part 1 and Part 2, the studio opted to squeeze every dollar out of Meyer’s franchise by likewise splitting the last book into two parts. This second half ends with enough sex and violence to be more diverting than any entry before it; however, don’t think the persistent problems throughout the series have suddenly disappeared.

Awaking a red-eyed but not-so-pale vamp, Bella is guided by Edward to test out her new supernatural powers: heightened senses, agility, and strength. Edward stops her bloodlust from taking over when she sees an easy meal—a dangling mountain climber—but he has no problem allowing her to tear into a mountain lion. This aspect of the series I have never understood. Edward and his band of Washington state vampires refuse to imbibe human blood, going against their nature and pretending to be human by feasting on animals, when they could be reducing the surplus human population (Bah, Humbug!). Instead, they slaughter endangered predators and feel good about themselves. Since they’re so high and mighty, why not kill human criminals, not unlike Dexter Morgan? The answer: Teenage girls might not read a book or watch a movie about killer vampires, but bloodsuckers that are made of diamonds. Anyway, Bella proves she’s the strongest of the Cullen troupe in an arm-wrestling contest against the family bruiser, and she soon calms the family by demonstrating that she has no trouble resisting her bloodlust. Later, Edward and Bella head into the woods to their honeymoon cabin getaway for an extended bedroom sequence shot in a steamy PG-13 style.

Unleashed from her character’s sulking, lovelorn restrictions, Stewart portrays “the new Bella” with some aggressive oomph, rendering the character more energized for her new powers, and a ready participant for forthcoming battles. Pattison’s Edward remains his same old brooding self. Meanwhile, their half-breed daughter, Renesmee (Mackenzie Foy), rapidly grows bigger and threatens to expose the existence of vampires in the world, which alerts the Italy-based bloodsucker high command, the Volturi. But before getting to the final battle between the Cullens and Volturi, let me first address Renesmee. Foy is subject to a series of CGI overlays to create the illusion of her speedy growth, and at times the effect is laughably bad and somewhat offsetting. In her baby form, Jacob (Taylor Lautner) “imprints” on her, meaning he’s betrothed himself to her, a point that is never clearly defined. At first, this point seems like he’s vowed to become her protector, but later scenes make it vaguely clear that Jacob and Renesmee will be together in that way. Granted, she’s immortal and all, so age is relative, but it’s strange seeing Lautner share scenes with the 10-year-old Foy, knowing their characters are “meant to be”. It should also be noted that Lautner is afforded an almost self-parodying shirtless scene, so this Twilight experience will feel hunkily complete.

And now, back to the epic battle, which consumes the final twenty minutes. Led by Aro (a slithery Michael Sheen, who employs a bizarro laugh at one point), the Vatican-esque clan resolves to wipe out the Cullens, who defend themselves with the help of Jacob’s tribe of werewolves (or shape-shifters or whatever) and an international vamp coalition bound to protect Renesmee. When the two opposing sides meet in a snowy field and charge toward one another in a sequence cut from Braveheart’s cloth, it becomes clear Condon hasn’t resolved this franchise’s proclivity for silly-looking computer-generated creatures that move in graceless ways. Animated wolves and countless decapitations demonstrate how the filmmakers have ignored complaints about the previous movies’ special FX being absurdly cheap looking for a billion-dollar franchise. Still hilarious (and pathetic) are the CGI swishes when vampires zip from here to there in an instant, or when vamps run at top speeds but move their arms in normal time. The final battle might’ve been impressive if it wasn’t spoiled by such distractingly low-quality effects.

The Twilight franchise’s most cherished quality—that crucial element putting the teenage girl fanbase in a tizzy—has always been the aching romance between Bella and Edward. Now that their love no longer aches, we’re left with a whole movie’s worth of build-up to a sloppily realized skirmish between exquisitely groomed monsters. Nearly all of Beaking Dawn Part 2 exists in the realm of inferior CGI, a component that, in its consistent badness, has altogether disrupted the romantic tension throughout five movies. Here, save for the notion that Bella and Edward might be separated from their weirdly visualized child by the Volturi, there’s little else except some lingering emotional involvement from previous entries to keep us involved. For those of us who have never much cared for Meyer’s book-to-film adaptations, this final movie’s send-off won’t affect audiences as it does long devoted fans, who, as is custom, will make apologies for the movie’s flaws and feel personally offended by detractors. In the end, the movie attains the same level of mediocrity as its predecessors, only on a grander scale. What more can one expect?