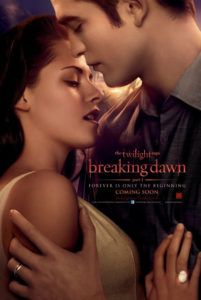 Breaking Dawn, Part 1, the second-to-last filmic entry in Stephenie Meyer’s Twilight franchise, confirms what I’ve long suspected: This series is all about repressed sexual desires. Since the first movie, glitter-in-the-sunlight vampire Edward (Robert Pattinson) has resisted mating with his horny human girlfriend Bella (Kristen Stewart) because he wants to wait until marriage. Meanwhile, Bella flirts with another potential lover, the werewolf Jake (Taylor Lautner), whose shirtless antics make Bella’s heart flutter with confused teenaged emotions. As a result, Bella causes a whole slew of perilous situations amid the assorted vampire and werewolf tribes, to the extent that she might be considered an accidental femme fatale. In this film, all of this leads to Bella and Edward getting married and finally having sex, which has always been the series’ inevitable climax, if you’ll excuse the pun.

It’s the beginning of an end that can’t come soon enough. Much like Warner Bros. with Harry Potter and the Deathly Hallows Part 1 and Part 2, Summit Entertainment refuses to let go of their tentpole franchise before squeezing out every last dollar, so they’ve broken Meyer’s final Twilight book into two parts. The second is due fall of 2012. But unlike the widespread appeal of Harry Potter, the Twilight phenomenon has been largely fodder for teenagers and suckers for soap opera brand melodramatics. The characters don’t grow much from movie to movie, nor do the movies become darker or more mature. The formula for each is the same: Bella and Edward are in love; someone or something threatens to stop their love; Edward and his vamp family the Cullens stop the threat; Bella and Edward resume their love. The events in New Moon and Eclipse were so monotonous that someone could easily go from Twilight to Breaking Dawn and not feel that they’ve missed much.

The first half of Part 1 concerns the wedding and honeymoon. These scenes work because the actors playing Bella and Edward have actual chemistry, despite the silly dialogue they’re forced to utter with supreme mopiness (Steward continues her awkwardly-filled-with-emotion routine; Pattinson continues his impersonation of Luke Perry). After the ceremony, Bella is wisped away to a secluded island off the coast of Rio where she finds Edward reluctant to consummate their marriage. She’s been waiting three movies for this, and when they finally get down to business, the shot fades away and reappears the next morning with the bed in shambles, broken from Edward’s apparently devastating thrust. Regardless of her bruises, Bella experienced nothing but pleasure, making that a first for any virginal bride. For Edward, he says it was the best night of his existence. Young women who take any stock in Meyer’s storytelling are left with unreasonable expectations for their poor, unfortunate future lovers.

With Bella and Edward having finally bedded one another, they’re much less interesting. The sexual tension between them was the element saving the previous films, if you can say they were saved at all. Now, afraid to bruise Bella, Edward refuses to ever make love with her again, and their new struggle becomes whether or not Bella can lure Edward back into the sack. There’s a cutesy “tryin’ to get him to do me” montage that’s sort of fun. At any rate, after Edward loosens up, they quickly discover Bella has become pregnant by Edward’s super vampire semen, and the baby-thing—no one knows what it will be—is growing at an accelerated pace and killing Bella in the process. Meanwhile, Jacob and his band of werewolves fight over whether to allow the baby to live. What follows are a series of unintelligible vampire vs. werewolf fights rendered in cartoony CGI, while Bella rests at the Cullen home waiting to give birth. But will she survive? If not, surely she can be turned into a vampire at the last moment, right? Of course she can.

Director Bill Condon has found a natural project given his credits, having surveyed creatures of the night in Gods and Monsters and sexual exploration in Kinsey. He’s too talented for this material; but then, none of the skilled directors on this franchise (David Slade, Chris Weitz, Catherine Hardwicke) have imbued their entries with a personal touch—probably because there’s no amount of fancy directing that can make Taylor Lautner’s acting or the speedy vamp running believable. Each film has the same problems: unintentionally funny bad acting; sloppy special FX; corny musical interlude montages to enhance the melodrama; an intriguing first-half romance, followed by a dull, battle-ridden second-half. Additionally, this one features almost no tangible conflict at all, no sense of real danger. There’s the threat of Bella dying or the werewolves slaughtering the baby, but we know that won’t happen because there’s a Part 2 coming. None of it is very exciting, and nothing in the film’s second half compares to the serviceable charm of the first half.

If ranking the Twilight movies, I suppose you could place this one just after the first in terms of quality, but only because New Moon and Eclipse were so awful. This one’s pretty awful at times too. But, teen girl readers have argued that Breaking Dawn is the best book because it’s the longest. There’s a joke to be made here, but I’ll avoid it. Needless to say, Meyer and the producers who conceived this two-part scheme carry on a great misconception that bigger is better. The story also implants the notion that a relationship that results in bruises is acceptable, as long as there’s love behind it (pay attention future battered wives!). Not to mention the movie’s laughable idea that “the first time” will be nothing short of spectacular. Put aside the monsters, and this movie would still be a fantasy. (Question: If Edward and Bella have a ménage à trois with Jacob, would Bella become Frankenstein’s monster?)