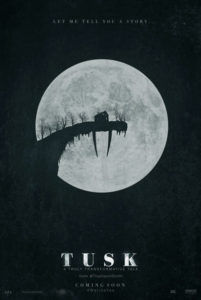 No matter how unique Kevin Smith’s Tusk may appear on the surface as a horror movie concept, his scenario about a psycho who turns humans into walruses feels reminiscent of The Human Centipede, with a dash of The Texas Chainsaw Massacre, and Smith’s own brand of stoner humor. You may have paused at the walrus part of that sentence because, frankly, it’s a bizarre notion, to be sure. But much like sewing people together anus-to-mouth to form a physically connected conga line, once you get beyond the idea’s novelty, there’s not much there for the viewer to savor. Smith, making his most unusual film in his post-View Askew career, which has included such misses as Cop Out and Red State, delves into repulsive body horror. And not the kind of emotionally relevant or socially conscious pictures of the David Cronenberg variety; but rather, that familiar fly-caught-in-a-spider’s-web scenario where someone’s abducted and tortured for the duration of the runtime.

Justin Long plays Wallace, a crass Los Angeles-based podcaster who hosts the “Not-See Party” (get it?—it’s a homonym for “Nazi Party”) alongside his best bud Teddy (Haley Joel Osment). Wallace travels around and meets bizarro people and then reports back to Teddy, who did not see them, and tries to explain just how bizarre these people were. Many laughs are had at the expense of others—take “The Kill Bill Kid,” an unfortunate loser from Canada who accidentally chops off his own leg while videotaping his sword swinging routine in his garage. His video becomes a YouTube sensation, and the despicable Wallace heads to the land of Canucks for an exclusive interview. “He turned down Oprah for me,” Wallace exclaims to his girlfriend Allison (Genesis Rodriguez), who he refuses to bring along, mostly because he likes to bed random female fans on the road. When Wallace arrives, however, he discovers “The Kill Bill Kid” has committed suicide, and now he must find an alternative interview subject.

Hanging on a men’s room wall is a handwritten note from someone claiming to have led a life full of adventures, and he’ll share his stories with anyone willing to lodge with him and perform some household chores. When Wallace meets Howard Howe (Michael Parks, who makes a fascinating maniac), he’s taken by the man’s natural charm, his regal home tucked away in the woods outside Manitoba, and his penchant for compelling anecdotes about his life. Still, Wallace remains a mouthy jerk, and so when he’s drugged and abducted by Howard, you hardly feel for him. Wallace comes to, and he’s bound to a wheelchair and minus one leg. And after Wallace screams his lungs out, we learn Howard is a wacko determined to transform his prey into “Mr. Tusk”—the given name of a walrus that once saved Howard’s life on a cold ocean isle after a shipwreck. Determined to rekindle that time of bestial bliss, Howard performs a number of surgeries that gradually build Wallace into the fleshy, stitchy patchwork that becomes Frankenstein’s walrus.

Smith based his screenplay on a discussion with fellow podcaster Scott Mosier about a personal ad in which a landlord offered free lodging if the boarder agreed to dress as a walrus. Using the ad as a springboard, Smith and Mosier’s hypothetical discussion resulted in the writer-director penning a script. And tonally, it’s a mess, split between absurdist situations and gross-out horror. Tired jokes about Canadians loving hockey, being overly nice, and saying “ah-boot” instead of “about” feel stale. Whereas Smith’s obvious treatment of Wallace and the character’s ironic karmic punishment is eye-rolling: “Wallace” and “walrus” sound too much alike to be an accident; no doubt Smith chuckled to himself when he told Long to grow a walrusy mustache; Wallace pokes fun at the kid who lost his leg, and then he loses his own leg; and finally, Wallace behaves like an animal until he’s actually turned into one. It’s all very coincidental and cute, far too self-satisfied, and seems like an idea inspired by cannabis.

Since Wallace has gone missing, Allison and Teddy launch a search and engage a weirdo Quebec detective named Guy Lapointe (Johnny Depp, under a shoddy fake nose, mustache, false bushy eyebrows, wig, and beret) who steals the third act, but not in a good way. In an over-the-top Quebecois accent, Guy monologues about his longtime hunt for Howard Howe, and these scenes seem to go on and on. And because this is a Kevin Smith movie, there’s no shortage of jokes about sex and scatology either, nor a shortage of unnecessarily long discussions that feel mislaid. Meanwhile, Howard’s ultimate goal of turning Wallace into Mr. Tusk mutates into a strange battle to the death, with Howard in a walrus suit fighting against the newly formed Mr. Tusk. It’s a sequence more likely to incite uncomfortable laughter than either pure laughs or raw terror. Makeup designer Robert Kurtzman developed the walrus getups, but it’s difficult to understand what’s happened to Wallace. Over the course of just two or three days, he’s completely reshaped. When did his surgery incisions have time to heal? Was he put inside a walrus suit, or has he become a walrus-man thing? Frankly, it’s unclear. But then, it’s a mistake to look for even paper-thin logic in most horror movies, especially one in which the walrus has a significant role. What’s next—nature’s clown, the platypus?

Veteran actor Parks, who often has a role in various Quentin Tarantino and Robert Rodriguez projects, gives a creepy and effective performance. But Long overacts in every scene he’s in, and even though he’s supposed to be an annoying egomaniac who receives his comeuppance, it’s grating nonetheless. If there’s one clever stroke beyond hiring Parks, it must be Smith’s choice of Fleetwood Mac’s thumping “Tusk” on the soundtrack in the climactic sequence—it’s a song that has a chanting tempo that fits this kind of unsettling material well. And cinematographer James Laxton gives Tusk a polished look, more so than any other Smith film. The problem is that the material never quite commits itself tonally. Some scenes feel like a grotesque chiller, others play like your usual Smith-brand comedy. When Smith tries to combine these two tones, the unbalanced result is more awkward than enjoyable. Above all, the whole thing feels like an inside joke dreamed up in a drug-fuelled haze, but the audience isn’t in on the joke.