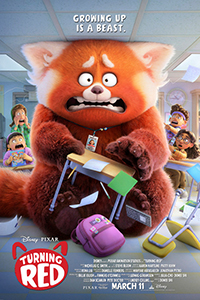 Countless Hollywood movies follow adolescent boys who test their friendships and learn valuable life lessons under fantastical circumstances. Examples ranging from E.T. The Extra-Terrestrial (1982) to Stand by Me (1986) to Netflix’s Stranger Things series focus on the rambunctious way boys relate to one another. But girl friend groups remain underrepresented in movies, if not entirely ignored. That’s just one of the ways Turning Red, the latest Pixar gem, breaks from conventions. Director Domee Shi, a longtime Pixar creative and helmer of the Oscar-winning 2018 short “Bao,” co-wrote the feature with Julia Cho, filling the story with her distinct Chinese-Canadian identity. A dazzling visual treat, the film is rich in Chinese heritage and Toronto landmarks, and the cultural specificity enriches the material’s relatable themes. Turning Red, a story about a 13-year-old who transforms into an enormous red panda, becomes an inspired metaphor about girlhood and puberty, which not only demystifies the taboo subject but seeks to open communication about emotional hang-ups that emerge in adolescence and can sometimes last the rest of our lives. Like Pixar’s best films, it uses a simple concept as a springboard for complex emotions and visual delights.

At the outset, the quirky Meilin Lee (voiced by Rosalie Chiang), affectionately known as Mei, has many hallmarks of a typical teen girl. She maintains a preadolescent shamelessness that “embraces all labels” and hasn’t yet learned to feel embarrassed about her random dancing or pining after aimless teenage boy Devon. Set in 2002, a period rife with Giga Pets and “Cha Cha Slide” references, not to mention the pervasive boy bands like the resident 4*Town (confusingly composed of five singers), the film draws from Shi’s childhood. As a Chinese-Canadian, Mei also feels overriding obedience to her parents, particularly her overbearing mother, Ming (Sandra Oh). Mei has posters on her bedroom wall reminding her to “Study” and “Work” and “Listen,” and she even slaps herself in the mirror to remind herself to live up to her mother’s expectations: “You are her pride and joy, so act like it.” After school, Mei works alongside her mother at the Lee Family Temple, the oldest of its kind in Toronto. Unfortunately, these responsibilities detract from her three supportive, equally idiosyncratic friends: the skater Miriam (Ava Morse), the spazzy Abby (Hyein Park), and the dry Priya (Maitreyi Ramakrishnan). Together, the girls obsess over 4*Town and dream of attending an upcoming concert, an event they believe will transform them into women. 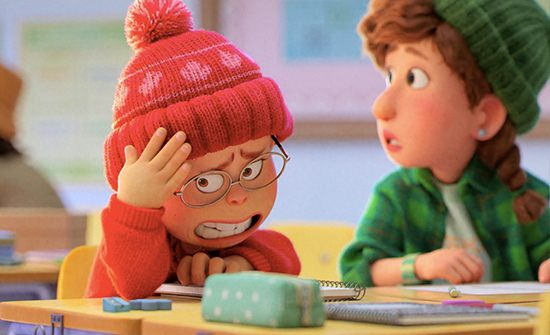 After a mortifying scene in which her mother publicly confronts her crush, and in doing so, exposes Mei’s embarrassing romantic doodles, Mei goes to sleep and experiences a wild series of nightmares (a sequence that challenges the hallucinations from 2015’s underrated The Good Dinosaur in their sheer strangeness). She wakes up to discover a remarkable change—not her period, but she does smell different and has hair in places there wasn’t before. She’s an eight-foot red panda, her family’s spirit animal. She learns that, long ago, the gods imbued her family’s ancestor, Sun Yee, with the red panda spirit to help her ward off enemies. Ever since, the spirit has emerged in the family’s women at puberty. But there is a cure—a ritual performed on a Red Moon that seals the spirit inside a talisman. In the meantime, Mei must learn to control her emotions. Once calmed, she returns to her human state, albeit with a rust-red head of hair to hint at the change inside. Not only must Mei negotiate her hormones and control them at school, where a braces-mouthed bully reminiscent of Sid from Toy Story (1995) taunts her, but she must contend with her mother. Ming’s oppressive smothering stifles Mei from being herself—the person she is with her friends who want to attend the 4*Town concert.

Of course, the scenario functions as a thinly veiled metaphor for puberty and a girl’s first period. It underscores how a patriarchal society has turned this commonplace event into a source of embarrassment for many girls—the title suggests both menstrual blood and blushing. Nevertheless, it handles the subject with tact, honesty, and humor. Yet, one cannot help but think the allusions to socially stigmatized matters of menstruation and feminine hygiene products were why Disney chose to debut the film on their streaming platform and not in the theater, where Turning Red belongs in all its colorful glory. Pixar, ever ahead of the curve, continues to advance progressive ideas and cultural diversity in their films, whereas, according to a recent account in Vanity Fair, Disney walks the culture war line to avoid offending conservative viewers and ensure maximum profits—even while it claims to be “inclusive.” Even so, Turning Red delivers the kind of movie that many adult women will no doubt wish they had seen when they were younger, when female representation in Disney movies was constrained to princesses.

Much of the discourse about Turning Red has focused on its remarks about puberty, and sure enough, that plays a significant role in the film’s themes. However, consider also the resonant themes about having control over your emotions. Hormones flair relentlessly during adolescence, causing all manner of emotional outbursts and irrational feelings. But adults don’t miraculously gain emotional composure upon maturity. The struggle to manage our emotions continues indefinitely—as evidenced by a subplot involving Ming’s unruly red panda spirit, and Ming’s fractured relationship with Mei’s grandmother, Wu (Wai Ching Ho). After all, people remain works in progress. Most of us fight a battle with our emotions well into adulthood, relying on various forms of therapy or self-care to function, and it’s unending. The film wisely observes that once we embrace our emotional selves, instead of hiding our feelings behind an outwardly composed veneer, we achieve a state of self-understanding or at least an acknowledgment that we cannot resolve our emotions with a magic spell. Turning Red might be accused of leaning into a stereotype about how Chinese women control their daughters with strict expectations and, therefore, pass that domineering quality down in an ongoing cycle. Still, given Shi’s authorship of the story, it also feels authentic and from a place of genuine feeling. 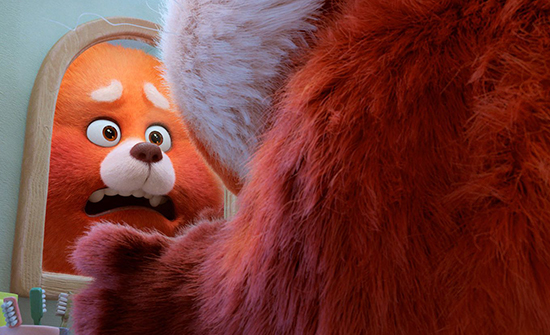 Although Turning Red looks like a superior computer-animated feature from Pixar, Shi and the creative team employ anime flourishes as well, giving the film a hint of Asian influence. Yes, the setting in Toronto, which features a vibrant Chinese community, gives way to a gorgeous rendering of the Lees’ red temple, lanterns, and cuisine. But note how when Mei-panda cries, massive tears flow down her cheeks in cartoony waves. Or when characters spot something adorable, the animation channels their kawaii-style eyes—large, glittery orbs that reflect shimmering sparkles of white light. Mei’s emotional, Incredible Hulk transformations from a girl to a furry, rather adorable beast also allow her to leap vast distances like Hayao Miyazaki’s Totoro. Elsewhere, the visual presentation boasts a frantic, hyperactive editing style and montages that seem to draw from Mei and her friends’ zippy teenage brains. Unfortunately, when the conflict between Mei and her mother comes to a head, compounded by the arrival of several women in Ming’s family, Turning Red delivers a video game finale, complete with a towering boss battle at the 4*Town concert. It’s a generic climax, though the concert music features songs by Billie Eilish and her brother Finneas O’Connell, which convincingly and comically replicate the sounds of 2000s-era pop music.

Pixar often confronts the way children manage their emotions, with Inside Out (2015) standing above all others; the studio has even addressed similar issues of mother-daughter relationships in Brave (2012). But where Turning Red becomes unique is threefold: First, its ethnic specificity speaks to a nonetheless universal condition of how children, when trying to appease their parents, engage in self-denial, as the standards of others create impossible expectations—and that can have lasting implications. Second, the film’s treatment of puberty for girls is something no animation studio has explored, and it’s refreshingly matter-of-fact here. Third, and perhaps more novel, Shi presents an endearing friendship between girls that feels all too rare. In coming-of-age films, girl protagonists often appear as loners and outsiders, whereas supportive and lasting female friend groups are a rarity. Even though it occasionally relies on banal resolutions and cliché dialogue (there’s a lot of “I’ve got this” and “Let’s do this” throughout), Turning Red breaks new ground. And then there’s the cute factor of red pandas, which cannot help but produce a ridiculous smile from start to finish. Needless to say, Disney will sell a lot of Mei-panda plushes.