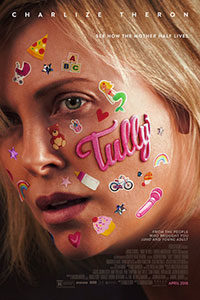 Tully marks the third collaboration between director Jason Reitman and screenwriter Diablo Cody. In 2007, Cody more than Reitman became a sensation and household name with her snarky dialogue and hipster nonchalance in Juno, the formula Fox Searchlight indie that has not aged well, although it earned her an Academy Award for Best Original Screenplay. In 2011, they worked together again on Young Adult, a dark comedy that reeked of autobiographical touches and featured Charlize Theron in an unsympathetic role as a miserable, irredeemable writer who lives in the past. Somewhere between the two, perhaps around the 2009 release of the Cody-scripted horror-comedy Jennifer’s Body, the writer’s celebrity became annoyingly omnipresent, especially in Minnesota, her former stomping grounds and mine, where Cody worked in adult entertainment and wrote for the alt-mag City Pages. In any case, as Cody’s ubiquitousness waned, especially after her failed 2013 directorial debut, Paradise, so did my exhaustion with her celebrity.

All of this is to say that, with Tully, I went in hopeful that it would restore my confidence in both Reitman and Cody, and that it would give its star, Theron again, another excellent role. At least the latter is true. Theron plays Marlo, a suburban mother whose life has been ripped apart by the responsibilities and sleeplessness of being a mother of three children. It doesn’t help that one of the children is her husband, Drew (Ron Livingston), the family’s breadwinner who is otherwise useless. Sure, he brings home the bacon and occasionally helps the children with their homework, but his checked-out evenings tucked away in their bedroom, lost in some video game, means that Marlo must endure an endless string of sleepless nights. Her sleep deprivation also means that her role as a mother for their two children—their newborn, and their young boy, Jonah (Asher Miles Fallica), who’s slightly more tolerable than the boy from The Babadook (2014)—amounts to lifeless feedings, transportation, and occasionally erratic behavior. That Drew fails to notice or do anything to change Marlo’s situation makes the character insufferable.

Fortunately, Marlo’s brother, Craig (Mark Duplass), and his New Agey wife, Elyse (Elaine Tran), offer to pay for a “night nanny” service that would alleviate her burden. The nanny arrives in the evening and watches the newborn, allowing Marlo to catch some much-needed sleep, awakened only for nightly feedings. Although reluctant to accept the service at first, Marlo soon concedes and finds that the nanny, Tully (Mackenzie Davis), does more than watch over the infant. She’s also there for Marlo’s health and wellbeing. An attractive 26-year-old that embodies youthful optimism, Tully is presented as the opposite of Marlo; every possibility in Tully’s life remains open, and she seems to have an easygoing philosophy for everything that, in Marlo’s life, is chaotic. More than merely allowing Marlo to catch some much-needed winks, she becomes a friend and confidant, providing Marlo with an outlet that Drew has failed to supply for some time.

Of Theron and Davis, it must be said that their talents offer rich, complex performances. Theron provides an emotionally raw portrait of a mother both burnt out and wasting away, physically and mentally. Marlo is deeply sarcastic and disenchanted with her life, and Theron perfectly captures Cody’s blend of cynicism and humor that defines the character. Still carrying much of her muscular physique from Mad Max: Fury Road (2015), Theron has added on a few additional pounds to portray a woman who, quite realistically and uncharacteristically for a film, still carries her baby weight—even if her belly is obviously achieved with practical makeup. Though it’s a cliché to call a performance brave or fearless, those adjectives apply. Davis, meanwhile, manages to appear wise beyond her years, adopting the magical quality that Cody often grants to a single character in each of her screenplays.

Alas, Cody’s kitschier impulses ultimately undo the film’s dramatic potential. (Purists will want to skip this paragraph, as I plan to discuss the third act in detail.) There comes a point in Tully where the nuanced character study descends into an absurd and laughably bad plot. The night after Marlo and Tully have an intimate discussion about the lack of sex in Marlo’s marriage, leading to an out-of-nowhere scene where Marlo presents Tully to her husband as a sexual offering, Tully invites Marlo out for a night on the town. They drink, see a concert, and then Tully resigns. In chaos and panic, they drive home drunk, which ends in a car accident. When Marlo comes to, it’s revealed in a conversation between the hospital staff and Drew that Marlo never hired a night nanny. Tully was a figment of Marlo’s imagination, merely a symptom of her postpartum depression and psychosis, and moreover, was a reflection of Marlo’s younger herself—Tully, it’s revealed, is Marlo’s last name. The hackneyed dramatic device of the split personality or it-was-all-a-dream revelation such as this spoils any goodwill the film has established until this point, which is a significant loss.

Formally, Reitman puts forth another confident, if straightforward, and achingly personal production with Tully, and he correctly relies on Theron to do most of the heavy lifting. And Theron is terrific, even if the script becomes embarrassingly contrived. For a large portion of the film, Theron commands the screen and delivers a vulnerable performance. I even found myself thinking “this is great” more than midway through, hoping that Cody’s screenplay would sustain its high level of authenticity and insight. However, the irritating turn late in the film robs the material of its fierce emotional integrity. It begins as a natural and honest showcase about the struggle of mothers and women but loses its integrity with an obvious, writerly choice that reeks of artificiality and pretention. Tully takes a complete turn-around in the final scenes, from a genuine and feeling story about parenthood into an ill-conceived drama, and neither the film nor this viewer recovered.