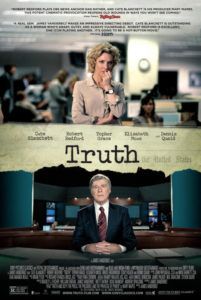 Obvious pretensions about the title aside, James Vanderbilt’s directorial debut Truth offers a scathing look at the motives behind modern journalism. In an era where infotainment reigns supreme and ratings matter more than concrete journalism, remembering how real journalism was once something this country fought for, as opposed to sold, is more important than ever. About the Killian documents controversy at CBS News in 2004, this newsroom drama follows the uproar from start to finish, beginning with the investigation launched by 60 Minutes producer Mary Mapes and ending with Dan Rather resigning from the network. Vanderbilt’s smartly composed first feature is probing and written with skill, just as his screenplay for David Fincher’s masterful Zodiac (2007) was, and the slow-burning account is helped along by several excellent performances.

Based on Mapes’ book from 2005, Truth and Duty: The Press, the President, and the Privilege of Power, Vanderbilt’s film opens with a nerve-racked Mapes (played by Cate Blanchett) in an attorney’s office. She recounts her side of the story, beginning in 2004 just after her Peabody Award-winning report on Abu Ghraib. Already the film might be considered predisposed, being based on Mapes’ book and telling her story; then again, this isn’t journalism, it’s cinema. And within a few moments of screentime, Mapes has assembled a team to investigate George W. Bush’s military record, specifically the accusation that he dodged the Vietnam War by using his family’s influence to acquire a hard-to-get spot in the Texas Air National Guard in 1968. She’s joined by freelance reporter Mike Smith (Topher Grace); Lt. Col. Roger Charles (Dennis Quaid), a vet and Mapes’ go-to investigator; and journalism professor Lucy Scott (Elisabeth Moss).

Mapes’ team researches and tries to validate documents given to her by an aged military man (Stacy Keach), the memos having originated from Bush’s commander, the late Lt. Col. Jerry B. Killian, in the early 1970s. Given a number of favorable assurances and confirmations about their sources and information, the story’s production team rushes to meet their deadline to air, with Dan Rather (Robert Redford) as anchor. Though initially well-received, holes are found in the evidence provided Mapes. Bloggers start attacking the story’s data, specifically related to the types of fonts used in Killian’s memos. And then the other networks begin their own investigations. Under the heat, Mapes’ sources back down. Others recant. Independent investigators are hired to scrutinize everyone on Mapes’ team and accuse them all of political bias in their reporting. The head of CBS News (Bruce Greenwood) calls for on-air apologies and later fires everyone involved. All the while, any public or journalistic curiosity about Bush’s military history fades into the ether.

Of the actors, it must be said that no matter how iconic Redford may be, he disappears into the Rather role, delivering the former anchor’s cadence and mannerisms brilliantly, and almost never reminding us he’s Robert Redford. Blanchett delivers another blazing performance, portraying Mapes as human, vulnerable, and sympathetic—a complex and emotional being that fights for what she believes. Truth could be accused of going easy on Mapes, as she made some unfortunate mistakes that bring into question her journalistic integrity on this particular story. One could argue the producers pressured Mapes to run with the story too early; you could also argue that Mapes should have pushed back if her story was not yet ready for prime time. Wherever you come down on the mistakes that were made, and with whoever you side politically, one cannot ignore how the media so frequently distracts from an unpopular story by confusing the issue (i.e. making a target out of Mapes and her team, instead of trying to verify her story). But those who focus too much on this element of the film miss the point—that Mapes isn’t the story.

The story is about how journalism has become a commercial prospect. There’s a poignant scene near the end of the film where Rather tells Mapes how he remembers when the news divisions of television networks were never expected to make money; in fact, most news divisions lost money. It was simply an accepted fact, because that was the cost of good reporting. Today, networks are less concerned with digging for the truth and asking the important questions; they’re focused on ratings. At one point in Truth, Smith, the resident hippie journalist, spouts out about how Viacom owns CBS and how Bush has made presidential decisions to help keep Viacom happy, which shapes how CBS reported news to keep Viacom in good graces with Bush. He may seem like a crackpot while he’s soapboxing this information, but there’s nothing in his rant that isn’t accurate. Indeed, Bush’s alleged relationship with Viacom, along with the media turning on Mapes and Rather as opposed to concentrating on Bush’s military history, no doubt secured his re-election.

Shot and cut with a simple professionalism rarely seen from first-timers, Vanderbilt’s modest technical presentation nonetheless supports a film that will incite conversation about the state of journalism today. Though detractors will take aim and call out Truth‘s so-called “liberal agenda”, you need only watch your local or network news tonight to see that Vanderbilt’s film contains some kind of truth. If you find 1) no infotainment whatsoever, or 2) any real reporting that has hasn’t regurgitated from an exclusive first reported by another media outlet, this critic would be shocked. Vanderbilt’s screenplay calls the “Memogate” scandal “the death of television journalism”. Perhaps he’s correct. At the very least, the scandal marked the death of Rather’s venerable career with CBS and disenchanted Mapes enough to keep her out of television journalism ever since. Truth represents these journalists through a sympathetic lens for what they were trying to do, not what they did, and through their story finds a sad reality about the business of news.