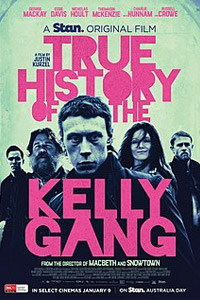 Ned Kelly was the most famous bushranger, the name of nineteenth-century Australian outlaws and highwaymen who sparked the collective imagination of the oppressed masses. Just as Jesse James had become a folk hero in the United States, Ned and his gang became symbols of Irish rebellion against English authority, the colonial enforcers who kept a tight, dehumanizing leash on those who, like Ned’s father, were taken from Ireland to Van Diemen’s Land. After Ned shot a policeman to prevent the arrest of his brother for stealing a horse, he launched into a series of robberies and killings on the countryside that ended in 1880, when a band of law enforcement cornered his gang at Glenrowan, shot most of them down, and captured Ned. He was just 25 when he was hanged for his crimes, but his legend has carried through history like that of Robin Hood—a working-class hero defiant to the injustices of the establishment. But True History of the Kelly Gang has a curious relationship with historical fact. It reformats the Australian figure into a punk rock icon, complete with a sinewy, sexually ambiguous George MacKay who plays Ned Kelly like an Iggy Pop character.

The story opens, as most biopics do, in the hero’s youth, somewhere in the country’s spare state of Victoria in 1867. “Nothing you’re about to see is true,” warn the opening titles. But then MacKay’s voiceover, reading from a letter Ned writes to his child, promises the ensuing story “contains no single lie.” Thus, the viewer prepares for a film that freely alternates between actual events and artistic license, while it splices contemporary imagery and music into the mix. Shaun Grant’s screenplay was based on Peter Carey’s 2001 book of the same name, though director Justin Kurzel transforms the material into a playfully shot and directed picture that subverts gender roles and underlines the hypocrisies of English rule. Some of the events even recall Jennifer Kent’s The Nightingale from last year, where ruthless constables terrorize Irish women and threaten their infants, using their authority to justify rape and cruelty. It’s often a brutal film, though its most cohesive sections belong to the first half.

The earlier section lays the foundation for Ned’s subsequent identity issues. Orlando Schwerdt plays young Ned, a child supremely disappointed by his father—in a relationship straight out of Rebel Without a Cause (1958), as his father is emasculated in an apron during a crucial scene. Ned’s mother, Ellen Kelly (Essie Davis), keeps the resident policeman, Sergent O’Neill (Charlie Hunnam), at bay by selling her body, humiliating her husband and children. At the same time, she wants her son to become a traditional man’s man, so she sells him to Harry Power (Russell Crowe), a famous bushranger, hoping that her son will get an education in killing. Ellen’s overprotective streak leaves Ned thoroughly confused, resulting in a film that contains Freudian interpretations galore, from the Oedipal signals between Ned and his mother to the queer subtext that emerges in his adult friendships with other men. Kurzel sexualizes at every opportunity, most overtly when Ned becomes the leader of the “Sons of Sieve”—Carey’s invention that suggests the Kelly Gang wore dresses to appear “crazy” to the police. 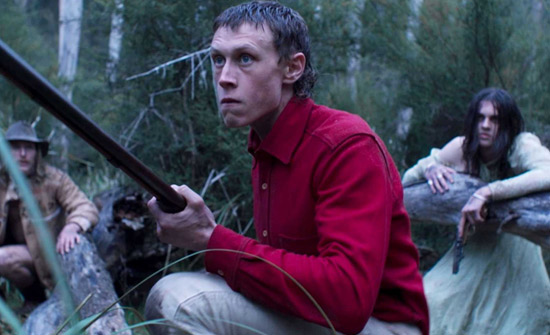 Ned emerges from his childhood into a man at odds with his family and himself. MacKay, whose breakthrough came in last year’s 1917, plays Ned as an impulsive and conflicted character who leaves the viewer off-balance. At one moment, his camaraderie with friend Joe Byrne (Sean Keenan) has all the makings of a love affair; in the next moment, he looks deep into his mother’s eyes for a loaded embrace. His ensuing and underdeveloped friendship with Constable Fitzpatrick (Nicholas Hoult) has a touch of eroticism in a scene when the two smoke a pipe in a brothel, as the British soldier sits naked beside Ned, still drenched in sweat from his latest sexual encounter. But soon, as the Constable’s monstrous behavior sets Ned down a path of Irish rebellion against the Crown, the screenplay forgets about characters like Ned’s sister Maggie (Lola Hewison), who prove so crucial to setting the conflict into motion. The film culminates in the fateful shootout where Ned dons a metallic suit to protect himself, and Kurzel’s treatment of the sequence is just as off-kilter as one might hope for and expect, based on the preceding two hours.

Best known for his 2011 debut Snowtown, about Australia’s notorious Snowtown murders, Kurzel’s highly dramatic and layered directorial approach comes from his theater background. He put his talents to better use on the 2015 adaptation of Macbeth, which starred Michael Fassbender and Marion Cotillard, who later appeared in the filmmaker’s attempt to go Hollywood with the abysmal Assassin’s Creed (2016). But True History of the Kelly Gang feels more experimental than his earlier films, as he employs several random formal touches that lend the experience the aforementioned punk appeal. Body-mounted cameras, Jed Kurzel’s electric guitar score, strobe lights, and hallucinatory imagery make the experience far from a traditional bushranger saga. Even as its aesthetic has a let’s-try-everything-and-see-what-works quality, it distinguishes itself from the many film versions of Ned Kelly’s life that came before—starring the likes of Mick Jagger, Heath Ledger, and Yahoo Serious.

With its confused central character and equally conflicted approach, True History of the Kelly Gang keeps moving and offers a many-splendored supporting cast. Crowe’s presence gives Harry Power a lasting mark on the film, whereas both Hunnam and Hoult stand out as particularly nasty English villains. Thomasin McKenzie (Leave No Trace) may be underutilized as the fictional sex worker who mothers Ned’s fictional child. Certainly, those looking for a historically accurate retelling of the Ned Kelly story may feel disappointed. Still, there’s some method to the madness that Kurzel puts onscreen. He challenges the masculine iconography of Kelly himself, while he also evokes terrorist imagery when he shows the Kelly Gang in their Glenrowan hideout with their faces covered by bags. Are they traditional folk heroes or anti-establishment revolutionaries who challenge political and sexual boundaries? At every turn, Kurzel challenges truth and oversimplified ideas about the Australian legend with a bold presentation, even as he avoids having a clear point of view.