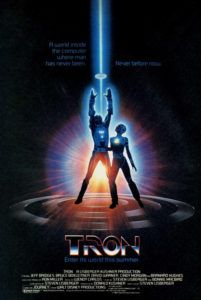 Walt Disney’s TRON serves as a compelling reminder that all the production value Hollywood has to offer doesn’t matter if the filmmakers haven’t dedicated themselves to good storytelling. Released in 1982, the film’s writer-director Steven Lisberger coordinates a then-unprecedented level of computer technology to construct a unique cinematic world set entirely within the imaginary landscape of computers. Employing cinema’s first use of computer animation in a large scale, Lisberger’s team breaks new ground that would later shape the way such genre pictures are made. But his distant tone and familiar plot structure have aged badly. Distinctive visuals are met by a lifeless and pointedly humanity-less storyline that ebbs the viewer’s potential sense of “fun”, and the early computer graphics render the movie a mere historical marker today.

Opening with an appetizer of sorts into the microcosm that exists inside computers, the story proceeds when videogame designer Flynn (Jeff Bridges) attempts to infiltrate the mainframe of his former company, ENCOM, to uncover evidence that another programmer, Dillinger (David Warner), stole his life’s work of successful arcade game designs. Dillinger has since risen the corporate ranks with the invention of his Master Control Program, which consumes other programs and adopts the best parts for itself. Flynn bands together with his friend, Alan (Bruce Boxleitner), to enable a regulatory program called “Tron”, which will monitor and report the sort of illegal accesses that Master Control thrives on. But when he gets too close to uncovering Dillinger’s plans, Master Control zaps Flynn inside the world of computers, where he plays against victimized (and personified) computer programs in a series of elaborate gladiatorial games.

Each character on the outside has a computer program counterpart on the inside, only with less personality. Alan’s heroic Tron program is also played by a plain Boxleitner; Dillinger’s counterpart Sark is played by Warner, just as devilish. They race on light cycles on arcade grids to the death, play jai alai with balls of energy, and toss “memory discs” (better known as Frisbees) at one another until victorious. Everything has a fluorescent sheen, and what isn’t glowing is surrounded by pitch black. Master Control appears as a cylindrical, spinning thing with humanoid features and a low, monotone voice. The lines are simple. The colors are clean. The whole thing feels as sterile and as geometrical as a stage on Pac-Man.

The basic plot elements of TRON contain embarrassing similarities to the structure of Star Wars, which had been released five years before and was never more popular than in the early ‘80s. Consider Tron a sort of straight-laced Luke Skywalker, with Flynn as the scruffy, comedic, yet heroic Han Solo (complete with cutesy “Bit” sidekick). They face a cyborg-esque enemy in Dillinger-cum-Sark, an equivalent of Darth Vader, who in turn answers to a higher evil force: The supreme Master Control serves two functions in a comparison to Star Wars, that of the Emperor and the Death Star; he is both a conscious evil and a physical structure that must be demolished. Tron and Flynn break into a communications tower, highly guarded by thinly veiled nods to Storm Troopers, only to make a narrow escape via light-speed from an elongated craft that slogs behind. When they finally reach Master Control, their enemy has a specific weak point that must be struck. Only Tron’s natural born expertise for disc-throwing can hit this target.

Unlike Star Wars, the film did not earn blockbuster numbers, though proved a profitable risk for Disney. TRON earned around $33 million in domestic grosses, making back almost double its $17 million budget. Critical reception at the time of its release was mixed-to-positive, earning rave reviews from the likes of Roger Ebert, who believed the resemblance to Star Wars was a positive feature, while other critics admired the tech behind the production yet found the plot rather flat. Over the years, audiences have regarded the picture as a cult movie, something exciting for computer and videogame aficionados (take Jay Maynard), not only for the film’s industry detail and realization of the computerized world, but for the signature 1980s tone.  Indeed, there’s something very campy happening under the surface of TRON. Take Master Control’s order that Sark get Flynn up to speed. “Get this clown trained,” he says, employing fratboy lingo that would otherwise be laughable and baffling for any computer program. Such examples go on and on.

For the unique, computerized look, the filmmakers shot live action scenes in black & white on entirely black stages, allowing computer animators to later rotoscope the backgrounds, adding the neon-like luminescence to which the film derives its signature. Hundreds of animators were employed to complete the process, as well as execute fully animated sequences that integrate cartoons with live-action characters. Limited computer technology of the period allowed for only so much detail onscreen, inciting animation supervisor Richard Taylor to coin the phrase “When in doubt, black it out”—as black took less computer memory than colors. From the “Bit” pet to the green robotic laser drones, be it computer or traditional animation, the film employs special effects and animation to create whole cinematic environments, achieving something that now seems common practice for genre films.

In terms of purely historical impact, Lisberger’s film remains significant for its innovations, and its uses of computer animation—and, to a lesser extent, hand-drawn animation. The production dared to render whole backdrops for live-action performers using computers, despite the fact that computer animation had just arrived onto the scene only a month earlier with Star Trek: The Wrath of Khan. With an approach that predated today’s green- and blue-screen technologies, one wonders where Hollywood would be without this advancement, when so many of today’s films rely on computer animation to create whole worlds? Whereas the likes of George Lucas didn’t see the possibility of computer animation (at the time, anyway), Lisberger took an incredible risk and larely succeeded in proving his point that computer animation could serve cinema well.

But like many cult movies from the ‘80s, the lasting appeal of TRON is better preserved in fond memories than with nostalgic viewings today. If you haven’t seen the film for years and you’re hoping for greatness, it will come as a disappointment, as filmic tech-spectacles tend to age in regretful ways. The effects in TRON were limited by the technology of contemporary computers, how much (or little, rather) memory they could handle, and therefore how much detail could be shown onscreen. It’s impossible to watch the movie today without identifying the era in which it was produced. But this is a typical problem among films about computers, or with breakthroughs in special effects—because, given time, there’s always a new and better technology. Already a title like The Matrix, which was considered a milestone in its day, has grown into a cliché, its effects merely average by today’s standards. It’s those rarities like Close Encounters of the Third Kind and Jurassic Park that avoid feeling dated by infusing equal parts viewer involvement and spectacle into their presentation. For this reason, a movie like TRON gets harder to watch as the years progress, whereas something comparable, like Avatar, will surely remain a timeless and significant piece of entertainment.

Of course, from a safe distance, when appropriately prepared for its cheesy ‘80s mannerisms, TRON entertains. It’s impossible not to like Bridges, if only for his chummy smile; Warner played many a memorable movie villain, and here is no exception; but Boxleitner and Cindy Morgan disappear into their surroundings. Indeed, many of the performances are rigid, as the filmmakers no doubt expected the artifice to do the work. There’s no real suspense in the movie, but there’s an undeniable feeling of nostalgia, particularly for viewers who grew up with it (younger audiences will likely scoff at the now-substandard effects). But more significantly, this is an important moment for the industry; even if the movie was looking backward for its story, it was also peering into the future for its presentation.