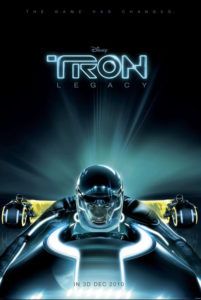 Almost three decades in the making, TRON: Legacy arrives and forces viewers to wonder why it took so long to render such an unremarkable film. Not that this sequel to Disney’s original from 1982 represents a complete failure, but its mediocrity brings to question why the filmmakers didn’t have a few more story conferences over the years. It’s a visually stunning production that brings to life a visionary science-fiction world, but the narrative simply doesn’t engage. The original TRON benefited from an influential approach to the material, both in terms of visuals and its use of computer tech lingo within a mainstream film. But this belated sequel seems satisfied with being your typical sci-fi actioner, straightforward and rather dull, without insight of any kind into our current digitally obsessed world.

When the story begins, we learn that in 1989 videogame designer and tech trendsetter Kevin Flynn (Jeff Bridges) was on the verge of a technological breakthrough that would “change everything” when he went missing. Since then, his company ENCOM has become a money-grubbing corporation, leaving Flynn’s friend Alan Bradley (Bruce Boxleitner, who also played the title role in TRON), to search for hope in Flynn’s rebellious offspring Sam (Garrett Hedlund). Sam remains uninterested in following his father’s footsteps and becoming the company’s CEO; he’s more interesting in finding some answers to his father’s disappearance. Alan sends the twentysomething Sam looking for his father at the old arcade, where Sam finds a secret lab.

Tooling around at his father’s dusty computer console, Sam is zapped into The Grid, a cyberspace world created by his father where computer programs look like humans and talk with voices inspired by Ben Burtt. He quickly discovers that The Grid is now ruled by his father’s program alter-ego, named Clu (also Bridges), a Hitler-esque dictator bent on spreading his plans for domination to the real world. Sam locates his father through his young apprentice Quorra (Olivia Wilde) to stop the evil Clu’s plans. Moviegoers will notice almost immediately that the title seems a curious one, if only because the character Tron has almost no lines and plays no crucial role to the plot. He appears as a lapdog to Clu, faceless and clicking like the alien from Predator. Meanwhile, Clu is the unfortunate product of motion capture animation, delivering a not-quite-right version of a young Jeff Bridges born and raised in the Uncanny Valley.

About half-way through, the viewer stops waiting for the show to ‘get good’ and realizes that the narrative, unfortunately, mirrors that of a videogame. Complexity eludes the storyline, as the plot falls into familiar territory when the power-hungry Clu raises an army to ultimately take over the world. From there it’s a by-the-numbers yarn where the withdrawn Flynn must be convinced by his heroic son to stop his mad alter-ego before it’s too late. This is a far cry from the tech-inspired plot of the original, which boasted a cautionary tale about allowing computer programs too much access to sensitive, potentially dangerous areas. The proceedings offer well-executed action sequences and some light humor from Bridges, who maintains his persona by ending his sentences with “Man” and uttering phrases like “You’re messing with my Zen”. But none of it—not the characters or the plot—is very involving.

There wasn’t much character development in the original film, and so there’s not much here either. Both expect the visuals to take precedence, therefore both feel filled with hollow personalities. An array of forced colorful supporting characters attempt to break up the monotony of the otherwise automaton-like drones devoted to Clu’s command. Michael Sheen plays an over-the-top huckster named Zuse, whose only purpose seems to liven up the otherwise mechanized behavior of the other programs onscreen. During one action sequence, which thumps with the quite brilliant score by Daft Punk, Sheen dances about the screen with all the buffoonery of a carnival announcer. Wilde’s spritely Quorra seems livelier than other characters, but aside from combat sequences, she hardly gets a chance to do anything interesting with the role.

The narrative borrows more than a few ideas from Star Wars, just as the original did. Anonymous and donning a shiny black getup, Tron becomes something like a mute version of Darth Vader, whose megalomaniacal master, Clu, serves as a counterpart to the Emperor. There’s even a crucial moment straight out of Return of the Jedi where Tron questions his allegiances with a turn of his head and suddenly rises to rebellion. Bridges plays Flynn somewhere between Yoda and Obi-Wan Kenobi, his hooded robe making those arms-out displays of power all the more dramatic looking. And, of course, young Flynn is your resident Luke Skywalker, learning about his father’s world and becoming the hero he was destined to become.

Where TRON: Legacy doesn’t disappoint is the visual design (aside from the aforementioned appearance of Clu). First-time director Joseph Kosinski comes from a background of architecture and computer animation, and along with production designer Darren Gilford, delivers a world rich with flickering florescents, dystopian structures, and ever-present storms looming in the backdrop. The gloomy yet imaginative atmosphere deserves comparisons to Blade Runner and Dark City for its technological splendor and sheer darkness. And as the fast-paced action scenes play out, it’s easy to lose oneself in the beauty of the artificial glow, even if the effect fades as the plot wears thin. Amped-up light cycle races and disc-throwing duels look undeniably cool, but these scenes occur early in the film, leaving the finale to feel underwhelming in comparison.

If only the filmmakers’ desire to tell a strong story matched their evident visual ambitions. Reportedly, Pixar story editors gave screenwriters Edward Kitsis and Adam Horowitz some pointers on how to improve the film. But if this is the result, one can’t help but imagine what TRON: Legacy was like before Pixar’s people assisted. For some, the result will be quite an experience—a spectacle to be viewed in 3D and enjoyed with oodles of popcorn. Yet for those hoping for something as engaging as the visual style is creative, keep waiting, and perhaps the inevitable sequel (hinted at with a cameo role by Cillian Murphy) will deliver the narrative goods that were lacking here.