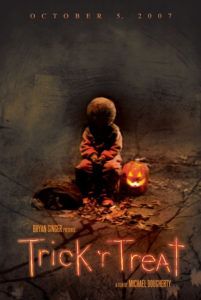 Monsters, child murderers, and creepy little kids—oh my! Trick ‘r Treat ventures into horror anthology territory to spin four delightfully spooky tales wrought with shocks and macabre humor, all taking place on one twisted Halloween night. Long shuffled around on the theatrical release schedule, and then forgotten on dusty shelves in the Warner Bros. vault, the film finally premieres on home video. But don’t take this limited debut out on the film. The studio refused to invest in full theatrical distribution not for artistic reasons, but because anthologies are hard to advertise, and because not releasing it provided an opportune power play.

Taking a cue from horror magazines of yesteryear, comic book-style animation plays over the opening credits, recalling, but superior to similar introductions in Creepshow and Tales from the Crypt.  However, there’s no skeletal host to the four stories, just Sam, the mute, masked, twisted kiddie guardian of Halloween. Sometimes he stands back and observes, and other times he’s what frightens us the most. Each story interweaves to avoid an episodic feel, and they all occur around the same time, some overlapping. Desperate screams in one story become a muffled Did you hear that? in another. They take place in the suburban town of Warren Valley, Ohio, where fallen leaves blanket the ground, scarecrows protect every yard, and cheap costumes range from Sexy Kitten with mesh pantyhose to the garden variety holes-in-bed-sheet ghost.

The film’s writer-director Michael Dougherty (X2) laces each account with rules about Halloween itself, whether they stem back to the ancient festival Samhain or come from urban legends now commonly associated with the holiday. For instance, one story reminds us to always check our candy. Tubby juvenile delinquent Charlie (Brett Kelly) doesn’t check his, and he ends up prey to his bloodthirsty school principal (Dylan Baker). But the characters must also have holiday spirit, which is jealously and violently defended by Sam. If someone decides to blow out a jack-o-lantern before the night is over, like killjoy Emma (Leslie Bibb), Sam appears and bloody retribution ensues. With his razor-sharp sucker and eerie costume, first you’ll want to know what he looks like under that mask, and then after you see, you’ll wish hadn’t seen his horrifying face.

Sam seems to walk us through each story. He’s passive when the virginal Laurie (Anna Paquin) dons her Red Riding Hood costume and heads into the forest, followed by the town’s resident vampire. And he’s barely there when a group of children find something horrible when they decide to pay tribute to the victims of the “Halloween School Bus Massacre” in an abandoned rock quarry. He’s an observer of death, partaking only in the opening and finale. When the crusty old Mr. Kreeg (Brian Cox) doesn’t give candy to the children knocking on his door, Sam pays him a visit. But then, how does Mr. Kreeg relate to the other stories? Discovering how each is connected presents a complete mosaic, versus a series of detachable episodes.

Dougherty previously worked with the film’s producer, Bryan Singer (Valkyrie), on Superman Returns, the monumental disappointment that all but ruined a tentpole Warner Bros. franchise. Bad blood pumped about the studio after the Man of Steel’s latest adventure failed to achieve the blockbuster numbers it should have. No doubt that when Dougherty’s film wrapped in 2007, the studio’s marketing gurus took one look at this collection of horror stories and scratched their heads. Its release met delay after delay, despite positive pre-release buzz and early praise from various horror film festivals. But with commercial failures like Grindhouse, how you do sell audiences on such a high-concept idea, especially when any choppily cut trailer can sell standard horror fare about ghosts and serial killers?

This is pure speculation, but perhaps Warner Bros., faced with a risky promotional campaign, decided to dump the film, Hollywood style, because it conveniently dealt a harsh blow to Dougherty and Singer for their failure on Superman Returns. Regardless, the exceptionally entertaining pageant of thrills and demented dark comedy speaks for itself, suggesting the studio’s mistreatment stems from something other than dissatisfaction with the final product. The film is simply too original and too fun to be considered anything less than a creative achievement. When theaters offer little more than remakes, Saw sequels, and increasingly unsavory gunk, Trick ‘r Treat makes a strong case for staying home.