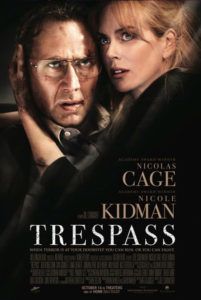 As if you needed another reason to loathe director Joel Schumacher, out comes Trespass (not to be confused with the same name Ice Cube and Ice-T starrer from 1992) with its absurd plot and hysterical acting to remind audiences why The Number 23 helmer should have retired long ago, after redeeming his Batman & Robin sins with Tigerland. Alas, Schumacher’s criminal efforts behind the camera continue here, exposing audiences to a movie potentially labeled “so-bad-it’s-good”, but mostly it’s just bad. A home invasion thriller, the movie rouses a curious amount of laughter, although the laughs are of the unintentional, mocking class. It’s the kind of movie where maybe a minute of screentime passes before the audience realizes it’s a colossal stinker. After that, we have no choice but to laugh as stars Nicolas Cage and Nicole Kidman over-act themselves into a pit from which there’s no escape.

Cage plays Kyle Miller, a fast-talking hustler living under the pretext of a diamond broker. He returns to his elaborately designed home after a long business trip, his wife Sarah (Kidman) tired of feeling neglected and his daughter Avery (Liana Liberato) upset that her parents won’t let her go to a party. Being a teenager, Avery sneaks out and goes anyway, later returning at the worst possible moment. Meanwhile, the extravagant home’s high-tech security system is cracked by a foursome of masked invaders seeking Kyle’s stash of diamonds, hidden away in a safe behind a painting (where else?). There’s lots of shouting on both sides, but mostly from Kyle and the head goon, Elias (Ben Mendelsohn). Elias holds a gun up to Sarah’s head and demands Kyle open the safe; Kyle refuses, stalling with arbitrary excuses. It goes around and around like this for most of the 90-minute runtime, the gun alternating among the captives’ heads, everyone screaming and threatening each other in endless circles. Earplugs are recommended.

Failing to achieve a thrilling cat-and-mouse between captive and crook, Karl Gajdusek’s silly scripting relies on a number of predictable twists to keep the momentum. Sarah recognizes one of their captors as Jonah (Cam Gigandet), their security install guy, but doesn’t say anything to Kyle about him; and Jonah seems particularly defensive when Sarah is threatened. Are they having an affair? Who knows. The crooks’ muscle, Ty (Dash Mihok), seems to be holding the other crooks hostage; meaning Elias, Jonah, and Elias’ crack-smoking stripper girlfriend (Jordana Spiro) are all desperate and under the gun, just like the Miller family. (NOTE: If ever you want to execute a successful crime, don’t bring your crackhead stripper girlfriend.) By the time we learn Jonah forgot to take his brain medicine today, the movie becomes a laugh riot of clichés and overwrought performances. In a way, it’s the funniest movie of 2011.

Schumacher is no friend of nuance, as those familiar with his Batman movies can attest. Key devises used later are established early on by jackhammer-subtle foreshadowing, such as when Avery’s friend almost drives into a telephone pole on a sharp turn. You can bet at some point later, someone’s crashing into that pole. Or the lighter Kyle finds by the pool; you just know he didn’t put it in his pocket for nothing. Will he light a last-minute fire? Yes, yes he will. Worse, the camerawork by Andrzej Bartkowiak zips around the room like a brutalized piñata, capturing frantic close-ups for an in-your-face approach that’s meant to be intense, but instead is just annoying. And then there are the performances, each categorized by their varying degrees of loud. There might be two scenes in the whole film where someone isn’t screaming at someone else.

The question is, what’s Nicole Kidman doing in this thing? After all, no one expects much from Cage these days, sadly. He’s cashing checks for any silly actioner he’s offered to finance his pyramid tomb and pay off his bankruptcy attorney. And for every occasionally credible rarity like Bad Lieutenant: Port of Call New Orleans, there are a dozen like Drive Angry 3D. Here, he looks puffy-cheeked and constipated throughout, and his indecipherable accent sounds like his mouth is filled with cotton. Kidman, on the other hand, is still considered an A-list actress, The Invasion notwithstanding. So what attracted her to this material, or was she just trying to pay for her recent onslaught of plastic surgery? Indeed, she looks frightful, her lips noticeably injected by some bonkers plastic surgeon unaware of what “consistency” means. In some scenes, it’s her upper lip that looks swollen and unnatural; in others, it’s her lower lip. But rarely does she appear natural.

As home invasion movies go, Trespass is a bad one, so bad even Cage’s usual over-the-top routine fails to eke out some entertainment value, not even for those with a soft spot for the actor (myself included). Millennium Films has dumped the release in “select theaters” (meaning discount moviehouses) for a week to avoid a dreaded “direct-to-video” brand, but finding the movie on various VOD platforms on its theatrical release date won’t convince anyone of its standing, celebrity cast or not. It’s a ridiculous, shrill, and obnoxious movie that becomes comical by the middle, yet downright frustrating for its all-around laziness. If you’re a fan of the genre, watch The Desperate Hours or Panic Room; save yourself from the agony of this experience, unless your Robot Roll Call of friends need something to riff.