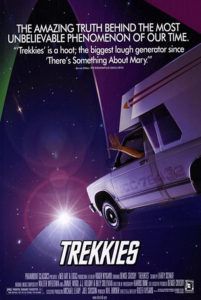 On Saturday Night Live in 1987, William Shatner appeared in a skit where he addressed a mock-Star Trek convention crowd and announced, “Get a life…” and “move out of your mother’s basement.” Thought to be made in jest by actual fans of the franchise, there was also some truth to the comment. Shatner was tired of being typecast as the iconic Captain Kirk and wanted his feelings known (despite this, he went on to make three more Trek films, including The Final Frontier in 1989, which he wrote and directed). Roger Nygard’s documentary Trekkies contains a similar level of duality. The film’s subjects, Star Trek fans known as Trekkies or Trekkers (there is a difference, which I’ll get to later), are depicted with equal parts respect and subtle mockery. Mostly the latter. The film does not insult or poke fun at them outright. But rather, it presents individuals who, through the filmmaker’s editing choices, are made to appear foolish, socially inept, and overly fixated on their diversion of choice. Meanwhile, the film also presents interviews showing the positive side of Trekdom, with former and current cast members of the program(s) offering their own amazement, appreciation, and raised eyebrows over this pop-culture phenomenon.

Narrated and hosted by former Next Generation star Denise Crosby (a.k.a. Tasha Yar), the film is an interview piece comprised of conversations conducted at, among other locales, various Star Trek Conventions, which occur every weekend in cities around the world. There, die-hard fanatics and casual viewers meet the talent in open panels, stand in line for autographs, buy an endless assortment of memorabilia, and dress as Klingons, Vulcans, and other aliens from the Trek-verse to better relate to one another. Auctioneers sell-off merchandise for big bucks, such as the Klingon head makeup worn by some actor on some random episode which a fan, dressed in full Klingon garb no less, picks up for $1,400.

There’s an undercurrent running through Trekkies about all the merchandise sold at these conventions, through the internet, at comic book shops, and elsewhere. More than the philosophy of Star Trek, people seem to enjoy the opportunity it affords them to spend their money. Dressing up in costumes or collecting action figures is fun, but expensive. What we learn in Crosby’s course of interviews is that Trekkies are, for the most part, smart people with an apparent abundance of money to burn. Spending most of my adolescence following the adventures of Captain Jean-Luc Picard and the android Data on The Next Generation, I suppose I too am a Trekkie. Some years ago, my significant other and I considered going to a convention to people-watch, meet a celebrity or two, and possibly buy a movie poster. After some looking online at the costs of the panels, the going rate for an autograph, and even the entry fee, we decided the price wasn’t worth the trouble. Maybe that means I’m not the most enthusiastic fan, or maybe it means I’m cheap. Whatever it means, I remain awed at how much financial stake Trekkies put into their vice. 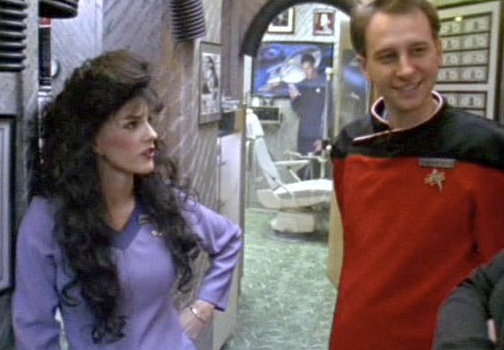 But be careful who you call a “Trekkie,” because fans take the distinction between “Trekkie” and “Trekker” very seriously. Some believe “Trekkie” refers to the earlier brand of fans whose love for the material began in the mid-1960s with the original series, and “Trekker” denotes everyone who came after The Next Generation in the mid-1980s. Trekkies seem more relaxed and comfortable about the whole thing, but Trekkers want to distinguish themselves as the serious-minded supporters. However, Kate Mulgrew, who plays Captain Janeway on Voyager, suggests a more logical definition: a Trekkie observes and appreciates from a distance, hence the inactive form of the noun, whereas a Trekker participates, thus the active form of the noun.

Whatever title you take, in the end, everyone has their own personal degree of fandom. Consider Barbara Adams of Little Rock, AR, who served as a Whitewater trial juror in full Starfleet dress, and asks that her boss at work call her “Commander” (try getting your boss to do that not in Star Trek uniform). Or there’s the dentist and his assistant wife who’ve decorated their practice, dubbed “Starbase Dental,” with every collectible you can imagine, hoping their patients can escape into the science-fiction the way that they do. Crosby gets red-faced in her interview when the couple admits to role-playing as various aliens in their sexual adventures, and occasionally the husband throws on a wig and pretends to be Tasha Yar. At least they’re happy, but let’s hope they’re not so open about their nocturnal activities with their children, who sit on an interview couch looking miserable in their Starfleet gear.

In some cases, being a Trekkie serves as therapy. Those who accept this label have something to cling to that’s a little more tangible than any religion or community center. At least a Star Trek Convention offers others like themselves interested in precisely the same thing they are. For the cavalcade of weirdoes and social misfits that make up this clan, they have an imagined community where friends are gathered in a safe place, away from their difficult day-to-day world. Nygard has a section featuring various Star Trek alumni recounting their heartfelt experiences with fans. One such story features James Doohan (a.k.a. Scottie) remembering how he urged a suicide case to keep meeting him at various conventions around the U.S., and how eventually her Trekkie-ness saved her life. If all these people need is Star Trek, then good for them in finding it.

However much Doohan’s anecdote glorifies the possible goodness of their subculture, Nygard would rather make persistent low blows with story after story about the not-always-healthy Trekkie behavior. At one of the aforementioned auctions, star John de Lancie (a.k.a. Q) appeared ill with the flu to conduct his panel. When he accidentally left behind his water bottle when he left, an auctioneer took bids on the “Q virus” contained in the actor’s half-empty bottle, which some deranged fan purchased and drank. Or there’s the self-proclaimed “Spiner Femme,” a woman dedicated to Data counterpart Brent Spiner, who has an extensive candid Spiner photograph collection and talks about how she can see the hill where Spiner lives from her balcony. And then there’s a subculture-within-a-subculture of enthusiasts who write their own porn scenarios where characters like Kirk and Spock or Data and Yar hook up in sexually explicit fan literature.

It’s all handled with a wink, distributed by Star Trek’s home planet of Paramount Pictures, but produced independently and obviously shot on a cheap video recorder. Because Paramount wasn’t involved until after filming was complete, headline stars like Shatner and Patrick Stewart are conspicuously not interviewed, so the film feels appropriately small. By the end, viewers will feel exposed to a 90-minute freak show, hilarious and occasionally appalling, but always entertaining, and even good-hearted and appreciative toward the fans. That Trekkies doesn’t take a more socially critical look at its topic and resolves to be merely light entertainment is the documentary’s biggest flaw, especially considering how fandom and nerd culture have evolved since the film’s release. But while it’s almost completely devoid of substance, the experience makes for easy diversion for a Trekkie, Trekker, or whoever else might be interested.